Today is International Day of Prayer for the persecuted Church. Here are 3 ways you can pray

340 million Christians experience systematic discrimination, unfair treatment and persecution for following Jesus. Here’s how you can pray for them today 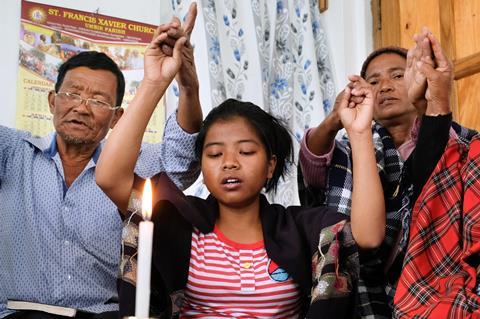 It’s a night that Youssef from Egypt will never forget. A van with five armed men pulled outside the small shop owned by his 68-year-old uncle, Bakhit. Youssef watched as one of the men broke in and, at gunpoint, forced Bakhit out of the store and dragged him into the van.

Youssef approached the men, thinking they were police, when one of the men requested Youssef’s ID card – which clearly identified his religion.

“When he saw my ID card and realised that I’m Christian, he asked me if I was related to Bakhit,” Youssef says. “I said, ‘He is my uncle.’ That’s when they pointed a gun at me and put me in the back of the van with my uncle and fled.”

Inside the van, the group threatened to kill Youssef and Bakhit if they said anything. Then darkness came – Youssef and his uncle were blindfolded. After the van stopped, the two were separated, and Youssef remained blindfolded for the next 13 days.

During that time, Youssef was insulted non-stop and, each day, he received only one meal. But he experienced God’s comfort – and he knew people were praying for him. “I felt the prayers,” he says. “I knew my family, members of my church and many Christians were praying for me and my uncle.”

The thirteenth day arrived and Youssef was let go. Bakhit was released four months later. The two men come from the only Christian family in the village. They were targeted because of their faith.

Today is International Day of Prayer (IDOP) for the persecuted church. Youssef’s story is a reminder that, while our prayers don’t always alleviate the suffering of our persecuted brothers and sisters, they still carry tremendous power.

It’s an experience shared by many persecuted Christians. Azamat comes from Uzbekistan, a country where Christian freedom is stifled through tight restrictions and intrusive surveillance, and believers from Muslim backgrounds can encounter hostility. “Tell the people who pray for us that we feel their prayers,” he says.

Open Doors estimates that 340 million Christians experience systematic discrimination, unfair treatment and persecution for following Jesus. Globally, it’s getting harder to follow Jesus, making it increasingly imperative that we keep standing in prayer with those who share our faith but not our freedom.

Today presents a wonderful opportunity to remember our persecuted family. Here are three ways you can pray for them:

Across sub-Saharan Africa, Islamic militants have forced many believers from their homes. Christian men have often been killed to destabilise livelihoods. The military coups in Myanmar and, more recently, Sudan have left Christians struggling for survival. In many countries, Christians have been left hungry after being deliberately overlooked in the distribution of government Covid-19 aid.

There are also spiritual and emotional needs to pray into. Churches are left vulnerable if the pastor is arrested, or congregations need to split into smaller groups to avoid detection. Lack of Bibles and other Christian resources can impact spiritual growth. Meanwhile, many Christians encounter severe trauma and require specialised care.

Christians globally face intense pressure to renounce their faith. Those who convert from another religion can face severe consequences from their own families and communities. This can include rejection, discrimination and even death. Many of them have little or no access to other Christians, especially if they choose to keep their faith secret.

The pressure can come elsewhere. Paul from Kenya was shot dead by al-Shabaab militants after refusing to recite an Islamic creed. In the Middle East, Taher refused to provide the names of other Christians, despite being told by the authorities that failure to do so would put his family at risk. Your prayers can help our brothers and sisters stand firm when the pressure is greatest.

Despite the persecution facing believers globally, the church continues to grow. It’s remarkable that in places like China and Iran, where the state is deliberately attempting to supress Christianity, the opposite is happening. It’s testament to the power of the gospel and God’s ability – often through prayer – to work through suffering to spread the good news of Jesus.

In Central Asia, a policeman visited the home of an underground pastor to arrest him. He wasn’t there but his 10-year-old daughter was. She welcomed the man in, cooked for him and said he was a ‘good man’ during a prayer. When the pastor returned, the man said, “What is this about your Jesus? Can you explain this to me?” The man became a Christian.

Many Christians don’t ask that persecution will stop but that God will be glorified.

“The gospel is bearing fruit and growing throughout the whole world,” Paul said in Colossians 1:16. It truly is – including places where following Jesus costs the most. But for the church there to not just survive but thrive, your prayers remain desperately needed.

“Prayers make miracles,” Youssef concludes. “When we pray together, we feel that God stands up with us, keeps us, and we feel inner peace. Thank you so much for standing with us through your concern and faithful prayers for us.”

To mark International Day of Prayer (IDOP) for the persecuted church, Open Doors, CSW, Release International and the Evangelical Alliance are joining together tonight for a special online event. There will be updates about Nigeria, Eritrea and India, and opportunity to pray for Afghanistan. It runs from 7.30pm until 8.30pm, and you can book your free place here.

Some names have been changed for security reasons

Ben CohenBen Cohen is the head of media and PR at Open Doors UK and Ireland, a charity that speaks up for and supports Christians around the world who are persecuted for their faith. When he's not gazing at a screen he is frantically unpacking his life's artefacts or looking at the world slightly askance.
Follow @https://www.twitter.com/@OpenDoorsUK