Labour’s shadow home secretary has been embroiled in a debate over feminism and trans rights this week. George Pitcher suggests that politicians aren't the only ones trying avoid the 'rabbit hole' of gender politics. The Church of England is too. 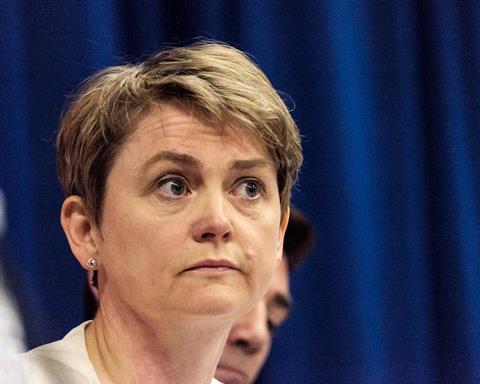 Yvette Cooper, Labour’s shadow home secretary, swerved the question of what defines a woman on Times Radio this week, in the vexed debate over transgender rights. She said that she wasn’t going to go down “rabbit holes on this one.”

She’s not the only one. Anneliese Dodds, Labour’s shadow minister for women and equalities, also prevaricated on BBC Radio 4’s Woman’s Hour, saying somewhat vaguely that “there are different definitions legally around what a woman actually is… you’ve got the biological definition, legal definition, all kinds of things.”

Labour leader Keir Starmer got it in the neck for stating unequivocally that a transgender woman is indeed a woman, in law, which as a former director of public prosecutions he might be expected to know something about. With Starmer in her cross-hairs, JK Rowling pressed the nuclear tweet button, claiming this was “yet another indication that the Labour Party can no longer be counted on to defend women’s rights.” Little wonder that Cooper and Dodds, indisputably women, donned their tin hats.

Rowling has passionate form on the issue. It started with her post of some two years ago, satirising those who adopted euphemisms to avoid binary gender definitions: “‘People who menstruate.’ I’m sure there used to be a word for those people. Someone help me out. Wumben? Wimpund? Woomud?”

It’s like the sarcastic phrase “If only there was a name for…”. It’s the device used by those who claim that the answer is blindingly obvious. And that those who can’t see it are making a massive category error, the mistake of ascribing to something the characteristics of something quite separate.

In gender politics, the Church of England has been charged with making two such massive category errors. The first was the ordination of women priests in the 1990s. The category error arose as a consequence of a campaign conducted principally on issues of equality – in ministry and before God. But opposition in conscience to women’s priesthood from the catholic traditions, both Anglo and Roman, isn’t predicated on equality. Instead its argument is predicated on an interpretation of scripture and views regarding the created order and apostolic succession. This isn’t about equality (it is said), it’s about difference – and to argue that the genders are the same in this respect is to deny the created order and, therefore, to make a category error.

Like Labour’s women ministers, the Church declines to address the difficult issues of gender politics until forced into errors

I respect that view, but I don’t buy it. Not least because the ministry of Jesus of Nazareth is radical enough to make it clear repeatedly that imago dei, the image of God that humanity bears, isn’t gender-specific. And exclusively male apostolic succession doesn’t make much sense on Easter morning in a few weeks’ time when the greatest apostolic mission in the history of creation is granted to a woman, Mary Magdalene, who is told by the risen Christ to go to tell her brothers and sisters what she has witnessed.

There is a clue to the status of her mission in the title bestowed on her of “Apostle to the Apostles”. So, again, it would seem that to deny her holy priesthood is actually the category error.

The second thorny issue of gender politics in the Church is gay marriage. This has again been conducted on territory of social equality rather than theology. David Cameron allegedly needed a social issue a decade ago on which to strut his liberalism to appease his coalition partner and leader of the Liberal Democrats, Nick Clegg, who has subsequently gone to enrich himself at that bastion of liberal thought, Facebook.

Those who oppose gay marriage have their strongest argument in the created order and their weakest in tradition. For the Church, marriage is a gift of God in creation, a sacrament, whereby a man and a woman recreate the divine conjugality as outlined above. That’s what it is and it ceases to be that if we decide it is something else – as the cynic might say, “if only there was a name” for a man and a woman coming together like this.

Again, it is about making a category error rather than solving an issue of inequality. The Church would have saved itself the agony it now endures over hosting same-sex weddings if it had had a liturgy for blessing such unions – as it should, being in the business of blessing God’s love wherever it is found. Equal in the eyes of God, but different. As it is, we’re lumbered with uniformity rather than equality.

The problem our Church has is that, like Labour’s women ministers, it declines to address the difficult issues of gender politics until forced into errors. It should assist wider secular society to avoid category mistakes. Because rabbit holes can be theological as well as political and we have a responsibility to explore both.