Swearing’s OK but ‘snowflake’ is not: what Ofcom’s latest ruling says to Christians

The media regulator say people are less offended by swearing on TV but care more about discriminatory language. But do we need to legislate against insults like ’snowflake’ and ‘gammon’ asks MP Tim Farron, or do we just need to disagree better? 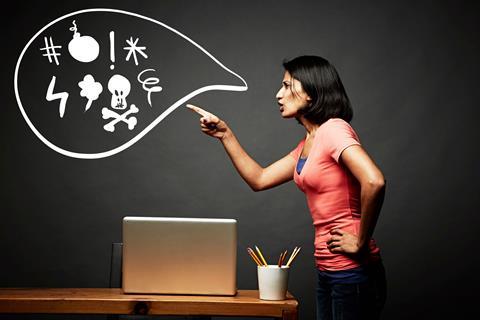 This week, media regulator Ofcom has published its latest research into what viewers and listeners find offensive. It found that people are less likely to be concerned about swearing on TV but are more opposed to language that is seen as discriminatory. But the term ‘discriminatory’ casts a wide net and various newspapers have had fun railing against the potential ban on words such as ‘snowflake’ and ‘gammon’ when used as insults.

Ofcom emphasises that freedom of expression is important but that audiences should also be protected from “unjustified offence”, based upon what people tell them they find offensive. This research reflects a trend in our public discourse, where people use their feelings of offence as a basis to make personal attacks on others for their views and where, in some situations, people may actually feel physically unsafe because of the words of others.

Hostile debate has always existed, and politicians have often been some of the worst perpetrators. During the Brexit debates, MPs have been guilty of some terribly disrespectful, incendiary language. But the rise of social media has led increasing numbers of people to become targets of hatred and abuse online, and sometimes this has crossed over into real life. Brexit has largely receded as a topic of abuse but it seems to have been replaced by disputes over the increasingly inflammatory identity politics.

Talk of ‘safety’ may seem extreme to some, but for others – particularly those who form minorities that face hostility in their day to day lives – a visceral fear for their own physical safety and freedom is very real. Our political discourse has sunk to a desperate level when disagreements threaten to spill over into physical violence. Perhaps this is part of the rationale behind Ofcom’s desire to protect audiences.

Why are we increasingly unable to disagree well with one another without causing and giving offence, to the extent that we are required to be “protected” through censorship by regulators and governing bodies of institutions such as universities?

Jesus is our ultimate safe space

In part we are influenced by events across the Atlantic. In The Coddling of the American Mind, lawyer Greg Lukianoff and psychologist Jonathan Haidt talk of the rise of a culture of “safetyism”, particularly seen in universities; an obsession with eliminating threat and challenge and a need to create emotional “safe spaces” away from ideas and opinions that might question or oppose our dearly-held beliefs and threaten our very personhood.

An epidemic of insecurity

This is symptomatic of the epidemic of insecurity that we are experiencing in the West. Our individualistic culture places ourselves at the centre, and we increasingly expend our energy defending ‘my right to be me’ in a fragmenting society. This makes us extremely sensitive to criticism from others of our identity or lifestyle.

Speech itself is experienced as a form of violence, to be judged on the impact it might have, rather than on the intention of the speaker. Unsurprisingly people fear their words will be misinterpreted by others and are increasingly afraid to speak up. This is exhausting and can take a huge toll on our mental health.

Silence in the middle

As a result, moderate voices cease to be heard and arguments are increasingly polarised. And if we find ourselves getting angry about ‘woke culture’ or ‘gammon beliefs’, then I am afraid we have stopped seeking to understand other points of view; we have ceased to be moderate and have ourselves become part of the problem.

So what can Christians bring to this situation? Firstly, we need to acknowledge that we are all imperfect and that the institution of the Church is tainted in the world’s eyes: it has often harboured people who have misused their power and position to abuse others and for their own gain. We should not expect an easy hearing.

We should not remain neutral through fear, but we must model a better way

But the Church has an amazing healing treasure to hold out to our hurting society. Jesus promises to be our hope and our security. He is our ultimate safe space.

He knew about having his identity and his existence threatened. He experienced the anger of the mob and physical violence that led to His death. But his death was not meaningless. He died for our right to exist. And he loves us unconditionally. He stands now with his arms open to welcome the insecure and the hurting, on all sides. He promises to bind up the broken hearted and set the captives free.

But this is the challenge: He wants to do it his way and not ours. He does not promise to simply endorse our beliefs and behaviour - and this is our culture’s stumbling block. It is hugely counter-cultural to realise that we are not living primarily to please ourselves; we are called to give up our self-created identities and accept our identity in Christ. He asks us to swallow our pride and put our trust in him, rather than ourselves. He wants us to accept his sovereignty over our lives.

This is radical, revolutionary and counter-cultural to every generation, not just ours… and that’s just one clue to Jesus’ abiding authenticity.

It is also enormously difficult. But it is also liberating when we grasp his promise that he will carry our burdens for us. He calls to us in the words of Matthew 11: “Come to me all who are weary and heavy laden, and I will give you rest”. We no longer need to expend all our energy in advocating for our own existence. It has already been accomplished.

Jesus offers the knowledge that our identity is secure in him. We are created to be in relationship with him and we are completely loved. He offers us rest for our souls and strength in our struggles.

And with this knowledge comes a further challenge. As Christians we need to engage in debate and to show that it is possible to treat one another with kindness, grace and respect whilst still expressing our opinions. We should not remain neutral through fear, but we must model a better way, one based upon love.

Most importantly, in this age of Twitter diatribes and angry exchanges, we need to forgive those who offend us. If forgiveness was easy, there wouldn’t be so much in the Bible about it. But Christ shows us how to turn the other cheek and keep on loving each other.

There are important discussions to continue in the public sphere around the extent of freedom of speech versus the importance of protecting individuals from intimidation. But the way that we behave towards one another ultimately comes down to our own choices. It is about responsibility and civility. It is about valuing each other’s humanity, respecting opposing views and remembering how to disagree well. It is about remembering that we are each made in the image of God and living in that knowledge.

The battle is real

People’s struggles to validate their identities are real and personal – they touch the very core of who they are. This is why people become so angry, and this should not be lightly dismissed. Putting our faith in Christ is not an instant panacea for all our struggles. As long as this world exists there will always be battles for those who feel they are being treated unjustly by powerful institutions and self-serving individuals.

There is a temptation for Christians, as we seek to be gracious, to slide into being just inoffensively nice, holding to a kind of soppy neutrality about things. I am sure that we are not called to be like that. We must fight injustice in the world when we see it, but Christ wants us to do it in his strength and from a place of security of our identity in him.

Ultimately, Christ is the world’s only hope. There is no plan B. We cannot save ourselves through self-liberation, but we can point people towards the Way. And in today’s increasingly partisan, intolerant and censoring society, if Christians want to maintain our freedoms to disagree and criticise, to argue and debate, and to hold out Christ as a hope for our world, we need to learn to do it well. Otherwise we may lose these freedoms altogether.