Please don’t throw away your mask. Wearing it is the Christ-like thing to do 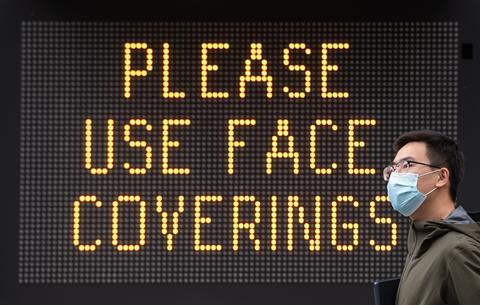 It appears that the choice about whether to wear a piece of cloth on our faces has become the latest front in the culture war.

I don’t know anyone who isn’t sick of all the restrictions we have had to endure over the last 16 months. We all long for a return to some normality, and this includes the ability to walk around in public indoor spaces without a mask. As someone who spends up to eight hours a week on public transport, commuting between London and the Lake District, I can say that it is a little bit uncomfortable to be masked up for all this time.

But now, after months of telling us what to do, and as vaccinations start to protect us from the virus, the government is emphasising personal responsibility rather than rule-keeping. And the choice to wear a mask, or not, is getting controversial. Which is odd, because no-one loves rules more than the British. We cannot abide the crime of queue jumping. It’s just plain rude. But I reckon that choosing to throw away our masks while Covid cases are shooting up all over the country is a far worse faux-pas than queue jumping.

I have seen some Christians getting especially outraged at mask wearing, celebrating their de-masking in ways that make me think of Mel Gibson’s battle cry in Braveheart.

Perhaps we are in danger of getting caught up in the echo chamber of our own culture war tribes, so outraged at the provocative comments of the other side that mask-wearing (or not) is in danger of becoming some kind of dreadful virtue-signalling. I’ve even seen some people, those who want to continue the bitter Brexit battles of the last five years and exert power over the choices of the other side, using mask/no mask as a proxy for Remain/Leave. I hope I’m not the only one who thinks that this is ridiculous.

The whole debate needs reframing. To wear a mask or not has been presented as a clash between the sunlit uplands of freedom and a fear that clings to draconian restrictions; an excuse for the government to use Covid to maintain indefinite control over its citizens. But we should surely view it instead as a sign of care and compassion for those more vulnerable or at risk, or – yes – more fearful than we might be.

Wearing a mask in an enclosed space is basic politeness, like deciding not to break wind in a lift

The whole point of wearing a mask is to protect each other, not just ourselves. Studies (as opposed to that post you saw on Facebook) clearly show that masks help mitigate the spread of droplets from your mouth if you cough, sneeze or laugh. And after months of restrictions, many people are understandably nervous about a big-bang bonfire of everything we have come to hate. This will include those who are still clinically vulnerable, many people with children, who are at low risk of getting very ill but are still catching and transmitting the virus, and those who are simply anxious.

Have we become so exercised by the need to protect our personal freedoms that we have lost the far more important need to consider others? Have we become so convinced that the ‘other side’ has a nefarious hidden agenda that we’ve forgotten the basic principles of human compassion?

We might want to be free of the mask for ourselves, but we may need to accept that hardship for others

Those for whom mask wearing causes a genuine problem are already exempt. For the rest of us, it’s a minor inconvenience. Wearing a mask around others in an enclosed space is basic politeness, a bit like deciding not to break wind in a lift. People who do choose to break wind in a lift are not warriors for freedom, they are extremely unneighbourly and antisocial.

Sorry to be flippant and vulgar, but there is a serious point here: Christians often criticise our highly individualistic culture because, in the Bible, we are charged with meekly accepting our own suffering and persecution, being far more concerned about the rights and wellbeing of others than our own. On the issue of mask-wearing are we at risk of doing the opposite? We might want to be free of the mask for ourselves, but if we are to be good neighbours, we may well need to accept that hardship as we seek to care for others.

Jesus did not demand his rights and freedoms. He could have called down angels from heaven to free him from the Roman authorities, but instead he voluntarily gave everything up for us, because he loves us. Personal responsibility is not about defending our rights at all costs, or calling people neurotic because they aren’t ready to give up on mask-wearing just yet. It is about remembering that we are constantly in relationship with others and should be treating them with the love and compassion that Jesus has shown to us.

And, you know, wait until you get out of the lift.