Street preachers keep being arrested. I have a plan to stop this from happening

Ideas that offend, shock and disturb are permitted, due to our nation’s free speech laws, says Paul Diamond. So why do Christians keep getting arrested for street preaching? 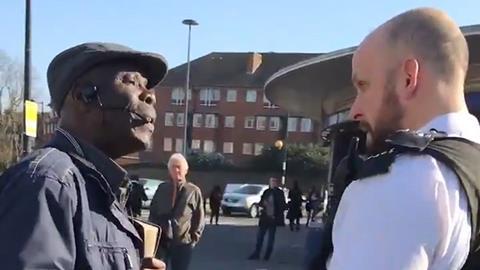 Footage of Oluwole Ilesanmi pleading with police to not “take my Bible away” (pictured, above) was viewed online almost three million times. The street preacher was later awarded £2,500 for wrongful arrest. Other cases include the 71 year-old pastor John Sherwood who was arrested after preaching outside Uxbridge Station in April 2021 and Ryan Schiavo who was arrested last July after preaching on the streets of Orpington, Kent, that homosexuality is a sin. Both preachers were later released without charge. Meanwhile, four preachers accused of making “inflammatory remarks about gays and Muslims” in 2016 are appealing a court judgement that they were lawfully arrested.

If you read the news, it appears that the police keep arresting Christian street preachers - though, in reality, many preach in our shopping centres every Saturday and never attract the attention of our men and women in blue.

Those who do get arrested are usually released without charge, demonstrating that they should not have been taken off the street in the first place.

Over recent years, there’s been a worrying and increasing chilling of free speech in the UK. The reaction to street preachers by members of the public, and police officers is just the latest in a series of ways in which those who speak out their Christian views can find themselves on the wrong side of the law.

I’ve worked in the field of Christian and human rights for over 30 years, representing Christians in the High Court, the Supreme Court and in the European Court of Human Rights. In my view, the time has come for a ‘Street Preacher’s Charter’ – a set of guidelines which makes clear the law on freedom of speech - both to street preachers, and for bobbies on the beat who, increasingly, have little understanding of the Christian faith or, why Christians might want to share the gospel.

Police officers are hard-working, committed individuals seeking to improve the lives of law-abiding members of the community. They follow the instructions of their political masters: whether or not they agree with them.

The role of the police should be to keep people safe and to promote freedoms; not repress them. Or, as in the recent Harry Miller case, use the "chilling effect”, as one Judge put it, of unlawful means, intimidation, or threats to prevent the expression of ideas - such as Miller had done when speaking out against transgender ideology.

Now that the police have been told not to intimidate, nor record such incidents in the way they have, we must find a means to move forward. A court judgement is only part of the struggle we have to restore free speech; it will not be enough in itself, but it is a useful building block.

Free speech is an inalienable right: and cannot be subject to the vicissitudes of our political leaders. Like the Soviet Union, the terms of debate are constantly changing and uncertain, so for some, the answer is to say nothing that risk being found to have bourgeois views. But that’s not an option for Christians when it comes to our gospel message.

Free speech is not in robust health in the United Kingdom

Now is the time to work positively and creatively with the police, and to work in good faith. The police must protect free speech. They need to protect those who offend others: from Islamists to the woke warriors.

Police need fresh guidance and guidelines on how to promote free speech: for how to handle street preachers, and how to protect those who say things we dislike. To that end, I have recently written to the College of Policing with a view to working with them on these issues, seeking to agree with them a nationwide ‘Street Preachers Charter’.

There needs to be a right to offend, as is upheld by law. Officers must arrest first, those seeking to shut down speech, or seeking to disrupt such speech; and should public safety concerns make this impractical, ensure that the speaker in question (ie. street preacher) is given an alternative venue and time in which he can speak.

Unless we protect free speech firmly, cancel culture will close down our right to speak out.

Free speech is not in robust health in the United Kingdom. The woke agenda of the mainstream media; the speech codes at university, the dismissals from employment for believing marriage is between a man and a woman, the denial of a public facility for the wrong views. I could go on.

Free speech is the right not only to speak ideas that will be favourably received but also those that ‘offend, shock and disturb’.

Oppressive societies stifle innovation, create divisions (much greater than the division that we are seeking to prevent) and create dissident opposition. Free speech requires an open culture of tolerance; not the current climate of fear.

Religious speech is a particularly controversial type of speech that will need specific protection: as it is directed to those who do not want to hear the speech, seeks to convert and reminds us of an odd concept known as ‘sin’.

At the end of the day, we are either a mature society that can handle controversial speech, and resort to the time-honoured means of disapproval, namely the use of stigma and disdain or, we are a society not mature enough for such speech and democratic rights will soon fall. We must create a ‘free market’ in free speech and prevent dominance in the market of a monopoly viewpoint.

Paul DiamondPaul Diamond is a leading Christian and human rights barrister who has argued many ground-breaking cases; on religious rights, freedom of speech and civil liberties. He handles some of the most controversial cases in the national courts; from freedom of religion to issues such as abortion and gendercide.