Muslim film protesters have no right to not be offended

People are perfectly within their rights to peacefully protest, but bowing to threats creates a dangerous precedent that undermines the Christian values of freedom of thought and belief, says James Mildred 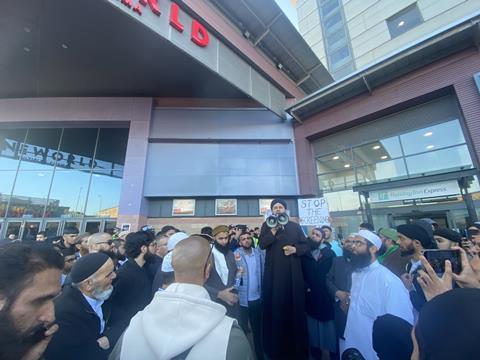 “We have a right not to be offended.” That’s what a Muslim man, protesting outside Cineworld in Bradford, said recently. He, along with others, were furious that the cinema was showing a new film called The Lady of Heaven.

Written by Shia cleric Yasser Al-Habib, the film is a British-produced epic historical drama about Fatimah, the daughter of the Prophet Muhammad. It has been billed as the first film ever to tell the story of her life and depicts her death, describing her as “the first victim of terrorism.”

Executive producer, Malik Shlibak, told Sky News that the film tells the story of Lady Fatimah’s struggles; the journey she went through. “We believe she is the best figure in history for us today to learn from, to know how to tackle things such as extremism, radicalism, and corruption”, he said.

But the film has caused a wave of furious protests by Muslims who condemn it for depicting the Prophet Muhammad. Others have warned it will whip up sectarian tensions between Shia and Sunni Muslims. These are the two main groups within Islam, and both have different versions of the story portrayed in The Lady of Heaven.

Shahid Ali, a cleric who organised the protest outside the film in Bradford said the film presents a “false narrative of the early caliphs of Islam…of them being terrorists.”

We live in a pluralist society, where different views exist in our communities

The British Board of Film Classification (BBFC) classified the film as 15 because of strong bloody violence, gory images and threat. However, they also said there was nothing in the film that exceeds guidelines or makes it unsuitable for classification.

In the end, Bradford Cineworld decided to pull the film for the sake of staff and customer safety. In a tweet, free speech campaigner Baroness Claire Fox said the decision was “disastrous for the arts”, “dangerous for free speech” and “a lesson to those who argue identity politics are no threat to democracy”. Watching the events unfold last week, it’s hard to disagree.

Within the public square, this seems to be to be the fundamental problem at the moment in how we discuss and debate. Too many groups and too many people seem to think that being offended is a crime. It’s not. We live in a pluralist society, where different views exist in our communities. We vote differently. We think differently. We hold to different faiths - or none at all. We are free to discuss and to debate. And when it’s done well, we can learn from each other. But the discussion never gets going if the moment we’re ‘offended’, we just leave the conversation.

Too many groups and too many people seem to think that being offended is a crime. It’s not

What’s more, some of the video clips from various protests were disturbing. In one, a young Muslim man warns there will consequences for the actions taken. He’s referring to the decision to show the film. Exactly what these ‘actions’ are is left unsaid but the threatening tone is disconcerting.

I think we need to confront a hard truth here. Islam as a religion involves the concept of holy war. It is a system that includes the idea of domination. Purists within Islam want the movement to crush all other cultures, so the entire world is brought into line with Islamic tradition.

That is a direct threat to the principles of freedom of expression, freedom of thought, freedom of conscience, freedom of assembly, freedom of religion and speech. These values, by contrast, recognise the reality of the world we live in. They come from Christianity, which teaches that all of us are made in God’s image, and each one of us has a God-given autonomy and conscience.

In this country, there is a right of protest, too. So, I’ve no real issue with Muslims expressing their anger. But shame on cinemas for bowing to it. Shame on the police for not addressing some of the threatening language used. And shame on those who would seek to shut down debate and discussion. Our society is the poorer for it.