As the US Supreme Court returned the right to decide abortion policy to individual member states this weekend, there was celebration and protest across America in equal measure. But what does the ruling really mean, and should Christians welcome it? Lois McLatchie gives her view 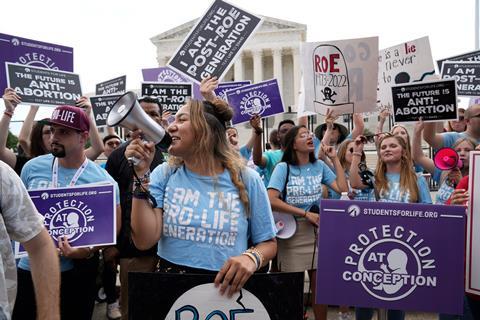 The world has erupted this weekend in an explosive debate about one of the most fundamental questions of our time. Things sparked off on Friday with the US Supreme Court’s decision to overturn Roe v Wade, heralding one of the most historic shifts in abortion law that many of us have seen in our lifetimes. It’s a divisive topic filled with emotion. And it’s also one of the most important issues that society grapples with. The Church’s response is critical. How do we make sure we find ourselves on the right side of history?

What the ruling means

It helps to first understand what has happened, beyond the chaotic media and Twitterverse smoke. In essence, the US Supreme Court has recognised that it was wrong for nine male justices to implement an extreme blanket abortion regime on the entire country back in 1973. In contrast to countries like the UK, where abortion is illegal with exceptions, at the time, Roe v Wade put the US in a category of only six other countries – including China and North Korea – to legalise abortion through all nine months of pregnancy. While later case law allowed some states to choose to regulate abortion to some extent in the latter half of pregnancy, others, such as New Jersey and Oregon, put no term limits on the availability of the procedure. This stands in extreme contrast to Europe, where the median time limit for abortion on demand or on broad social grounds is 12 weeks’ gestation.

As of Friday, each US state now has the freedom to determine its own abortion laws, in accordance with the will of the people. The hope is that as each state grapples with their abortion legislation they will be informed by the vastly evolving medical and societal research that points irrefutably to the need to protect unborn life. Times have changed since 1973, after all. We must be willing to follow the science. The widespread and common availability of the ultrasound has been one major advancement that should inform our treatment of unborn children. We now know that at six weeks, an unborn child has a beating heart and by 15 weeks, unborn children can suck their thumbs, have fully formed noses, lips, eyes and eyelids. Recent research shows that they may feel pain from twelve weeks, or even earlier.

According to BBC polling, one in five women who have had an abortion say they felt coerced into it

Against the backdrop of media outrage that Roe is gone, it’s worth considering how grossly unpopular the American abortion landscape under Roe would be in our own context. In the UK, 70 per cent of women say they would like the gestational limit for abortion to be lower than the current 24 weeks. Strikingly, few women actually support free and unlimited abortion on demand, with no exceptions, up until birth. The majority clearly recognise that unborn children are entitled to some form of protection. This is at the heart of the matter in the Dobbs v Jackson Women’s Health Organization case (which led to Roe v Wade’s eventual overturning) and common-sense limitations on abortion access is something we should all be able to get behind.

The headlines, of course, read otherwise.

How should Christians respond?

The dominant narratives speaking out against the Supreme Court’s decision pit mothers against babies in this culture war. They would have Christians think that we can only support one. It is imperative that we refuse to choose. Both lives in a pregnancy are worthy of care and protection.

The Bible is clear on the distinct value of each human life. God told Jeremiah: “I knew you before I formed you in your mother’s womb. Before you were born I set you apart.” (Jeremiah 1:4-5, NLT). Furthermore, the gospel holds a radical message of human equality that changed the landscape of human rights forever – eradicating the social chasm between Jew and Greek, slave and free, male and female. It’s the message of hope that set the tone for justice for the oppressed in our world to this day. Yet the abortion industry discriminates between children based on their age, their circumstances at conception, their ability to contribute to society and, in some cases, their sex or whether they have a disability.

Today’s culture has not only devalued the life of children, but has failed women through abortion. Abortion says that women can’t succeed in their careers if they are mothers too. It says that there is no support for women to raise their children and to flourish in every aspect of their lives; that there’s not enough help for both persons to thrive. According to BBC polling, 15 per cent of women – that’s almost one in five - who have had an abortion say they felt coerced into it. Some are pressured by partners, parents or friends. Others face heavy socio-economic pressure. Jesus’ ministry was one of ground-breaking respect and support for vulnerable women. The Church can and must be a light to those in dark situations.

The pro-life message, then, is one that champions equality and actively supports the vulnerable. There is nothing progressive about a society which dismisses the lives of its weakest members. This ruling has, of course, no legal impact in the UK. But it shows us that abortion is an unsettled matter that needs further attention. The right side of history cannot fail to be that which recognises the dignity and value of every person without qualification, supporting both lives to flourish in a pregnancy.

Christians, then, can take a moment to welcome this decision; to note that this is a long overdue correction of a false right that was not only fabricated by an undemocratic court, but was harmful to women, children and society. We can celebrate. And then, we roll up our sleeves. We meet the needs of women in crisis situations, we provide better options than abortion, we protect the most vulnerable and youngest members of our human family.

There’s lots to do. So let’s get started.

To read an alternative view on why overtirning Roe v Wade is not good news for all Christians, read Megan Cornwell’s piece here