Sending refugees to Rwanda is a cynical, callous idea. The bishops are right to oppose it

The UK’s first asylum flight to Rwanda was cancelled after intervention by the European Court of Human Rights. With every Church of England bishop, Christian charities and even the Prince of Wales decrying the policy, it’s time the government listened, says Caroline Gregory 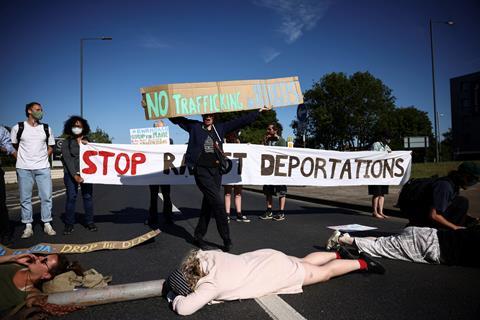 Morality is a flexible concept in politics. If it suits their agenda on a particular topic, a politician will appeal to the moral argument; if it doesn’t, they will focus instead on so-called practical aspects. The opposing party will inevitably take the opposite view. It seems vanishingly rare that morality takes the position it should as a deciding factor for the policies we all have to live with.

Considering that the UK already fails dramatically in its commitments towards refugees, the government’s scheme to send asylum seekers to Rwanda represents a new moral nosedive. This cynical, callous idea flies in the face of the 1951 Refugee Convention, that asylum seekers can claim in any country they choose. Now, that choice is being removed from them.

If the only barrier to government pursuing a policy is the legal system, we are in big trouble

A handful of countries take responsibility for the majority of the world’s refugees, most of them desperately poor and ill-equipped to do so. In Lebanon, nearly a quarter of the population is made up of refugees. In Turkey it is five per cent and in Liberia, just over four per cent. How does the UK compare? Just 0.26 per cent of the UK’s population is comprised of refugees and asylum seekers. As the sixth richest country in the world, it is impossible to justify this.

The clamour of opposing voices is loud this time, ranging from all of the leading charities working in this area, to the Public and Commercial Services Union (which represents most Border Force staff). The Archbishop of Canterbury was famously scathing in his criticism of the plans during his Easter address and since then, all 23 CofE bishops in the House of Lords have followed suit, condemning the move in an open letter to The Times. It is the only occasion when all the Lords Spiritual have acted in unison on a single issue. Last weekend, Prince Charles’ alleged comment that the scheme is “appalling” was reported as the royal family stepping outside of its politically neutral stance – but surely some topics transcend politics and simply become moral issues. There is no doubt that Prince Charles would have criticised the idea no matter which party had proposed it.

If a government is not prepared to listen to such a cohort, are they really representing the people? The rest of us are compelled to follow the advice or rules of people in positions of power, but the idea that government ministers actually listen to those in the know frequently seems little more than tokenistic. Their mandate to represent us should not end once they are voted in, only to emerge once more in manifestos as an election looms.

In an example of politicians - and the media - cherry-picking which parts of a story to share and which to withhold, these asylum seekers are once again described as “illegal”, without mention of the fact that no legal means for them to claim asylum in the UK exists. And the well-worn argument that these schemes will discourage asylum seekers from coming to the UK has been proven false over many decades, as has the idea that most asylum seekers are not real refugees. Even as preparations were being made to deport a handful of asylum seekers to Rwanda on the first flight, several hundred have arrived across the Channel. Some deterrent!

Politicians claim schemes such as this are about safety, discouraging people from dangerous journeys, yet no government scheme in recent decades has shown any concern for the safety of vulnerable asylum seekers. Creating safe, legal routes to claim asylum in the UK is where the money and effort need to go.

A handful of countries take responsibility for the majority of the world’s refugees, most of them desperately poor

Amid the staggering financial and environmental costs of flying handfuls of asylum seekers half way around the world, it is worth remembering that Rwanda is barely able to meet the most basic needs of its own people. A little over half the population has access to clean water. Safety and security in the region are still concerns, and unemployment is high. So how can it possibly be a safe place to send others by force?

Isaiah 58:7 tells us: “to share your food with the hungry and to provide the poor wanderer with shelter…not to turn away from your own flesh and blood”. It is difficult to conceive of a greater turning away than sending those most in need over 4,000 miles to a developing country. The concept of paying someone else to deal with our problems is reminiscent of the way the UK also ships its plastic waste to the world’s poorest countries; it’s a deeply offensive attitude. There is no dignity or honour in this attitude towards the needy.

Ahead of the intervention of the European Court of Human Rights (ECHR), the UK Court of Appeal ruled that the flights to Rwanda could go ahead. BBC correspondent Dominic Casciani explained how the court showed that safeguarding concerns about human rights “are not a bar to the government pursuing its policy objectives if the law appears to be correct.” For Christians, this should immediately ring alarm bells. If the only barrier to government pursuing a policy is the legal system, we are in big trouble. In the light of the ECHR ruling, Boris Johnson has already told reporters that “it may very well” be “necessary to change some laws to help us as we go along.”

Legal processes pretend to operate in a vacuum, separate from morality, emotion and, often, common sense. But this separation is illusory and unnatural. It forgets that laws are created, and enforced by fallible, fallen humans with their own biases and, therefore, cannot be elevated to something they are not.

As Christians, we should be so grateful that we have been given, in the Bible, something much better. Whether looking at how we treat foreigners and the needy, or general principles about love and charity, the difference between the Bible’s perfect instruction and policies such as this are stark. Upholding the law - if it does not clash with the Bible’s teaching - is something we are told to do. But even when it does clash, Christians are frequently guilty of ignoring the issues. Following that easier, broader path is something we are also warned against (Matthew 7:13-14).

Yesterday, the ECHR began to block the removals until the flight to Rwanda had no passengers left. As concerned campaigners and charities watched, and the plane was seen preparing on the runway, last-minute news continued to come in. Yet, the worry that onlookers felt is nothing compared with the fear and confusion the potential passengers were experiencing. No asylum seeker reaches the UK without suffering trauma, both in their home country and on the journey. To exacerbate this should offend anyone who cares about the vulnerable.

For the UK, shirking our responsibilities, avoiding generosity and failing in our duties places us in a position of such moral paucity that Christians must cry out for change.