Priti Patel’s new immigration bill is morally wrong. Any Christian who believes in ‘love your neighbour’ must stand against it

Jesus cared for the least and the lost, and we should be free to do the same. But the government’s new bill may criminalise anyone helping refugees, even if they’re drowning in our seas, says Caroline Gregory 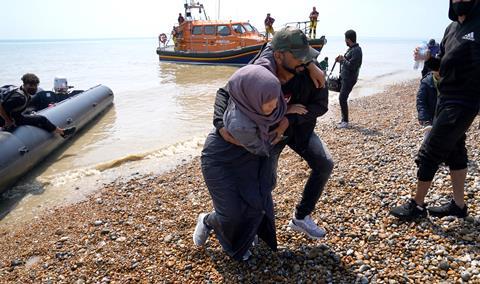 If I told you that an eight year old child was living alone in your local park, what would you do? Would you jump up to help, or do nothing because you weren’t sure how they got there or why?

2021 has seen a rise in the tiny number of people trying to cross the English Channel from France in order to claim asylum in the UK. On Tuesday, Home Secretary Priti Patel’s new immigration bill was passed in parliament.The new bill criminalises asylum seekers and, potentially, also anyone who looks after them. It allows greater force to be used and essentially closes the UK’s door to refugees altogether.

In 2015 and 2016 I worked and lived with refugees, primarily in Calais and Dunkirk, joining the large UK volunteer effort. I tried to bring churches together in the urgent need to fulfil the biblical command in Proverbs 31: “Speak up for those who cannot speak for themselves, for the rights of all who are destitute. Speak up and judge fairly; defend the rights of the poor and needy.” I took people such as Rt Rev Andy John, Bishop of Bangor, and Rev Canon Dr Giles Fraser, previously canon chancellor of St Paul’s Cathedral, to Calais to show them the situation. I’m still involved in running two refugee charities as well as contributing to the academic, media and parliamentary response to the ongoing crisis in Europe.

I can find no biblical evidence for adopting the position imposed by the new bill, but an abundance for the opposite view; from the requirement in Leviticus 24:22 to “have the same law for the foreigner and the native-born” to the command in Isaiah 58:10 to “spend yourselves in behalf of the hungry and satisfy the needs of the oppressed”.

The ongoing misinformation that seems to prevail in public and political opinion towards asylum seekers and immigration issues must be challenged by Christians, as it presents a false picture of the reality. Everyone has the right to claim asylum. For almost everyone, you cannot claim asylum in a country unless you set foot on that country’s soil. Migrants crossing the Channel are not doing so in order to sneak in; they are doing so because they have no legal way of reaching the UK and there is no way for them to apply for UK asylum unless they are here. Asylum seekers are not obliged by law to seek asylum in the first safe country they reach. The UK, despite being one of the richest countries in the world, received just 26,903 asylum applications in the year ending in March 2021, compared with 121,995 in Germany and 92,200 in France alone. Neither the EU nor the UK are disproportionately affected by the global refugee crisis; Turkey and Pakistan host more refugees than all of the EU countries combined. Per capita, the UK is at the bottom of the table of European countries ranked by how many asylum seekers they accept.

Will Jesus be glad that we are persecuting some of the world’s most vulnerable people, most from the region where he spent his earthly life?

I am not naïve or ill-informed; I have both an academic and political understanding of the situation, as well as a lived experience of being alongside asylum seekers for many months. I have got to know them and their stories intimately. The vast majority of asylum seekers that I have met in France over the last six years have experienced torture and abuse so shocking that it has left me with second-hand trauma just from hearing about it. I have seen videos and photos that will never leave me, and have often double-checked accounts with external evidence. A very small minority of asylum seekers in France are so-called ‘economic migrants’ - no different from the thousands of Brits who emigrate to Australia and Spain each year - except that the poverty they are escaping was typically at a level that threatened their existence. The UK treats asylum seekers much more severely than almost any other European country, giving them much less money to survive on, imposing greater restrictions and using detention more; contrary to popular belief, asylum seekers are not cherry-picking the UK.

For the public and politicians, these facts go unrecognised or ignored, swallowed in a media narrative of controlling our borders, a housing crisis and irrational fear. The reality is, immigration provides net benefit to the UK economy after accounting for the costs of the system. Even if it did not, the Bible calls us to much higher standards than this, to “value others above yourselves” (Philippians 2:3).

Loosing the chains of injustice

In the midst of months of tear gas in France, witnessing violence at the hands of police, break-neck drives to hospital when ambulances refused to attend, visiting the Calais cemetery where all those who have died at the border (including tiny babies) are buried, and distributing the basics of life to those living there only for the police to then remove and destroy the provisions in the night, it was much of Isaiah 58 that kept repeating in my head and kept me going. “Is not this the kind of fasting I have chosen: to loose the chains of injustice and untie the cords of the yoke, to set the oppressed free and break every yoke? Is it not to share your food with the hungry and to provide the poor wanderer with shelter?”

Will Jesus be glad that we are persecuting some of the world’s most vulnerable people, most from the region where he spent his earthly life? Asylum seekers are not criminals - and even if they were, Jesus regularly helped people who were theoretically far less ‘deserving’ than any of the thousands of asylum seekers I have met. Nowhere does the Bible say ‘love your neighbour as yourself – except for foreigners, or only if you can convert them, or only if they are Christians’.

Patel claims that this new bill is aimed at tackling people smuggling, yet the proposals offer very little that will effectively do this. Instead, it criminalises the desperate people who have no choice but to attempt to enter the UK. Instead of focusing on resettlement and sponsorship schemes, and creating safe and legal routes for asylum claims, the new bill effectively removes the ability to claim asylum in the UK at all, breaking the 1951 Refugee Convention. A small change in wording has potentially criminalised anyone trying to help: “for gain” has now been removed from the passage in the bill that states: “A person commits an offence if he knowingly and for gain facilitates the arrival or attempted arrival in, or the entry or attempted entry into, the United Kingdom of an individual”. This could potentially be applied to the RNLI rescuing drowning people in the Channel or volunteers feeding children in Dunkirk woodland. Overnight, this has already resulted in funding bodies no longer releasing money to feed those stuck in Calais. The discussions have also yet again failed to address the UK’s complicit role in the very situations refugees are escaping from, from involvement in conflicts to arms sales to supporting regimes that abuse human rights.

Mark Seymour founded The Sanctuary, an organisation offering wellbeing and integration support to refugees and asylum seekers as part of Bethel Community Church’s work in Newport, Wales. Churches are in a unique position to offer a loving welcome, support and an instant family, some of the things asylum seekers need most and the Bible directs us to supply. Mark’s project has seen many come to faith, and has also welcomed many Christians who had to flee due to their faith. He tells the stories of his new friends, such as the Christian ex-UN lawyer who was forced to flee after exposing corruption in the government of his African country; despite living an affluent life in his home country, he has spent years apart from his family and now lives in social housing in the UK. Mark describes the new bill as unworkable, possibly illegal, and points out that Priti Patel has yet to make any alternative pledge for how the UK will fulfil its moral obligation to some of the most vulnerable people in the world.

A biblical model of compassion

The UK’s stance towards asylum seekers and refugees was already cruel and unjust. The new bill takes us even further away from a compassionate biblical model of justice and caring for the vulnerable. It makes the plight of that eight year old, alone in the woods, much more dangerous, and might make it illegal to try to help that child. For Christians, this may lead to the old dilemma of when it is our duty to follow the law or to disobey the law. In the face of rules that so violently oppose central biblical tenets and instructions, I have no question that the greater law of the Bible wins, and I hope other Christians will join me in turning this conviction into action.