Nigel Farage is wrong. Immigration is not to blame for the decline of Christianity

The decline in Christianity and the rise in non-white populations in England and Wales have led some commentators to link the two together and urge Britain to close its borders, says Caroline Gregory. But the biblical command to "love the foreigner as yourself" is more pertinent than ever, she says 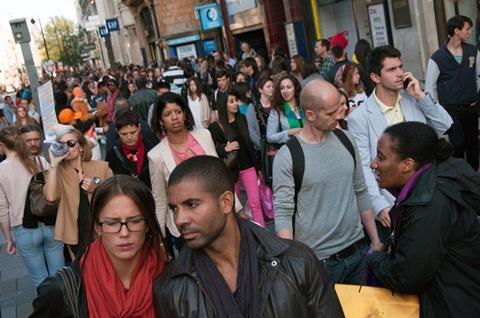 The groups of people that UK society deem acceptable is subject to continual change. Over the past century, attitudes towards groups that have included the Irish, Romanians, the LGBT+ community, travellers, immigrants, Muslims and Albanians have alternately wavered, changed, received great attention and been ignored.

The desire to ‘other’ our fellow humans leads many to claim that it is specific actions or choices that tarnish the reputations of groups of people when, in reality, it is underlying prejudices that are often the biggest problem.

Some have responded to census results with alarm and fear. Former politician and GB News presenter Nigel Farage tweeted: “According to the [Office for National Statistics] figures, London, Manchester and Birmingham are now all minority white cities” - despite the fact that this figure only takes into account those who ticked 'White British'.

In a YouTube video, he also blamed the decline in Christianity on our changing ethnic makeup, saying: “only 46 per cent [of Britons] now identify as Christian...a massive change in the identity of this country that is taking place through immigration”. Journalist Douglas Murray agreed, adding that he “never voted for this”.

But Christians must not let spin, fear or headlines distract us from our Bible-directed mission of looking after the most vulnerable. As some people receive the latest census results with alarm, I believe there is much to celebrate.

A society in which identities are claimed and defended is more similar to the sort of society Jesus and the disciples were travelling in, one in which an identity such as Sadducee, Pharisee, Roman or publican usually determined your politics, religion and philosophy, as well as typically defining your financial and hierarchical status in society.

The various standpoints we claim for ourselves these days may cross some of these boundaries more fluidly, but it is still true for many groups that their identity dictates their outcomes. Christianity has an almost unique ability to cross all such boundaries and reach out to everyone, but we do not exploit this aspect of our faith enough.

Jesus has everything to offer to everyone, and he himself modelled this for us. He deliberately hung out with those on the margins of society, those others had rejected. Instead of being alarmed at the diversification of society, let us see it as an opportunity to follow his example.

We often think of Christianity’s rules as being the ‘do nots’, but the Bible has far more to say about the things we should actually do. “The foreigner residing among you must be treated as your native-born. Love them as yourself” (Leviticus 19:34) is an instruction, not a suggestion. “Spend yourselves in behalf of the hungry and satisfy the needs of the oppressed” (Isaiah 58:10) are directions.

“Defend the rights of the poor and needy” (Proverbs 31:9) does not mean donating to a food bank during Advent, but finding ways to tackle the governmental and societal injustices that have led to genuine poverty, unaffordable energy prices, unfair immigration rules and discrimination.

Christians must not let spin, fear or headlines distract us from our Bible-directed mission of looking after the most vulnerable

This is not an add-on command for Christians who are campaigners and activists, but an instruction for every one of us - just as much as “make disciples of all nations” (Matthew 28:19).

As we move towards Christmas - the celebration of a story that includes Jesus and his family becoming asylum seekers in Egypt – we must respond to the season by following both the example and instructions of Jesus. That baby would later say: “If you love me, keep my commands” (John 14:15) and lead by example in his own life.

Our job as Christians is not just to avoid discrimination, but to actively seek out and open our doors to those of other ethnicities, religions and backgrounds, and deliberately fight against the injustices that oppress them. And the census shows us nothing that should alter that.