Dear bishops at the Lambeth Conference, please DO SOMETHING

To most people, the Lambeth Conference has looked like episcopal equivalent of a bar room brawl over LGBT issues, says Andrew Graystone. If the bishops want to change that perception, they need to act quickly, be creative, and use the power of story and symbol to present a positive case for following Jesus, he says 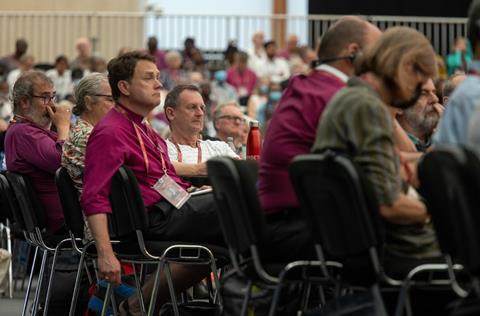 During my short career in political campaigning I was taught that general elections were fought on two separate battlegrounds: the land and the air.

The ‘land war’ was made up of local campaigners like me, knocking on doors and giving out leaflets on a wet Wednesday night in Wolverhampton. The ‘air war’ was the battle between party leaders slugging it out in TV and radio studios, and the coverage in national newspapers.

We all knew that however hard we worked locally to win votes on the ground, we would only make a limited difference. It is the big picture - the air war - that matters. The party that controlled the public narrative would win the election.

I thought of this again as I watched the coverage of the Lambeth Conference taking place in Canterbury this week. 650 Anglican bishops from around the world have been meeting to…well, to do what exactly? If you asked any individual bishop they would probably tell you that they are meeting for fellowship and prayer, to study the Bible and discern the way ahead for the church. Many of them have been posting happy pictures of meetings with bishops from far away. But that’s not the narrative that any onlooker would see.

From the outside, it looks as if 650 highly privileged old men (the men outnumber the women six to one) have been slugging it out in a giant row over same sex relationships. Ironically, this is exactly what Archbishop Justin Welby said he didn’t want to happen. It wasn’t helped by some very obvious shenanigans around voting on key issues that gave the impression that at best, the process hadn’t been thought about very carefully, and at worst, the Archbishop’s team had brought people there under false pretences. If the hope was to present a picture of a church united in Christ while divided on other issues, that hope has been comprehensively dashed.

Since the row broke out last week dozens of English bishops have been tweeting happy pictures of meetings with counterparts around the world. But it’s too late. The air war has been lost. History will record the public narrative, which is that the Lambeth Conference of 2022 was the episcopal equivalent of a bar room brawl.

If Christians are sincere about wanting the Christian message to take root in the world, they need to learn from political campaigners. The ground war matters. Most ordinary people know a Christian they like, and some have a good experience of a local church. But the air war matters more. On the whole the general public thinks that Christians are homophobic, anti-intellectual and out of touch with the real world. And before you tell me that’s not true – it doesn’t matter. If that’s what the public narrative has determined, that’s what you have to deal with.

Put simply, people will understand what the church is about when they see what it does.

I wish the bishops would sell their homes and smart cars and give the money to the poorest. That would put them on the front page of newspapers

When I was a BBC TV producer, a prominent worship leader contacted me to say that he was planning to fill a football stadium with 50,000 Christians, and would the BBC like to broadcast it. I asked what the assembled Christians were going to do. He said they were going to sing worship songs and pray. But, I protested, that’s exactly what people expect Christians to do. If you want to shape the public conversation, you need to do something different; something amazing; something really big that tells us what you are about.

Every Christian is engaged in the ground war every day, living faithfully and lovingly in families and workplaces. It’s tough, but important. What bishops and other church leaders are called to do is much bigger, and in one sense much simpler. They are required to lead the air war.

No-one out here in the real world cares about the wording of a paticular “Call” or who voted for what. Out here, it just looks like inter-church politics and everyone having an almighty argument.

And yet, we know that buried in the crowd at the Lambeth Conference are a hundred stories of lives transformed and messes redeemed, that would make the watching world say “Wow!” Those stories need to be heard.

I wish the Lambeth bishops from the hundred richest areas would sell their homes and smart cars and give the money to the poorest. That would put them on the front page of newspapers worldwide.

If they would take off their robes and go out and share food with homeless people in London or Canterbury they wouldn’t need any words. The pictures themselves would tell a powerful story of Christian love and grace.

If they would tear their robes as a sign of repentance for the church’s failings, the shock would make everyone sit up and take notice. If they would just do something other than sit in circles listening to words spoken from platforms, the public might start to believe that something really revolutionary and hopeful was on offer.

Andrew GraystoneAndrew Graystone is a writer, broadcaster and journalist who has written and presented over 1000 programmes and talks for BBC Radios 2, 4 and 5Live. He is an academic theologian specialising in theological communication and is the author of Faith, Hope and Mischief: Tiny Acts of Rebellion (Canterbury Press)