Bravo to the clever courtier who made Boris read Philippians

Boris Johnson was given self-condemnatory words from the most powerful book in the world, says George Pitcher, as he suggests some other verses for former prime ministers to examine 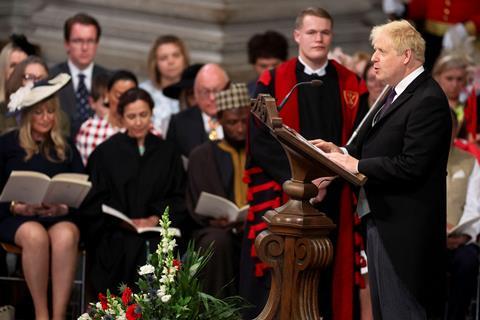 Boris Johnson reads from Philippians during the National Service of Thanksgiving at St Paul’s Cathedral, London, on day two of the Platinum Jubilee celebrations

There was much hilarity over prime minister Boris Johnson reading a passage from Philippians at the Queen’s Platinum Jubilee service last Friday: “Whatever is true, whatever is honourable, whatever is just, whatever is commendable…think about such things”.

Like US president Donald Trump holding up a Bible in Washington DC as his country rioted almost exactly two years ago, the moment marked perhaps our greatest jubilee in the long reign of political irony. There’s nothing quite like scripture for giving the political elite words that turn accusingly to ashes in their mouths – like a huge finger from a pop-up book pointing right back at them.

Why do they try to do it? Ignorance, probably. On the campaign trail, Trump frequently invoked the Bible but couldn’t name anything in it. Almost certainly, in Johnson’s case, he won’t have read the passage from St Paul’s epistle until he reached the lectern in St Paul’s cathedral – just another ministerial brief to skim-read when you get there, right?

But what is also certain is that the reading will have been carefully chosen, by a shadowy courtier and probably with the connivance of some of the cathedral’s chapter. They were, as Johnson would recognise all too well, having a laugh.

It’s quite comforting, in a way, that court and cathedral staff should conspire to expose the inadequacy of the holder of the highest political position in the UK, by giving him self-condemnatory words from the most powerful book in the world. It’s a sort of momento mori moment, when the slave whispers in the ear of the powerful that they are mortal and will die.

That’s a hugely valuable role in public life. One only wishes that they would call him out more obviously and publicly, but I shall return to that in a moment.

First, I couldn’t help wondering what Bible passages might similarly have been given to recent prime ministers, both to undermine their credibility and to bring them up short. Here are my suggestions for such public scripture readings since the premiership of Margaret Thatcher.

Irony may have been lost on the Iron Lady, but for Thatcher herself I select the incident between the sisters Mary and Martha in Bethany (Luke 10:38-42). Thatcher was forever claiming that the British economy should be run as a good housewife would do it. But when Martha complains that Mary is leaving her to do all the housework, Jesus insists that Mary should be allowed to concentrate on something far more important.

John Major famously called his Europhobic opponents in his government “bastards” - so I’d have him read in church from Hebrews (12:8): “If you are left without discipline, in which all have participated, then you are illegitimate children and not sons”. Tony Blair really did read 1 Corinthians 13 (terribly theatrically) at the funeral of Diana, Princess of Wales in 1997: “Where there are prophecies, they will cease; where there are tongues, they will be stilled; where there is knowledge, it will pass away.” Sounds like the age of spin to me.

David Cameron, famously lazy (especially in the EU referendum campaign) and once snapped by his sister-in-law asleep with his ministerial red box on a four-poster bed, gets this from Ecclesiastes (9:10): “Whatever your hand finds to do, do it with all your might, for in the realm of the dead, where you are going, there is neither working nor planning nor knowledge nor wisdom.”

And so to Theresa May. What else? When she was jumped by a highly enterprising television reporter to be asked what was the naughtiest thing she’s ever done, all she could reply was that she’d once as a child run through a farmer’s wheat field. So it has to be a reading from Luke (6:1-11), when Jesus and the disciples are told off by Pharisees for walking through a wheat field on the sabbath, which sounds just about as naughty as what May did.

All those should have been received with as much hollow laughter as Johnson innocently reading “if there is any excellence and if there is anything worthy of praise” on consecrated ground. But what of those who ascribed the reading? I have mentioned already the service they have rendered us.

Who are these advisers? It would be good if they found a prophetic voice and spoke truth to power, like the child pointing at the emperor’s new clothes. The talents of our current batch of politicians are about as invisible as that clothing – and their self-serving motives about as transparent.

When David, King of Israel, sends Uriah the Hittite to die in battle so that he can seduce his wife, Bathsheba, the prophet Nathan comes to him and tells him a parable (2 Samuel 12) of a rich man with huge flocks who steals a single lamb from a poor neighbour to feed a visiting guest. David is thrown into a righteous rage and demands justice. Nathan’s big reveal is that this is what David has done.

For Bathsheba, read an apartment redecorated at some other poor sap’s expense. For a stolen lamb, read boozy, law-breaking parties, while the poor little people had to obey the rules. These are the narratives that need to be spelt out

Where are the special advisers, the spin doctors, even the senior servants, who will perform this kind of service? Come to that, where are the Church leaders? Rather than give a prime minister something to read in church that we can smirk at, where is the senior political figure (from the 1922 Committee perhaps) who will tell our prime minister the truth, as Nathan did to his leader?

Nowhere to be seen, other than behind anonymity in a vote of confidence. Downing Street has too many quislings and cringing PR people in it these days. Number 10 needs a prophet, not another public relations executive.