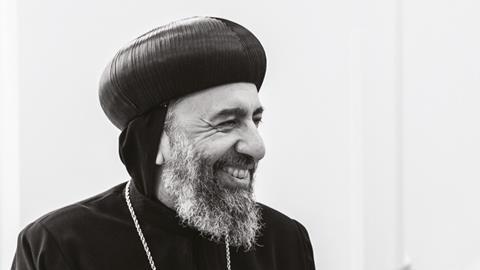 Archbishop Angaelos: ‘The world needs the Church more than ever’

The beheading of 21 Coptic Orthodox Christians in Libya by Islamic State in 2015 brought worldwide attention to a Church that has endured persecution throughout its 2,000- year history. The first Coptic (the word means ‘Egyptian’) Orthodox Archbishop of London, Archbishop Angaelos, said he forgave the killers, and in the same year was awarded an OBE for his work as an advocate for religious freedom. Today, he continues that work, as well as overseeing the 35 Coptic Orthodox parishes in the UK.

I met Archbishop Angaelos at the Cathedral of St George, part of the Coptic Orthodox Centre in Hertfordshire. The building, which was completed in 2006, contrasts many modern elements (including the large sports hall under the same roof) with an abundance of traditional Coptic icons dedicated to past saints. Hearing ancient hymns chanted in Coptic and accompanied by a lone triangle and cymbal, transports you back in time.

Tradition is close to the Coptic Orthodox Christian’s heart, and they go to great lengths to maintain it, fasting up to 210 days of the year and adopting a predominantly vegan diet in preparation for celebrating the Church’s many feast days.

Tell me about the history of the Coptic Orthodox Church.

Christianity in Egypt was established by St Mark the evangelist, the writer of the Gospel of Mark, around AD55. As he was journeying through the streets of Alexandria, his sandal strap broke and he went into a local cobbler. As the cobbler, Ananias, was fixing the sandal, he injured himself with the awl and cried out: “Oh, the one God!” St Mark, being the opportunist that evangelists are, started speaking about the one God. The cobbler received the faith and the faith spread. Since then, we’ve had an unbroken Christian presence in Egypt for the past 2,000 years.

With the entrance of Islam in the seventh Century, we saw a wave of persecution. The Christian population dropped in the beginning of the first millennium from 85 per cent to about 15 per cent. That is the approximate number at the moment. 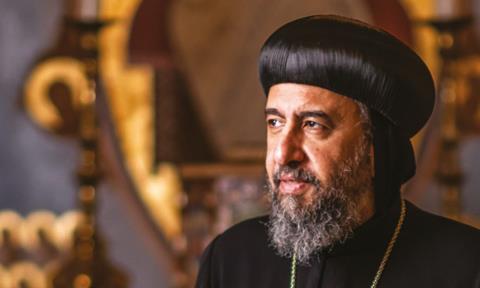 What are some of the things that set Coptic Orthodox Christians apart from other denominations?

It’s difficult to answer this question without sounding tribal! We all have such incredible gifts as the body of Christ. Three of the particular gifts we have as a Church are historic, but also contemporary. The first is our theology and doctrine. The Bible plays an incredibly important part in our day-to-day life. We have such great fathers in [people like] Athanasius, who drafted the Nicene Creed that we use across the Christian family.

The second would be our monastic movement. Monasticism started in the deserts of Egypt in the third Century with St Anthony, who is recognised as the father of monasticism around the world. Today we have thriving monastic communities in Egypt, but also religious communities across the breadth of the Church.

The third is martyrdom. Historically, the Church in Egypt has paid a significant price. We start our calendar in the year AD284, which was the beginning of the reign of Diocletian, under whom we suffered the worst wave of persecution and martyrdom in our history. And that’s in recognition of the men and women who felt so strongly about their faith that they were willing to take that step.

You’ve been described as a leading voice on global religious persecution. What do you think the Church should be doing when people of other faiths face persecution?

The only Christian response to persecution of anyone is to advocate; to be a voice calling for justice and for equity; walking in the same footsteps as the Lord Jesus Christ, the chief advocate.

As Christians, we believe we were created in the image and likeness of God. We respect that dignity given to each and every one. If you look at the Bahá’í community in Iran, the Uyghur community [in China] or even humanists… If God allows us to reject him, and he still loves us, how can we possibly judge one another? We need to draw a distinction between agreeing with what people believe and advocating for their right to do so. As a Christian, I need to continue to be faithful in the message of our Lord, not only loving people who think that I’m their enemy but being absolutely intolerant of intolerance.

You’ve seen your own community targeted. Can you talk about this, and what we can learn from the way that Coptic Orthodox Christians have responded?

Of course, we have to talk about persecution, because we live persecution. I don’t think it defines us as victims, but it defines us as people of God who are willing to walk that journey and carry that cross. In the past years we have seen, most notably, the Libyan martyrs. Those 21 men killed on the beach – in those very distinctive orange jumpsuits – became a symbol of faithfulness and graciousness to the whole world. I think somehow this suffering galvanised the world. I received so many messages of support, condolence and admiration from people of all faiths and no faith at all.

And there was one man who was killed who wasn’t a Coptic Orthodox Christian – is that right?

That’s right, Matthew was a Ghanaian who was working with the Coptic Christians. He was given the choice to leave them and renounce his faith but Matthew said: “I’ve been with them: their faith is my faith.” And he died with them. The beauty is, when the 20 were repatriated and laid to rest near their home village, there was one place left for Matthew. He had no family of his own and we were finally able to have him repatriated. He was laid beside his brothers in that church in Upper Egypt.

They weren’t evangelists, they weren’t ministers, they weren’t pastors, just very normal people from less privileged families who left their families to go and work abroad to earn money for them. And yet, they had this opportunity to witness, and they did. [The author] Martin Mosebach saw a picture of one of the martyrs and was so moved that he went to Egypt and lived among the families. He thought he’d see people who were angry and bitter and broken, but instead he saw people who were, of course, sad for the loss of loved ones, but resilient and gracious and forgiving. I feel so incredibly blessed to be Coptic Orthodox, because I’m holding on to the coattails of 15-20 million Copts who live faithfully. 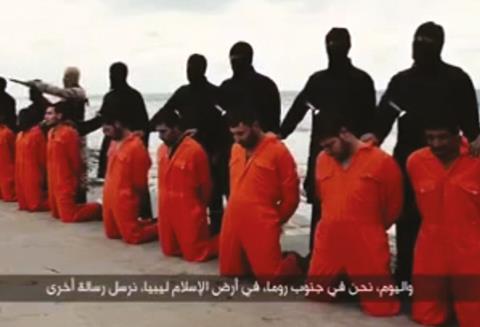 Tell me about your involvement with Thy Kingdom Come, which started in the Anglican Church but is now a global movement inviting Christians to pray for more people to come to know Jesus.

I really am in admiration of Archbishop Justin and the whole Thy Kingdom Come team, who are all very dear friends of ours, because they haven’t tried to own it exclusively but have taken people along with them. Last year, the ten days of Thy Kingdom Come ran between Ascension [Day] and Pentecost in the Western calendar, but then the same programme ran again according to the Julian calendar [used by the Orthodox Church]. It’s a powerful message that we rejoice in the same resurrection, even if we celebrate using different calendars.

Thy Kingdom Come is a wave of prayer, but it’s also about evangelism. How easy is it for Christians in Middle Eastern countries to share their faith with those around them?

Incredibly easy. But not in the way you may be alluding to. We do outreach differently. We don’t stand on a street corner and say: “Hallelujah!” You can’t do that in Egypt or Iraq or Libya. But what you do is spread the love of God through your own life, and you reflect that light, that hope and that love.

It really upsets me when, especially in some evangelical quarters, they look at the Orthodox Church as being dormant and dead and ineffective – and I know that’s not the vast majority because I have wonderful friends who understand who we are. In the West, we look at evangelism and outreach as a positive, separate act. But when you see things that we’ve been speaking about – acts of forgiveness and reconciliation, protecting and loving others, that is the greatest evangelism we can do.

What does it mean to pray for God’s kingdom to come in the context of persecution?

It means having a trust in the love of God and in his righteousness and his faithfulness; that he will never leave or abandon us; that he has created us for salvation. We think: If your kingdom is so perfect, let it come here. Let it be part of our lives because we don’t want to wait. This takes an element of humility and submission, and those are two words we don’t like. 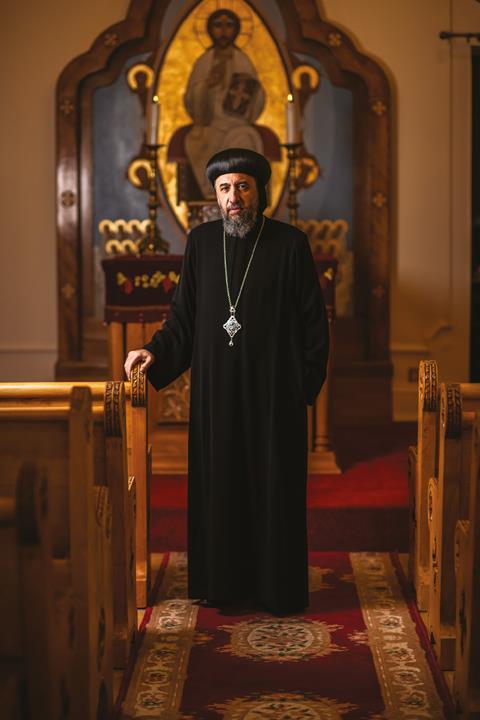 Your ministry has led you to spend time in refugee camps. Can you tell me about those visits?

I was able to visit the Zaatari camp, one of the largest in the world. I was there on the day of the birth of the 5,000th child in that camp. For those children, they knew nothing else. In refugee camps, you see the best and worst of humankind because you see what oppression and unfairness does in the lives of people. But you also see the work being done. It was incredible to see how, on the Polish and Romanian borders, people flocked to receive people coming in from Ukraine. I am far from losing hope in humanity – I think we are blessed with the image and likeness of God intrinsically; there is a goodness inside us that desires to do more.

What do you think the UK government’s approach to refugees should be?

We’re called to love and share resources, not to be selfish. And so I think it’s important for us to make available whatever facilities we can. But there’s no doubt there’s a difficult balance: you have elements of national security, but you also have a sense of compassion and responsibility. The word ‘refugee’ has become so deeply politicised, it is such a trigger word now that we forget that it is built upon refuge. You don’t seek refuge except if you are living in incredibly dire circumstances. If we are able to provide security and support, I think we have a moral obligation to do so.

And as we come into this time of prayer for Thy Kingdom Come, what would you like to say to the Church?

The Church is strong. The Church is needed. We need to completely reject any notion that the Church is now irrelevant. But we need to continue to make it accessible, dynamic and responsive. And so we pray God’s blessing upon his Church in all its diversity. We pray God’s healing upon his world, especially with so many conflicts and wars at the moment. We would have thought it inconceivable only a few years ago. We pray God’s grace upon the world that his life may continue to shine and that his kingdom comes.

To hear the full interview, listen to Premier Christian Radio at 8pm on Saturday 14 May or download ‘The Profile’ podcast: premierchristianradio.com/theprofile

Thy Kingdom Come takes place from 26 May to 5 June. For a free copy of a prayer journal written by Most Rev Justin Welby, Archbishop of Canterbury, visit thykingdomcome.global