Why the Queen was Britain’s best evangelist

Much has been made of Queen Elizabeth II’s faith, but where did her strong trust in Jesus come from? Catherine Butcher explores the religious influences in the Queen’s life – from childhood to old age – and how they contributed to her becoming our nation’s most effective evangelist

In 2016, the year of Queen Elizabeth II’s 90th birthday, The Servant Queen and the King She Serves (Bible Society) was published. In the only book to which she personally contributed a foreword, the Queen clearly identified herself as a follower of Jesus. “Billions of people now follow his [Christ’s] teaching and find in him the guiding light for their lives. I am one of them because Christ’s example helps me see the value of doing small things with great love.”

Queen Elizabeth has been described as Britain’s best evangelist. She spoke naturally and confidently about Jesus and his impact on her life, particularly in the speeches she gave after the turn of the Millennium. In the stories that have emerged since her death, we have seen glimpses of her care and compassion for the individuals she met.

She clearly sought to put faith into action publicly and privately. As she once said: “Love God and love thy neighbour as thyself – in other words, treat others as you would like them to treat you.” At the start of the new Millennium, the prime minister at the time, Tony Blair, persuaded Queen Elizabeth II to usher in the New Year singing ‘Auld lang syne’ in a packed Millennium Stadium.

Pictures showed her looking grim-faced and distinctly uncomfortable. In contrast, she chose a very different emphasis in the words she later used to describe that juncture. The royal archives describe her Christmas broadcast at the end of 2000 as her reflection on “the true start of the new Millennium”.

Acknowledging that “most of us have a sense of the spiritual,” and a recognition of “a deeper meaning and purpose in our lives”, she proceeded to give a summary of Jesus’ life: his birth at a specific point in history; his training as a carpenter; his preaching and then the culmination of his ministry.

“In his early 30s, he was arrested, tortured and crucified with two criminals. His death might have been the end of the story, but then came the resurrection and with it the foundation of the Christian faith,” she said.

And Christ’s resurrection was only the beginning. She went on to document the impact of Jesus’ life, emphasising that “the true measure of Christ’s influence is not only in the lives of the saints but also in the good works quietly done by millions of men and women day in and day out throughout the centuries”.

Good works quietly done was a theme she would return to in many broadcasts over the years, with an emphasis on ordinary people putting faith into action. As she said: “Many will have been inspired by Jesus’ simple but powerful teaching…His great emphasis was to give spirituality a practical purpose.”

It was also in this year 2000 speech that she said the much-quoted words: “For me the teachings of Christ and my own personal accountability before God provide a framework in which I try to lead my life. I, like so many of you, have drawn great comfort in difficult times from Christ’s words and example.” During King George VI’s 1939 Christmas Speech, he read out a poem that Princess Elizabeth had offered to him to encourage the nation

Many commentators have suggested that over the years the tone of the Queen’s speeches changed significantly, with her references to faith becoming stronger. Certainly, the very personal testimonies she gave increased in frequency following that Millennium broadcast, but there are many examples of her drawing on her Christian faith from an early age.

As her father prepared his 1939 Christmas broadcast to the nation, still scarred by the First World War and anticipating further horrors, a 13-year-old Princess Elizabeth offered him a poem by Minnie Louise Haskins.

The lines from that poem encouraged the nation: “Go out into the darkness and put your hand into the hand of God. That shall be to you better than light and safer than a known way.”

This was the poem the Queen quoted in her foreword to The Servant Queen and the King She Serves, and it was echoed by the Countess of Wessex as she described the death of the Duke of Edinburgh as “so gentle. It was just like somebody took him by the hand and off he went”.

Queen Elizabeth II grew up in a family that loved the Bible, not just as a coronation gift (“the most valuable thing that the world affords”) but as a reliable source of inspiration and comfort. She loved the “glorious language” of the King James Version, which she described in 2010 as “a masterpiece of English prose and the most vivid translation of the scriptures”. 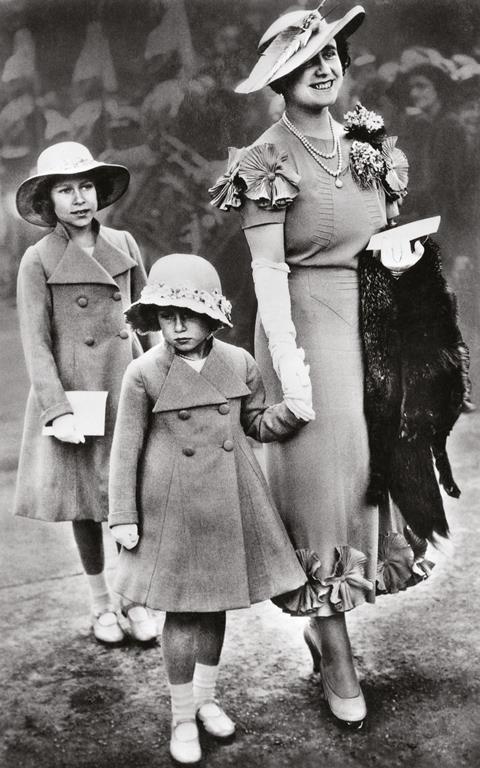 The Queen Mother read Bible stories to the young princesses, Elizabeth and Margaret, throughout their childhood

But scripture was more to her than just a book full of beautiful words. The Queen’s maternal grandmother, Lady Strathmore, spent an hour a day reading the Bible with her children, including the Queen Mother. In turn, the Queen Mother subscribed to daily devotional Bible reading notes from the publisher BRF.

I’m told staff took great delight in posting the royal copy to Clarence House! According to the Queen Mother’s official biographer, William Shawcross, she regularly read Bible stories to the young princesses, Elizabeth and Margaret, and taught them how to pray.

The princesses started their weekly school lessons with half an hour of Bible reading under the guidance of their governess, and weekly church attendance was a lifelong pattern for the Queen, who was said to keep a well-read Bible by her bedside.

She would later go on to be advised by many of the best theologians and Bible teachers in the world, such as evangelical leader John Stott, evangelist Rev Dr Billy Graham, and chaplains and bishops including the Most Rev Stephen Cottrell, Archbishop of York, who described her faith in Jesus Christ as a fountain and a well.

State events throughout her life almost always included a church service. But in normal times, the Queen attended small local parish churches joining with the rest of the congregation, in singing hymns, praying prayers and listening to sermons, which she then discussed with the preacher over Sunday lunch, demonstrating her extensive knowledge of scripture.

Elizabeth may have been born in an era when Christian observance and church attendance was the norm, but she moved with the times. Her statements and appeals for prayer may have seemed formal to some – like a courtroom addendum “so help me God” – but her clipped, received pronunciation – literally the Queen’s English – softened and so, too, did the ways in which she spoke about her faith.

As Mark Greene observed in The Queen’s Way (LICC): “Almost every time the Queen speaks about her faith she relates it directly to Jesus…He is the ‘bedrock of my faith’, an inspiration and an anchor in my life’ and the ‘compelling example’.

There is a certain originality in the language…Christ as an ‘example’ may be a well-worn concept, but the adjective ‘compelling’ suggests an intimacy of personal engagement. 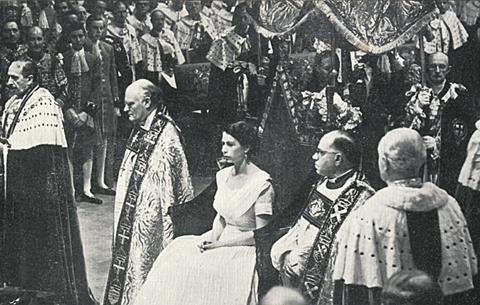 Queen Elizabeth took a keen interest in the life of the Church and the issues it faced. In 2010 she told the General Synod of the Church of England: “What matters is holding firmly to the need to communicate the gospel with joy and conviction in our society.”

Pointing to Jesus Christ as the example, and referencing Philippians 2, she added: “For at the heart of our faith stands not a preoccupation with our own welfare and comfort but the concepts of service and of sacrifice as shown in the life and teachings of the one who made himself nothing, taking the very form of a servant.”

She prepared for her coronation using the Little Book of Private Devotions, prepared for her by the Most Rev Geoffrey Fisher, then Archbishop of Canterbury. Only about a dozen copies were ever printed. These daily meditations, with Bible readings and prayers written in the first person, were created for her to use from 1 May 1953 to the day of her coronation on 2 June.

The book explained that the most sacred part of the coronation was the anointing. Hidden from view by a canopy, the Queen’s jewels and robe were removed, leaving her wearing a simple white dress. As the Devotions reminded her, she would be: “stripped of all royal dignity, to offer myself in my own person for his work”.

Symbolically, she was coming to God as an ordinary woman, like any other Christian without special status. She was asking God to send his Holy Spirit to enable her to take on her royal role.

In her Devotions she was encouraged to anticipate this significant moment: “By the anointing God makes, blesses and consecrates me Queen: and I am till my dying day ‘his anointed servant’.”

The theme of service became a recurring motif in the broadcasts she made throughout her 70-year reign. In 2012, she pointed to Jesus as the supreme example of service who “restored love and service to the centre of our lives”. She added: “It is my prayer this Christmas Day that his example and teaching will continue to bring people together to give the best of themselves in the service of others.”

She ended the broadcast quoting from the carol ‘In the bleak midwinter’, asking the question: “What can I give him, poor as I am?” And reminding us: “The carol gives the answer, ‘Yet what I can I give him – give my heart’.”

In December 2020, broadcasting from Windsor Castle where she had been isolating with Prince Philip since March that year, she told a listening world that “the teachings of Christ have served as my inner light”, before using the story of the Good Samaritan to speak to multicultural Britain in the year the Black Lives Matter movement had shaken the world. “The man who is robbed and left at the roadside is saved by someone who did not share his religion or culture.

This wonderful story of kindness is still as relevant today. Good Samaritans have emerged across society showing care and respect for all, regardless of gender, race or background, reminding us that each one of us is special and equal in the eyes of God.”

In her references to other faiths, she invited their prayers and recognised their holy books as sources of “divine inspiration and practical guidance” – sentiments that might offend some evangelical sensibilities, but were in keeping with her understanding of the role of the Church of England.

As she said in her Diamond Jubilee address to faith leaders in 2012: “The concept of our established Church is occasionally misunderstood and, I believe, commonly under-appreciated. Its role is not to defend Anglicanism to the exclusion of other religions. Instead, the Church has a duty to protect the free practice of all faiths in this country.”

In her first Christmas broadcast in 1952, she asked for prayer: “That God may give me wisdom and strength to carry out the solemn promises I shall be making, and that I may faithfully serve him and you, all the days of my life”. She kept her promise. She served faithfully. God answered her prayers and the prayers of her nations. Thank you, Ma’am.