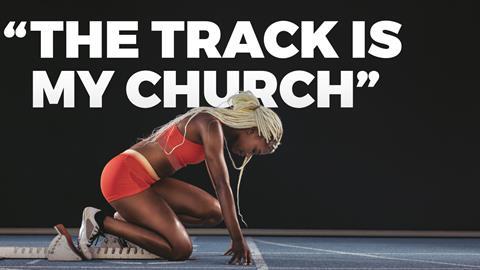 Speaking ahead of the Tokyo Olympics, some of the world’s top athletes share how sport has helped them in their Christian faith

When it comes to worshipping God, most people picture a church building. But when Jamaican sprinter Shelly-Ann Fraser-Pryce settles on her blocks in an attempt to win the Olympic 100m title in a few weeks’ time, a very different thought will be going through her head: “When I run, the first thing I say is: ‘I hope you are pleased with my worship,’ for running is my worship.”

Christians have long understood that worship is not an activity, but something that we do with our whole lives. It should not be confined to an hour on Sunday, but something we engage with constantly. Yet how often do you hear a church service referred to as ‘morning worship’? Similarly, a quaint, but not uncommon, way of asking a Christian which church they attend is: “Where do you worship?” The correct answer to this question is not Kidlington Baptist Church, but everywhere, all the time.

In his book, True Worship (Authentic), Vaughan Roberts argues that saying you are going to church to worship is about as silly as saying that you are off to bed to breathe for a while. As the notice that Ruth Graham famously hung above her kitchen sink says: “Divine service will be conducted here three times daily.”

The word ‘worship’ (including worshipper/worshipped/worshipping) occurs more than 200 times in the Bible. Many of these are what might be called statements of fact, describing someone in the act of worshipping God. While these verses confirm the importance of worship, they give us little help in understanding what worship actually is. A key verse is: “Therefore, I urge you, brothers and sisters, in view of God’s mercy, to offer your bodies as a living sacrifice, holy and pleasing to God – this is your true and proper worship.” (Romans 12:1). For the sportsperson, the idea of offering one’s body as a living sacrifice has extra meaning. It means playing as people who have given their bodies to Jesus Christ.

Worshipping God as a sportsperson does not mean singing hymns at half-time. It is a recognition that the body with which we play sport is part of God’s creation. It is common to see a Premier League footballer score a goal and drop to their knees. Usain Bolt always used to point to the sky as part of his preparation for the race. But when sportspeople make these gestures, is it superstition or an act of worship? Many athletes are deeply ritualistic about their preparations – putting the right sock on before the left, walking onto the pitch in a particular order etc. For some, there is undoubtedly an element of this, attempting to get God on their side. But we should not dismiss all such gestures as insincere.

Worshipping God, however we do it, should involve more than ritual. If it is true and sincere, it should have a formative effect upon the worshipper and so we would expect all true worship through sports participation to play out on the field. We worship God not simply by praying as we begin to play but by playing with a thankful heart, by treating teammates, opponents and the match officials with love and respect, and by abiding by the rules and the spirit of the game. Believing that our competing is worship will also include a sense that our very playing is a kind of praise, a giving of glory to God.

Christians athletes express how they worship God in different ways, but the notion of worship as ‘giving glory to God’ is close to the heart of what many elite Christian athletes believe. This typically begins with a recognition that athletic prowess is a divine gift. Shelly-Ann Fraser-Pryce says: “my talent is a gift from him”, while the American Olympic gold medal-winning shot putter Michelle Carter affirms: “God has given me this ability.” The Brazilian footballer and former FIFA World Player of the Year, Kakà, says: “my football ability is a gift from God” and Katie Taylor, Irish World Lightweight boxing champion, claims: “I believe that it is God who has given me this talent.”

People of a certain age will remember the words attributed to Eric Liddell, 1924 Olympic Gold medallist in the 400 metres, made famous in the film Chariots of Fire: “When I run I feel his pleasure and to give it up would be to hold him in contempt. To win is to honour him.” These words resonate with modern athletes too. Cat Reddick Whitehill, retired US soccer international, explains: “A soccer field is one of my favourite places to worship. Before the national anthem, I pray my performance will bring glory to God. Then the field becomes my church and playing to the best of my ability, a form of praise.”

Much has been written about the quasi-religious fervour of sports fans. Parallels can also be drawn to the discipline of worship.

We read of Jesus’ commitment to spend quality time with God: “Very early in the morning, while it was still dark, Jesus got up, left the house and went off to a solitary place, where he prayed.” (Mark 1:35). In the same way, athletes sacrifice time for training and manage their diet, proving there is a cost to worship. Nicola McDermott became the first Australian woman to clear 2 metres earlier this year. She later posted on Instagram, “The triumph of surrendering everything, has transformed my jumping to be full of joy rather than fear - it’s changed my entire life! Only God can bring that kind of freedom.”

There are times when we don’t feel like reading the Bible or going to church but we do it to express our love for God. South Africa Olympic swimmer Penny Heyns sees a parallel with her swimming: “I was in the middle of a period of my hardest training ever. I was so tired that I thought: I am going to swim up and down and praise the Lord and worship him through my talents, hoping that I could produce a half decent time so that my coach would be satisfied. Even when I did not have a desire to swim, I was obedient to what I thought he was calling me to do.”

Jarryd Wallace, disability athletics world champion, sees training as a spiritual experience: “I look at practice as a form of worship, an opportunity to spend time with the Lord. He gets me through all my workouts. When I am tired and I don’t think my body can push any more, I have nothing to do but turn to the Lord and ask for strength to help me get through that workout. And that is my favourite form of worship.”

As Christians, we believe our identity comes from being created in God’s image and redeemed through Christ. It is human nature – and arguably more so for sportspeople – to think that we need to prove our worth by our achievements. One Christian Olympian told me that his approach to the games was that winning a gold medal would be everything and nothing – ‘everything’ in that it would take his career to a new level and ‘nothing’ because he would still be the same person, win or lose. This perfectly expresses the tension between success and identity for us all.

THE GRACE TO LOSE

Losing well is crucial to genuine worship of God through sport. Felix Sanchez, 400m hurdler and two-time Olympic champion says: “You see a lot of athletes say how blessed they are when they win and you don’t hear it so much when they lose.” He adds: “Unfortunately they don’t realise that it is the same grace whether you win or lose – God just sees you the same. He’s given us this platform to compete and whether we win or lose is not important. It is important that we demonstrate our faith and make him proud with the talent he has given us and give thanks to him.”

Olympic swimmer, Kirsty Balfour, who went to the 2008 Beijing Olympics as a serious medal contender, performed poorly in the heats and did not even make the semi-finals. Speaking of her disappointment, she says: “My first thought was of people I had let down, like sponsors, my family, who had flown out to China to watch me, and my coach and my teammates. All the money and the time that had been invested in working towards Beijing was gone.”

Yet as a Christian, in the midst of the turmoil, Kirsty had a great sense of God’s presence. The lyrics of the worship song ‘How great is our God’ kept coming to her mind: “He is the name above all names and is worthy to be praised. My heart will sing: how great is our God”.

Kirsty says: “It was amazing to have that and after what I had been through, I felt I was standing on the rock of Jesus. I was able to say: ‘Yes, Jesus you are in it. You are here. This was your will.’ I had such assurance that God still loved me.” As she looks back at Beijing, the memory is still painful but she says: “Sometimes when it goes badly, God gets more glory in your reaction and in how you handle it than in winning a medal.”

Competitive sport can develop, and reveal, our true character. Sport is important but it should not be all-consuming. Our identity should always be determined by who we are in God, rather than how we are performing or what we have achieved. As anticipation builds ahead of the Tokyo Games, it is encouraging to know that there are many elite sportspeople who are seeking to honour and glorify God and who long to see the stadiums of the world become cathedrals to his glory.

The postponed 2020 Olympic and Paralympic Games are due to take place in Tokyo between 23 July and 5 September. Tokyo 2020 president Seiko Hashimoto said she is “100%” certain the Games will go ahead, despite local resistance.

Stuart WeirStuart Weir has been involved in sports ministry for more than 25 years. He is the director of Verite Sport and the co-author of In Praise of God: Sport as Worship in the Practice and Self-Understanding of Elite Athletes