Do you become a Christian by believing a list of doctrines, or is there more to it?

The biblical writers instructed us to believe in the name of Jesus. But what does that mean? Lois Tverberg explains 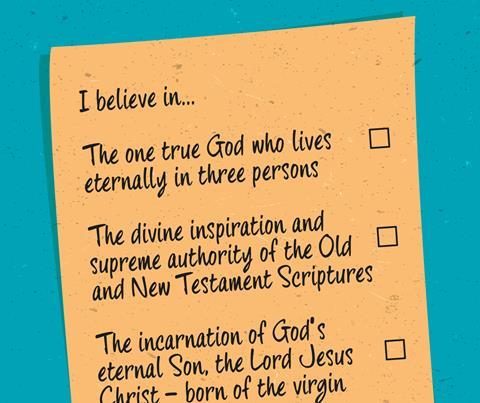 What do you need to believe in order to be saved? What if you can’t be perfectly sure of the absolute accuracy of every biblical document that has been preserved? What if your doctrinal training is a wee bit off? Or some of your beliefs about God, freewill or eschatology are unorthodox or outside of the mainstream? Are you in trouble?

These questions tie many Christians up in knots. But Jewish and Hebrew language insights can shed useful light on these worrisome issues.

Often the New Testament writers talk about “believing in Christ”, but it’s not quite what you think it means unless you’re aware of ancient Jewish ideas about who the promised Messiah would be. Of course you need to have some factual knowledge, but this is still not primarily what this phrase is about. Listen to this key line at the end of John’s Gospel: “Jesus performed many other signs in the presence of his disciples, which are not recorded in this book. But these are written that you may believe that Jesus is the Messiah, the Son of God, and that by believing you may have life in his name” (John 20:30-31).

First, note that John dismisses the idea that we need to know everything about Jesus’ life. John was aware of other deeds and sayings of Jesus, but he didn’t bother to include them in his book, because knowing every fact about Jesus was not necessary for salvation. What is critical is not that we believe a list of facts, but one single thing – that Jesus is the Messiah (or Christ).

Christ means anointed one and it alludes to the fact that ancient kings were anointed at their coronation. So, to believe that Jesus is God’s anointed is to recognise that he is the one whom God has appointed to reign over his eternal kingdom.

“Believing in Christ” is not about facts per se, but about believing in Jesus’ authority to reign over God’s kingdom. It means that you realise all of humanity is ultimately answerable to him. It also implies that you’ve put yourself under his reign.

That’s why we talk about accepting Christ or receiving the Lord when we talk about people becoming Christians. It’s because people have acknowledged Jesus’ true authority and made a decision to put themselves under it.

Look at how this makes sense of the Gospels. Matthew, Mark and Luke talk about “entering the kingdom of God” while John’s Gospel speaks of “believing in Christ”. If you understand that “believing in Christ” is about acknowledging Jesus as God’s true King, then the four Gospels fit much better together. Jesus was announcing the coming of God’s kingdom to earth, with the implication that he was the one who was bringing it. Believing in him as the Christ is to receive him (and God) as King.

BELIEVING IS NOT ABOUT LEARNING A CHECKLIST OF DOCTRINES

Another related, yet puzzling phrase is “believing in his name”. For instance, John 1:12 says: “Yet to all who did receive him, to those who believed in his name, he gave the right to become children of God.” What does John mean here?

The key is to understand that John had the Hebrew definition of the word “name” in mind, even though he was writing in Greek. In English, “name” refers to one’s verbal label, like Mary, Sue or Sam. The Hebrew word shem is much broader and also relates to a person’s identity within the wider community. If someone asks: “What is your identity?”, you might respond with your label – your name. But Hebraically, your name refers to that which you are known for – your education, your work, your accomplishments. To have a great name is to be influential and to have a bad name is to be an embarrassment to everyone who knows you.

Often the word shem does not refer to a person’s name at all, but to their reputation, status or authority. So, to “believe in the name of Christ” is, once again, about believing in Jesus’ authority as the one appointed to reign over God’s kingdom. Notice how this makes sense of Philippians 2:9-11: “Therefore God exalted him to the highest place and gave him the name that is above every name, that at the name of Jesus every knee should bow, in heaven and on earth and under the earth, and every tongue acknowledge that Jesus Christ is Lord, to the glory of God the Father.”

If Jesus is King of kings and Lord of lords (see Revelation 19:16), he has a name (status/office/authority) above every other name. Even the most powerful kings will bow their knees before his throne. Once again, the important thing is not knowing a list of facts but acknowledging that God has given Christ supreme authority over heaven and earth.

WHAT BELIEVING IN CHRIST IMPLIES

Imagine that while you’re away on holiday, there is a corporate buyout of the company where you work. New owners take over and some staff are replaced. When you walk into the office for the first time, new faces greet you. One person walks over, shakes your hand and says: “Hello, I’m your new boss.” This isn’t just a statement of fact, it describes an expectation of relationship. From now on they will be setting the vision and making the decisions, and your performance will be subject to their review. You will answer to them.

“Believing in Christ” is to realise that Jesus is your boss, the one who gets to call the shots. His words carry ultimate authority because they are the very words of God. When understood Hebraically, we can see how “believing” is not really about learning a checklist of doctrines. It goes far beyond it. To believe in Christ’s authority means to commit your allegiance to him, to eagerly study his teachings and to aim to please him in every way.