Benedict Cumberbatch’s new film The Courier is not just a Cold War thriller or an engaging personal story, says Krish Kandiah. It offers us a vision for friendship in the face of loneliness and provides a powerful metaphor of the Church’s role in our divided times 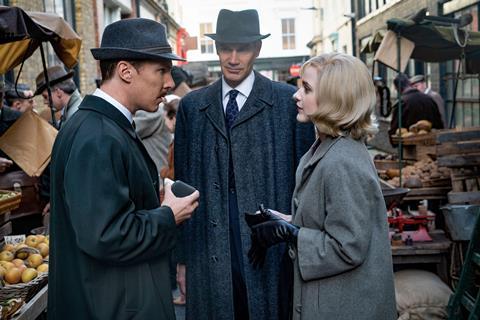 The Courier is set during the Cuban missile crisis of 1962. As US President John F. Kennedy and Russia’s Premier Nikita Khrushchev brought the world to the brink of nuclear annihilation, destruction seemed so inevitable that churches filled up with men and women praying for the survival of the human race.

Benedict Cumberbatch plays one of history’s invisible heroes, Greville Wynne, an English businessman with a troubled marriage and no experience or appetite for espionage. His performance is matched for understated prowess by Georgian actor Merab Ninidze who plays Oleg Penkovsky, a senior Soviet apparatchik who is fearful of Khruschev’s warmongering. What starts out as a simple exchange of secret documents between two countries turns into something far more powerful. The genuine friendship that forms across ideological, cultural and safety lines ends up changing the world.

So what lessons can we, as Christians, take from their example?

As the Office of National Statistics reports a secondary pandemic of loneliness, many can attest to the fact that genuine friendships are in short supply. And in our polarised times, friendships that cross any sort of divide are even rarer. In this area, Christians often have the same struggles as the wider world. Despite knowing the life-changing power of the love of God, we still need and crave authentic human relationships. We still struggle to find and be good friends to others. We still fail to be good neighbours to those others consider outsiders and whom God calls us to love. Yet despite all the barriers – our own inhibitions, assumptions and prejudices, Covid lockdowns and restrictions, and various differences in culture and language, there is something powerful about genuine friendships. Cumberbatch’s performance does a brilliant job of demonstrating how loyalty and love can motivate us to do the right thing even at the hardest time – and see incredible things happen as a result.

If you spend too much time on Twitter, you might start to believe that Jesus called us not to love our enemies but to mock, belittle and insult them. It is hard to love other Christians, let alone our neighbours, strangers or those who persecute us. But Cumberbatch reminds us that it is possible. The friendship at the centre of this film is between two men from countries that were mortal enemies. The Cuban missile crisis brought the world to the edge of nuclear Armageddon and, yet, two friends from different sides of the conflict ended up changing history. As the film’s title suggests, Wynne was essentially a courier, secreting documents between the Soviet, British and American intelligence services. But more than that was being transported. The love, respect and trust that developed between these enemies challenges those of us whose relationships with others go little deeper than with the delivery drivers who come and go from our doorsteps. Inviting people into our homes, going out of our way to look out for the needs of others, welcoming those others would shun, building connections with people from all walks of life and loving our enemies must be part of our new normal.

We seem to reserve Jesus’ title “Prince of Peace” for Christmas only. But bringing the shalom of God to the world was Jesus’ primary calling. His birth brokered peace between poor Jewish shepherds and rich Gentile wise men. His death broke down the walls that separated sinners from God. The cross did not just cancel our sin, take the penalty for our transgressions and receive the wrath of God, it paved the way to our reconciliation with God. In in the sermon on the mount, Jesus makes this profound statement: “Blessed are the peacemakers, for they will be called children of God.” (Matthew 5:9). Making peace is the family business. Our world needed peacemakers when the Cuban missile crisis threatened to end it, and our world needs peacemakers now, too, as churches, political parties, races and groups divide, fracture and polarise.

Half-way through the film, the two protagonists are having dinner in the kitchen of Wynne’s modest home. They represent different sides of a divided world, but they talk about what they have in common. The Russian general says to the English businessman “Greville, we are only two people. But this is how things change.”

The Courier is much more than fabulously-acted Cold War thriller. It is a movie with lots of challenge for us as Christians. Can we step and be the peacemakers in our families, communities and nation at this time?

May we see opportunities today to serve the lonely, build bridges of friendship and be the peacemakers that our divided world needs right now.

The Courier is out now in cinemas: thecourier.movie