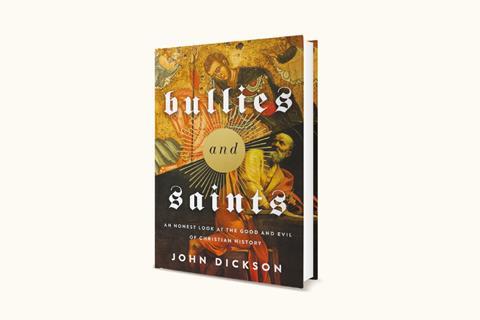 John Dickson begins his book with an account of 15 July 1099, when Christian Crusaders mercilessly slaughtered thousands of Muslims sheltering in a sacred precinct in Jerusalem.

Historic atrocities can undermine a person’s belief in the Church, and sometimes their faith in Christ too. But this author is an accomplished academic historian and a committed Christian. He believes we must be honest about the reality of the past.

Chapter by chapter, Dickson walks us through the good, the bad and the truly ugly of Church history – from oppressed minority in its first 300 years to its role at the centre of imperial power. He challenges the simplistic narratives which surround figures like Constantine, Charlemagne and Luther, showing the nuance and complexity of the Church’s relationship with wealth, politics and military power. Dickson uses a helpful musical metaphor: Jesus composed a beautiful melody that the Church has performed with very mixed results. Many bullies have mangled, corrupted and abused the tune. But many saints have also played it with inspiring integrity.

The book gives balance to some of the exaggerated claims against Christianity. In contrast to claims that the Church suppressed ‘secular’ knowledge, he shows how monasteries actually preserved the classical wisdom of Rome and Greece. While not denying their horror, he argues that the scale of the atrocities committed during the Spanish inquisition have been exaggerated, especially in comparison to how the mass murders of the secular ‘enlightened’ French Revolution are viewed.

Bullies and Saints is a brilliant book and the best form of history. It illuminates the past to help us make sense of the present. Accessible, fascinating and relevant, it is highly recommended to anyone concerned with how the Church today can play music in tune with Jesus’ beautiful melody.