Why Christians need to talk about the dark side of motherhood 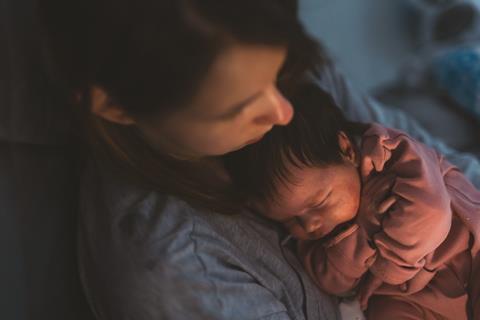 A few days ago, I was sat in a coffee shop with my four-month-old son. The coffee was getting colder and colder as I bounced my baby up and down on my knee, patted his back and tried to feed him or just distract him from crying.

It was one of those all-too-familiar mornings; I could barely keep my eyes open, having had such little sleep the night before. Then in walked two other mums with small babies.

They came over and we started sharing stories; about our labours, the return to work worries, the cost of living crisis – and how we would get through it on maternity pay. Strangers bonding through the ancient community of motherhood. “We mums have to look out for each other,” one of my new friends said, as we swapped numbers.

Her words have been ringing in my ears since. Because each encounter I have with a new mum, or those who are struggling to become pregnant, or those who have faced miscarriage and loss, I realise what a huge burden all this takes on women’s mental health.

I suffered from morning sickness throughout both of my pregnancies. My experience of this – otherwise known as hyperemesis gravidarum (HG) – was debilitating.

A survey of more than 5,000 women with HG published last year found that five per cent of sufferers had terminated a wanted pregnancy because of it, while 52 per cent had considered termination. A quarter of the women surveyed had considered suicide.

So many of my friends have faced complications trying to get pregnant, or tragedy during pregnancy. In the weeks and months following a birth, up to 15 per cent of mothers suffer from postnatal depression, which can range from symptoms such as poor appetite, anxiety, irritability and guilt, to no longer feeling that life is worth living.

My pregnancies and the weeks following the births of both my sons were, without doubt, the darkest days of my life – despite the fact that I desperately wanted to become a mum and love both of them so much that I often can’t quite believe it.

Women are told to expect the ‘baby blues’, but so much of the mental health issues around fertility, pregnancy, birth and motherhood are ignored, including inside the Church.

Despite the few examples of organisations and individuals that recognise we Christians need to talk about these things, the Church’s provision for women during some of the toughest days of their lives is woefully lacking.

The Church has been known as a place in which the perfect ideal of motherhood and womanhood (think the Proverbs 31 woman and Mary, mother of Jesus) is thrust onto women.

It sets the bar unobtainably high for how we should be – industrious, happy, beautiful, caring, perfect, #blessed. Globally, the evangelical Church is also characterised by its commitment to standing up for the rights of the unborn. But my appeal here is for those who do so to be equally determined in looking out for the wellbeing of mothers and those who want to be mothers.

It’s time the Church talked about the dark side of motherhood, and provided a judgment-free space where we can open our arms to those who are hurting. Yes, we mums need to look out for each other, but the Church needs to look out for us, too.