'It’s 6 months since my son took his life. The tsunami of grief has been brutal, but I still believe in a God of love'

Sharon Grenham-Thompson, also known as 'Glam Vicar', lost her teenage son Leo to suicide last year. Having been forced to face the unthinkable, Sharon explains how the devastating news has affected her faith 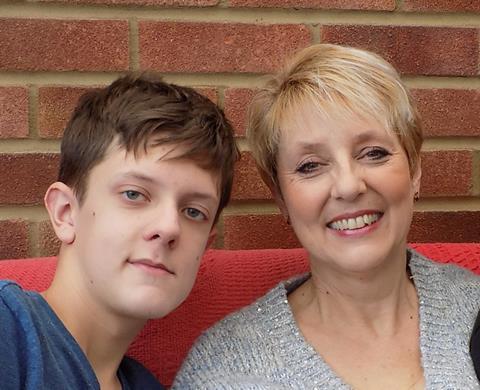 After a miserable summer, I was looking forward to this particular Friday evening. It was early September 2021. The weather was finally warming up, my eldest daughter was coming to visit for the weekend to see our new house for the first time, and my two teenagers were back at school the following Monday, with an exciting year ahead. For my youngest, Gabriel, this was his first year of sixth form; and for his older brother, Leo, it was the much-anticipated final year. A levels, university applications and Leo’s 18th birthday were on the horizon, my husband’s business had survived the pandemic and my work as a busy parish vicar was going well. I allowed myself a little smile of relief.

But despite my optimism, there’s no doubt the previous year and a half had been very challenging. Covid had caused serious disruption to GCSEs and school routines and supporting two teens was complicated. I was exhausted from the sometimes-overwhelming demands of ministry in the ‘new normal’ and had taken very little proper time off since the previous year. But top of my concerns had been Leo, who had been suffering with serious depression for well over a year. Things had got so difficult for him that he had admitted to suicidal thoughts, and even an attempt to carry out those thoughts, at the beginning of 2021. Accessing mental health support hadn’t been easy, and what we did access was patchy; but we were an open and supportive family, he had been taking anti-depressants since May, and he was receiving some counselling. Despite Leo’s troubles, and the complications added by his being on the autistic spectrum, things were looking promising.

As I pottered around the house that Friday afternoon, I thought back to a few days previously, when we had an unexpected call from the police in the middle of Monday night. They had wanted to do a ‘welfare check’ on Leo, as some of his online friends were concerned about posts he had made on social media. This was a total shock, and very scary, but Leo was safe in his room. He reassured the officers, and me, that he had simply posted some ‘dark thoughts’ but that he was OK. Nevertheless, rattled, I made sure to check the house for potential items with which he might harm himself, arranged time off work and called the mental health crisis line.

But as the week went on, Leo’s mood improved hugely and by Thursday evening he was back to normal. So much so that when he announced that he was planning on going into town by bus on Friday afternoon to buy some books for school and “maybe stay and have a coffee” I was not overly concerned. I checked with him that he felt safe, recovered and stable. As he had done with the three professionals he’d spoken to that week, he assured me he was fine. “It will do me good” he said. So I wished him a good time and about half an hour later I left the house to run errands. My husband said Leo left shortly after I did.

Now here I was, finishing the preparations for my daughter’s visit, tidying up in the garden and thinking it was 4pm and about time for a cup of tea. I guessed Leo would be back soon. Just then Gabriel put his head out of the patio door. "Can you come to the door, Mum?” he said, looking puzzled. “The police are here.”

The moment my world shattered

"How lovely," I thought, "they’ve come to follow up on Monday night. Shame Leo’s out."

Two young officers were hovering nervously at the front door. "Come in!" I smiled and stepped back.

"Er…are you Sharon?" asked the male officer, not moving.

And in that moment I knew my world had been shattered.

Leo, my beloved, complicated, brilliant son, took his life at just before 2pm on Friday 3rd September 2021. I remember very little from those first hours and days. I’m told I screamed and screamed, and eventually collapsed. Officers from British Transport Police came and went. My husband made phone calls. Poor Gabriel hovered, and I presume someone fed him. My daughter arrived. And then, some hours later, while searching for information, I stumbled across scheduled social media posts that Leo had left for his friends, to be seen post-mortem, complete with haggard selfie so he could be identified. The horror pierced my soul.

I didn’t sleep that night, nor indeed the night after. I finally succumbed, near delirious, part way through Sunday morning. It took me another four days to consume anything other than copious amounts of tea.

The horror didn’t stop. Because of his injuries I never saw Leo’s body. The police took away personal items so he could be identified by DNA. It took another two and a half weeks for him to be released by the coroner. We had to give statements to the police, tell the wider family and cope with the bureaucracy of sudden, violent death.

And yet over it all was this bewildering sense of unreality. Everywhere I turned in the house there was evidence of Leo’s life – his shoes in the hall, his favourite food in the kitchen, his schoolbag ready for the start of term. I sat in his room and his presence was so strong – surely, he’d be back any minute with a sheepish "Sorry Mum." Even his funeral, held a month after his death in my church, and attended by hundreds, didn’t break through that sense of unreality.

Of course, as the weeks, and now months, have unfolded, I’ve had to try to accept that he is not coming back. The tsunami of grief has been brutal. Although I’ve lost grandparents and beloved pets, I have never experienced the death of someone so very close. The death of a child is the one thing that people say ‘should never happen’ – although of course it does, far too frequently. Once you add in the fact that this unthinkable death was a suicide, the devastation is something akin to a bomb going off.

I’ve had to comprehend that my life, our lives, changed forever that day – a change which was unwanted, unexpected, and undeserved; a change which has rocked my whole self, my sense of purpose, of vocation, of faith.

I’ve been ordained 24 years, but I’ve run the whole gamut these past few months – God is a delusion. God is (insert expletive). God is cruel. God has abandoned me. God is punishing me. Why God? Where are you God? Please be there God, help me...

I remember one day driving in the car (a good place for yelling) and shouting at God, "It’s all right for you, you got your son back!"

If I’m honest, I’m still working through all that. But as the dust has settled I’ve come to see moments of light and love in it all.

The support I’ve had from Leo’s (mostly online) friends has been astounding – young people reaching out, often from a different continent, to offer messages of care and memory, telling me how much my son meant to them. Complete strangers on social media checking in with me regularly, with words of encouragement when the times have been darkest. A friend driving hundreds of miles to give me a hug. Family members stocking our fridge. Schoolteachers doing everything they can to support the whole family. Ministry colleagues bringing food and a listening ear, parishioners sending cards. It’s made me think of those words from 1 John 4:16 "God is love. And those who live in love live in God and God lives in them."

despite the pain, God is there

I don’t have any of the answers I want – mostly to the question 'Why?' Not from Leo, not from life, not from God. I probably never will. But I’m beginning to find a way to live with that, and to ask a different question, which is 'What now?' How do I take this terrible experience and weave it into my story in a way that acknowledges the bitter pain but defies the ever-present sense of futility? In confronting the agony, I’ve found the psalms of lament speak to me, especially Psalm 88, which ends with no answers, only questions, and yet a continued deep knowledge that despite the pain, God is there. I’m reminded that many of God’s people, over the millennia, have lived their entire lives without resolution of their questions or sorrows. Countless mothers have lost their sons. Somehow, there’s comfort in that knowledge: a community, a cloud of witnesses.

I wonder if there’s some wisdom here for our own witness in a society that’s suffered so much through the pandemic and more – not offering easy answers or promises of triumph, not strategies or even jolly gimmicks, but instead sitting with the sorrow and questions, and offering simple, practical love. In the quiet act of presence, we perhaps proclaim most powerfully that God is with us.

Sharon Grenham-ThompsonSharon was ordained in the Church of England in 1998, and currently works as a parish vicar. She's also an author, and radio broadcaster. In the past she has been a solicitor and a prison chaplain