‘A chaplain saved my life…literally’ 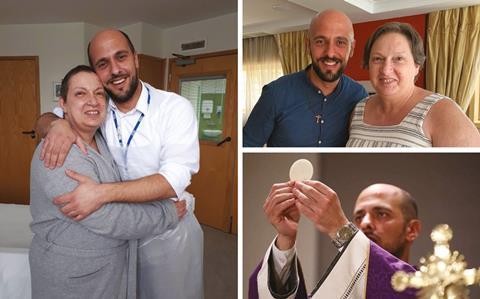 Four years ago, Agnes Vella was diagnosed with acute myeloid leukaemia. The then 57-year-old, who lives in Malta, was deeply shocked. “To be honest, I am Christian – a Catholic – but I’m not someone who’s…how do you say it? I don’t practise a lot,” she explains. “At the beginning, when you get the news, it’s a big challenge to your faith. You ask: How is this happening to me?

But Agnes is, by her own admission: “a very positive person.” “I thank God that it was me and not anyone else from my family,” says the mother-of-three. “If I saw another person in my family suffering, I don’t know if I would have coped with that.”

After four rounds of chemotherapy, Agnes’ cancer was in remission. But there was a complication. Without a bone marrow transplant, the cancer was almost certain to reoccur. After testing Agnes’ immediate family and finding no match, doctors commenced a search of the international database. Two months later, a donor was found. In England.

In March 2019, Agnes and her husband travelled to the UK where they were provided with accommodation by the Puttino Cares Foundation. On her first visit to the Royal Marsden Hospital in London, she met Mario Sant, one of the hospital chaplains. Mario, a Franciscan friar, had been in London for six years as part of a joint venture between the Maltese government and the Catholic Church to support Maltese nationals who need lifesaving medical treatment not available in their own country.

“I was afraid to be away from my family,” says Agnes. “Abroad with foreign nurses and doctors, everything was strange.” But despite her fears, Agnes could see that God was at work: “I mean, if he wasn’t, I wouldn’t have got through all this,” she says. And the support of a chaplain, especially one from her own country and who spoke her language, was a true gift from God. “He inspired me, he gave me hope.”

On the day that Agnes was due to receive her transplant at the Royal Marsden, Mario, who had registered as a stem cell donor only a few months earlier, was called to donate. The pair joked about him being Agnes’ donor, but they dismissed it as an impossibility. Her records stated her donor was English, and anyway, Mario’s call had come from another nearby hospital.

Over the four months that Agnes and her husband were in the UK, they became firm friends with the chaplain. Every week, he held Mass for all of the Maltese nationals provided with accommodation by the foundation. And when Agnes’ treatment was successfully completed, and she returned to Malta, she and Mario stayed in regular contact. He even visited her when he returned to the island on holiday.

But as Agnes’ health recovered, she continued to wonder who had gifted her this second chance at life. “I really felt that I had to show my appreciation,” she says. Two years after her treatment, she became eligible to apply to the international register to find out the identity of her stem cell donor. “When they told me the name, I was lost for words,” Agnes recalls. Mario was Agnes’ donor! Because he was living in the UK, and therefore had a UK address, the donation had been recorded as coming from an English source. “We had to go through an international database to end up back in Malta!” exclaims Agnes. “I mean, it’s amazing. Miraculous. It’s really something that you can’t explain.”

Today, Agnes is still amazed at the way in which God contrived to bring about her healing through a Maltese chaplain called to London, who first became a friend but also, unbeknown to both of them, saved her life. There are no words, she says, to describe how they felt when they found out.

NOWADAYS, I AM MORE GRATEFUL TO GOD FOR ALL THAT HAPPENS AND I AM MORE INCLINED TO ASK FOR HIS HELP

And the effect on her faith has been profound. “I survived with [God’s] help,” she says. “I could easily have given up if I didn’t believe.” Her faith has “changed drastically”, she says. “I am more aware of God’s presence, of my need for him. Nowadays, I am more grateful to God for all that happens, and I am more inclined to ask for his help. I mean, without God’s presence in your life, everything would be without any sense.”

To find out how you can register to become a stem cell donor, visit dkms.org.uk