Why ‘sorcery’ was the most searched-for Bible term in 2021

Online searches for “pharmakeia” in the Bible increased almost 200 per cent in 2021. But why? Pete Phillips, Premier’s head of digital theology, explores the possible reasons behind this year’s list of most searched-for Bible verses 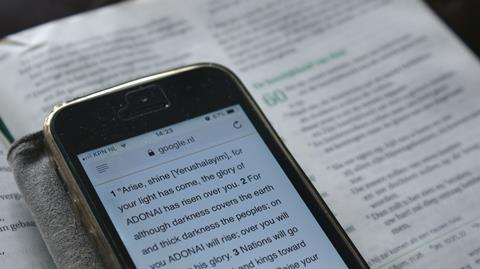 In these days of disease and unease, the online Bible searches we undertake can be markers of our response to troubled times.

In 2021, BibleGateway found that searches for a Bible verse about “a defiling disease” (Leviticus 13:45-46) were six times higher than in previous years. Another verse about “Satan falling like lightening” (Luke 10:18) was searched for after a rap star emblazoned the verse on some very expensive trainers. While verses about love still top the searches on BibleGateway, verses about plague, disease, fear and loneliness all decreased in number. We’ve all had enough bad news, perhaps.

Key increases in the search terms used were the characterisation of God as “slow to anger and abounding in love” (Psalm 103:8) and Jesus’ words of comfort from John 14.2: “in my Father’s house, there are many rooms”. There is a sense that people are turning away from the shock and horror of the pandemic to look for a God who loves them and will care for them even through the darkness of death.

We’ve seen these trends for some time: a shift away from John 3:16’s doctrinal statement about Jesus’ death bringing salvation for believers towards passages like Philippians 4 and Romans 12:2 which talk about the healing and transformative power of faith. People search for Bible verses which speak into their own situation and offer the promise of a God who can change their current circumstances for the better. Faith, healing and wholeness are all central to the list of most searched-for verses of 2021 on BibleGateway.

But there is also a shift towards a separation of Christians from the world – a kind of increased dualism between being a Christian and being a part of the world in which we live. Also increasing were searches for verses marking sacred identity, such as Deuteronomy 11:18-20, the perils of backsliding (Jeremiah 3:22) and the peaceful isolation of the believer (Zechariah 3:10).

The verse which has risen highest among the top ten verses this year is Romans 12:2: “Do not conform any longer to the pattern of this world, but be transformed by the renewing of your mind.” This is closely followed by Matthew 6:3, which reminds believers to focus on God’s kingdom and righteousness, and the warning in Ephesians 6:12 that our battles are not against flesh and blood but against rulers and authorities and powers of this dark world and in the heavenly realms. Such verses remind us of the fractured world in which we live.

One of the stand-out findings in the research is the almost 200 per cent increase in the search for “pharmakeia”. It is usually translated as “sorcery” in Galatians 5:20, and used to talk of the Pharoah’s magicians in Exodus 7:11. But it is also clearly related to the modern idea of a pharmacy as a place to buy medicines, or to the vaccines created by the pharmaceutical industry. In fact, you can almost see some people finding the Greek word here and denouncing the pharmaceutical industry as a place of sorcery and fraud. Although, sadly, love of money seems more likely to be the sin which plagues such firms.

It is true that, in ancient Greek, the word is used to describe both licensed and unlicensed medicine. But it is much more commonly used for the latter - what we once might have called old wives’ tales, ‘traditional’ herbal medicine, or even witchcraft and the harshly-punished crimes of using drugs to affect another’s behaviour or even to cause death. The kind of drugs that this passage is referring to are really the equivalent of spiking someone’s drink, the abuses of the illegal drugs trade (headed up by the misuse and abuse of cocaine, heroin, spice and amphetamines) and the exploitation of those addicted to drug use. The vice here is drugs, not medicines.

This verse in Galatians 5:20 is not Paul condemning the pharmaceutical industry for being involved in witchcraft and sorcery. Such a claim is to apply one partial, ancient meaning to a thoroughly modern industry. Like suggesting that ‘Beefeaters’ (the nickname of the Yeoman Warders at the Tower of London) only ever eat beef. And perhaps it shows some of the fracture of our contemporary world views yet again, between those who are convinced that the pharmaceutical industry is out to poison all of us, and those who see an industry which provides safe drugs which extend the lives of millions and bring healing every day.

The misinterpretation also shows how dangerous it is just to have a little bit of Greek. It is much better to sign up to my course on the Greek language at Spurgeons College, learn Greek this year and begin to see how to properly divide* the word of God!

*another term which needs closer scrutiny.