Can social media win the battle against Russia’s ‘dezinformatsiya’?

There's a battle for truth being waged, says Pete Phillips. 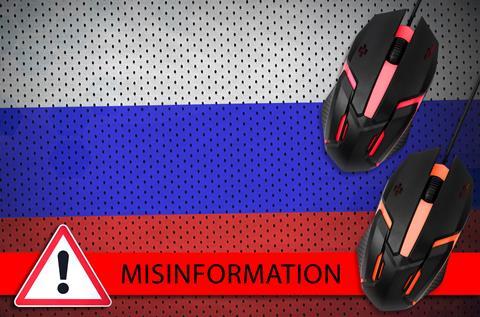 Disinformation (dezinformatsiya in Russian) is a form of psychological warfare. It’s as old as the hills. It’s about unsettling our worldview to such an extent that only what the government tell you is actually the truth.

You can see this in action on the streets of Russia. Western reports have shown authenticated video footage from Ukraine to ordinary people on the streets of Russian cities. Those clips show war rather than a “special military occupation” but the Russian interviewees reject the clips as fake news, shout at the presenter, call the police to punish him.

Similarly, a text conversation has been published between a captured Russian soldier and his mother – the soldier says he is in Ukraine and the war is terrible – his mother never knew where he was or that there was a war.

In popular psychology, you might call this “Gaslighting”, a term draw from a 1938 play in which a manipulative husband unsettles his wife by changing the amount of gas going through the lights but when she complains it is getting darker, he refutes her experience. Such disinformation unsettles the victim, makes them less sure of what is going on in the world, makes them think they are going mad. It’s a common form of bullying.

With his history in the KGB, Putin is a master of dezinformatsiya. Investigators like Carole Cadwalladr, backed up by important research at MIT in Boston, have noted for some time that Russia is engaged in this form of information war. Some have linked it to the Brexit referendum as a way of splitting up the European Union bloc, others to the emergence of Donald Trump, QAnon and Christian Nationalism in the States. The key strategy is to flood the field with a multiplicity of erroneous information in order to stop people realising the actual factual truth. So Putin talks about Ukraine never really being a state, about the current government as Nazis (even though the President and Vice-President are Jewish), and the need for demilitarization.

The doctrine of disinformation warfare calls for the 4D approach: 'Dismiss, distort, distract, dismay.' Never confess, never admit—just keep on attacking. In Russian politics, we saw this actively in play around the shooting down of the Malaysian aircraft (MH17) when many different causes for the crash were proposed by Russia, rather than acceptance of the meticulously detailed investigations by international experts.

Dezinformatsiya problematises a situation so that rather than focus on the expert truth, the public mind is both distracted and bamboozled by what John Pollock called a “wilderness of mirrors”.

In some ways, we have seen this in British politics – “no parties”, “actually work events”, “no one told me”, “ambushed by cakes”. Indeed, quite a few commentators from Ukraine (@dkaleniuk) along with the BBC's Laura Kuenssberg are asking why British-based oligarchs have not been penalised with the alacrity and precision shown by the EU. The general government response is never direct but instead is a classic model of dezinformatsiya. So, we need to see disinformation as a classic part of war.

But is there a difference between persuading your people and using disinformation to create a passive, accepting population which will allow you to do whatever you want without them manning the barricades?

Putin is good at creating elaborate re-interpretations of history. He makes careful use of terms like “special military operation” which avoid the use of more difficult terms such as “invasion” or “war”. Moreover, he is able to rely on the complete control of the media in Russia, which is consistently but also rather lazily spinning information to be pro-Russian, pro-Putin. So, the very photos which are argued by the Ukrainian side to show Russian casualties are "proved" to be from the Donbas incursion in 2014. And at the same time, some of the very same photos are shown to have been taken from the war against Isis in Syria. The reliance on old fashioned mass media points to a population already settled into accepting whatever the state throws at it.

The fog of war distorts everything.

But those who study disinformation regimes have argued that there might be a way to fight against this form of national gaslighting through a switch away from mass media and towards social media by looking at (pre-Digital commentator) Ernesto Calvino’s Six Memos for the Millennium. Calvino never quite completed his six essays on combatting disinformation culture but his six themes were: lightness, quickness, exactitude, visibility, multiplicity and consistency.

Interestingly, each of these elements could be argued to be core aspects of social media and may be the reason that the current invasion is also being called the First TikTok War. Social media offers the opportunity for commentators to respond in the moment, with accurate photos and videos which can be geolocated and time-stamped. This means that while images of destroyed tanks can be manipulated, videos of Freedom Square in Kharkiv being struck by a missile, the TV Mast in Kyiv being targeted, and the Hostomel Airport helicopter battle tend to be one-off events which cannot have been forged or spun – especially when they are geo-located and timestamped.

I think we may look back on this as the first Great Information War. Except we're already 8 years in.

The first Great Information War began in 2014. The invasion of Ukraine is the latest front. And the idea it doesn't already involve us is fiction, a lie.
1/

Each of Calvino’s themes can be seen in the rather exceptional use of social mMedia by Ukraine’s President Volodymyr Zelenskyy since the beginning of the invasion. When rumours began to be shared that he had been offered a free ride out of Ukraine by the USA, Zelenskyy began a series of posts, first in Russian, then in Ukrainian, outlining his approach to the defence of Ukraine. It’s notable that many of these video addresses have referenced recent events, included specific groups of people, shown specific buildings in the centre of Kyiv. His social media response is light and quick, but makes him also visible in specific locations (outside the House of Chimeras in the centre of Kyiv), and his tagging of key international figures alongside his 4.4 million followers ensures a multiplicity of views of what he is saying. As with the TikTok influencers this enables Zelenskyy’s message to ride over mass media and cut through to the wider population of social media viewers in Russia.

Another commentator, Daria Kaleniuk from Ukraine’s Action Centre on Corruption, has been modelling the same engagement with social media but in a more self-effacing way. Rather than send out videos, Daria has been actively chasing the idea of a No Fly Zone over Ukraine, while at the same time reporting activity around the city of Kyiv (see also John Sweeney and Oz Katerji). The key rule is rapid tweeting of events, describing where the event is happening, and what is being shown.

Daria expanded on this by managing to be present as a journalist at Boris Johnson’s press conference in Warsaw. She gave a passionate speech and challenged the prime minister over military protection and the lack of sanctions against the oligarchs. Indeed, her speech may be one the reasons for the increasing pressure the government are now experiencing about British-based oligarchs and the government’s lack of response to this issue. Again, it’s the swiftness and immediacy of the action that makes the difference – along with the added manipulation of the news cycle on mass media as well. 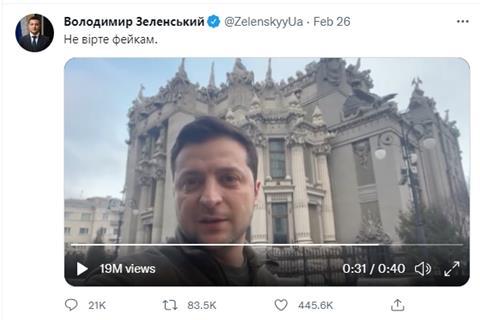 The Ukranian President has been active on social media throughout the conflict, often using his online presence to correct disinformation

Somehow, perhaps because they are digital natives, both Zelenskyy and Kaleniuk (among others) are making full use of social media in an attempt to combat the mass media and military might of a superpower. It may be that sanctions alongside action by Apple and Meta are preventing Russian social media dezinformatsiya accounts from having the same affect that they had on Brexit and on American politics.

But perhaps it’s too soon to come to a conclusion on that one.

It’s actually quite good from a Christian point of view to see social media being used prophetically within this situation and to begin to combat the mass media world of disinformation.

Whoever pursues righteousness and love finds life, prosperity and honor.

One who is wise can go up against the city of the mighty and pull down the stronghold in which they trust.

Those who guard their mouths and their tongues keep themselves from calamity.