@DigitalNun was a hands-on digital prophet and one of the best people on the internet, says Dr Pete Phillips. He pays tribute to the banker-turned-nun who loved Jesus and gadgets 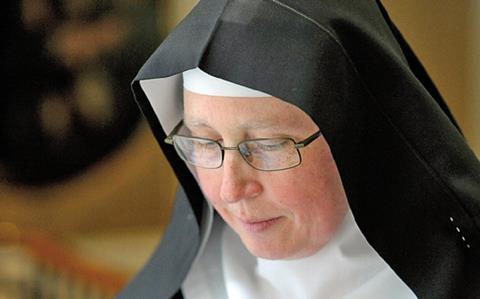 @DigitalNun was one of the best people on the interweb. Her joy, compassion and enthusiasm for all things digital set Premier Digital conferences and events alight. You can see this in the outpouring of love already happening on the internet (just search for #DigitalNun) with Archbishop Cranmer offering a splendidly gracious tribute to her: “The most fragrant and blessed Christian presence on social media has entered into paradise. Our heads are bowed; a thousand teardrops mingle with the rain, and the world is a little colder for her passing.”

Catherine Wybourne (Dame Catherine, Sister Catherine, DigitalNun), was lately prioress of the Monastery of the Holy Trinity at Howton Grove Priory in Herefordshire – the brief history of which can be read here, along with the background to each of the founding nuns. But she was also the prioress of countless Christian conferences and events, sharing her down-to-earth, thoughtful, prayerful guidance for our own engagement with digital culture. Her words were prophetic, gracious and deeply spiritual; she was a true pioneer of digital theology.

In the days before she took on the mantle of gracious prophet to the internet, Sister Catherine studied history at Cambridge and worked on PhD research in Spain, before moving into banking. She entered Stanbrook Abbey in 1981. In other words, Sister Catherine was a hands-on digital prophet – one who worked on web sites, played with coding and dabbled with gadgets. She loved all things digital. Although perhaps, at times, that left her in a complex relationship with the wider Benedictine community.

She told us that at Stanbrook, she was a Jill-of-all-trades: poultry-keeper, cook, and cellarer (bursar). She was also put in charge of Stanbrook Abbey Press, where she revived some old skills - such as printing on handmade paper - and introduced some new ones, such as electronic publishing. In between times, she saw to the refurbishment of the printing room, translated the Rule of St Benedict (she was a member of Regulae Benedicti Studia), taught herself Hebrew and made gallons of wine. She was a keen gardener, lover of the monastic dog and, for many years, contributed a weekly column to The Universe newspaper.

Her words were prophetic, gracious and deeply spiritual; she was a true pioneer of digital theology

Part of Sister Catherine’s glory was her openness to share her own life – not least living with cancer and giving thanks for the care of her doctors and the other nuns at Howton Grove. She wrote a post before Christmas saying that it was time to tidy the sock draw…a phrase which will echo through my mind in the years to come. But her Twitter posts kept on coming, even during the latest storms when the monastery lost power and Sister Catherine prayed her portable oxygen would last before power was restored (it did!).

We will miss @DigitalNun. But her footprint is here still. He presence among us persists through the impact she had on our lives. Her love shines from her eyes. Her passion for Jesus and for the Rule of St Benedict.

Go in peace, dear Sister…and continue to pray for those of us who will try to follow in your wonderful footsteps.