Why it's healthy to look at the Queen’s coffin

It’s not strange to want to see a coffin; interacting with death physically is important, explains Lord Leslie Griffiths 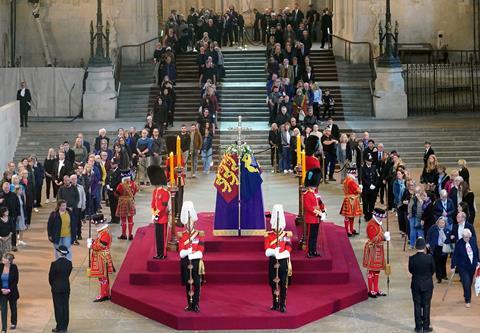 Members of the public file past the coffin of Queen Elizabeth II, lying in state on the catafalque in Westminster Hall, at the Palace of Westminster, London

When it comes to death and dying, I think we all need physical things. When I started in ministry, the coffin was always present in a funeral service. Now, the family often go off to the crematorium, and then come back and have a service. To have a funeral service without a body has always seemed to me to be the oddest of things. And so [the Queen’s coffin lying in state] meets that need. Having full sight of the body and being able to physically engage with the fact that something significant is happening, and you’re playing your part in it. I think all of that is very important theologically.

While I am certain that death is not the end, I’m strangely agnostic about the topography of heaven

Death is a reality, and we have to think about our own deaths and eventual passing away. Going to a funeral with a body is a reminder of that fact. When I was younger, it was customary not to let people go to the undertakers to be prepared for burial. Neighbours would clean and dress the body; there would be physical contact with it. I think these are healthy ways of meditating on life and death, which is a reality for all of us, instead of hiding away the bits we don’t like to see. And theologically, as Christians, we have got to face the fact that death is not the last thing anyway.

The topography of heaven

But while I am absolutely certain that death is not the end, I’m strangely agnostic about the topography of heaven. So on the whole business of whether there are angels, or Welsh male voice choirs; harps or green fields - people picture it in such a variety of ways - I’m happy to be agnostic about that. Until I go there, I won’t know.

All I know is that death is not the end. I believe that we don’t die into nothingness - but I will leave the ‘somethingness’ into which we die in the hands of Almighty God, who’s loved me this far and, I’ve got a funny feeling, is going to love me afterwards as well.

We went to Balmoral and had wonderful times with the Queen, as our patron. In the debate, I said: “The Boys Brigade have a song [’Will your anchor hold?’] and if it isn’t out of order, I’d love to sing it.” So, in the House of Lords, I sang: “We have an anchor that keeps the soul / steadfast and sure while the billows roll / fastened to the Rock which cannot move / grounded firm and deep in the Saviour’s love!”

I expected to be reprimanded, but when I’d sung it, they all applauded! I am the only peer who’s ever sung a hymn during a debate in the House of Lords - all for the Queen! It all happened so spontaneously and wonderfully.

I’ve always had a lot of faith in Charles; he has suffered in his life and he knows the reality of friendship. He’s learned through his suffering; he’s grown through it. He is ready to be king, and he’s got people around him who support him. The rest of us will do our bit, too. To think: a million young people whose careers and opportunities in life began because of The Princes Trust - a million! There isn’t one politician in all of our parliament who can claim anything near that sort of thing!

Then there’s his view on climate change and the environment. People thought he was a crank when he started; he’s been spot on. The man has said what needed to be said. And now, as he steps into the role of monarch, he knows exactly what the rules of the game are, because his mother has taught them to him.

The nation’s hopes are now firmly focused on our new king. For him, as for his mother, he’s counting a great deal on the faithfulness of Almighty God.

A prayer for King Charles III

You have brought us to this point. You are the constant factor in our lives. On your rock we stand, in you we find our hope and our belief for the future.

Help us to realise your presence now. Give grace to your servant, our new king; help and sustain him and his family through the difficult days that lie ahead, And, out of it all, help us to come, refreshed, to sing your praises and to serve you in the world, in our neighbourhoods and in our everyday lives.

In the name of Jesus Christ, we pray.