What just happened in the Northern Ireland elections and what does it mean for peace?

Last week, Sinn Féin become the first Republican party to emerge top at Stormont. But what exactly does that mean? 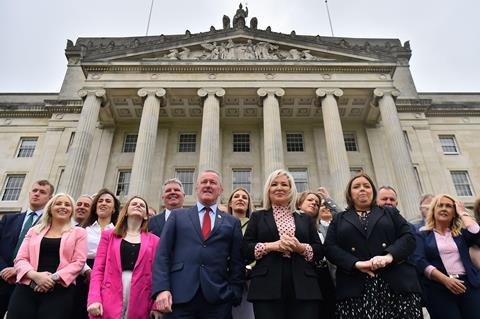 Deputy leader of Sinn Fein, Michelle O’Neill, with her newly elected MLA’s on the steps of Stormont after their historic vistory last week in Northern Ireland

My grandfather was born in 1911 in rural County Down, Ireland. At that time, the whole island was under British rule and reign. When he was ten years old a border was drawn, forming two new countries. Though the boundary between Northern Ireland and the Republic of Ireland is largely invisible, it is far from imperceptible. Today it continues to divide farms and villages, hearts and minds, business and politics – and especially elections.

Many years before this literal landmark event, and in those since, violence and uprising have shaped our geography and history, language and community. Around 400 years ago, the plantation of Ulster resulted in much of the native Irish population being displaced or replaced by English and Scottish settlers. Social, religious and political integration were not largely pursed by either side. The result is that most people in Northern Ireland today continue to live in areas which are either predominantly Catholic or predominantly Protestant. This religious identification broadly - though not exclusively - overlaps with the politics of Irish Nationalism or British Unionism. People tend to go to separate schools, read different newspapers and look to either Dublin or London for political leadership.

The trouble with ‘The Troubles’

‘The Troubles’ is the phrase we, rather euphemistically, call the period of violence between 1969 and 1998. Over 3,500 people were killed, thousands more were injured and the collective trauma has rippled out across communities and generations. Each side fighting for a promised land while their martyrs shed sacrificial blood – it’s almost biblical in nature, but we’re not out of the wilderness yet. Many seemingly intractable questions about legacy, justice, truth and accountability remain.

However, in the past 24 years since the Good Friday agreement was signed, a new narrative has slowly emerged. People from across the world come to learn about peacemaking, while foreign direct investment has transformed the cityscape of Belfast. Today, Northern Ireland is known the world over for its scenery, golf courses, and for being the filming location of hit TV series including Game of Thrones and Derry Girls. Our food and hospitality, dark humour and craic reveal something of the ‘terrible beauty’ of our people and place.

This mix of hope for the future and unresolved horror of the past, added to the unsettled future of the constitutional status of Northern Ireland, create a fascinating but volatile subtext to our bread and butter politics. It’s also why we’ve had long periods in recent years with no government sitting in our local assembly, Stormont, and could potentially face more.

It’s rare that the introduction to an article is longer than the substance, but to appreciate current events in Northern Ireland, it’s essential to understand something of the particular and peculiar sense of religious and political identities here.

So, to the most recent elections results.

The Northern Ireland assembly is a devolved institution of government within the United Kingdom. There are 90 seats and it is governed by a power-sharing agreement of mandatory coalition. This means that any government must include at least a unionist and a nationalist party. Sinn Féin retained all 27 of their seats, making them the largest party in the Northern Ireland assembly and therefore entitled to nominate the first minister. The Democratic Unionist party (DUP) lost three seats, falling to 25, and became the second biggest party, entitled to nominate the deputy first minister. While these positions are actually equal, this is the first time that a nationalist/republican party has held the position of first minister. Much was made of this in the run-up to the elections on both sides.

The Alliance party in Northern Ireland, a cross-community party which has affiliations to the Liberal Democrats more than doubled their seats to 17. This surge in votes came at the expense of other parties like the Greens who lost both their seats, the Social Democratic and Labour party and the Ulster Unionist party.

Sinn Féin’s result has led to lots of talk about a border poll (a referendum on the re-unification of Ireland). The terms of such a poll are provided for under the Good Friday agreement and depend largely on the discretion of Brandon Lewis, the Northern Ireland secretary. Much of the speculation is premature – the total number of unionist votes was still higher than the total number of nationalist votes. However, there are elections in the Republic of Ireland next year and Sinn Féin are polling to become the biggest party there also. So if, for the first time, they were the leading party in government on both sides of the border, there could be a huge push for a border poll.

On the other side of the house, the main headlines since the election have been all about the Northern Irish protocol. This is the international agreement between the UK and the EU following Brexit, which contain special provisions to allow for internal UK trade across the Irish sea and the land border with the Irish Republic/EU. For most unionists, the protocol is viewed as a border between Great Britain and Northern Ireland and therefore a threat to the union. The removal and replacement of the protocol was a key election pledge for the DUP and they have now made this a pre-condition of returning to the Stormont assembly.

While conversations about Irish re-unification and the Northern Irish protocol raise pragmatic questions about business and international politics, for many people here, these are issues which connect to their core identity and constitutional loyalty (hence the extensive introduction). All the while, we need stable government to tackle urgent and important issues like healthcare, education, infrastructure and housing. Please do pray for humility and bravery among our political leaders to do what is right and best for the most vulnerable as they navigate these contested spaces.

Finally, big questions are emerging about this changing landscape that we share and the future of this union of nations. So when you next hear about Northern Ireland in the news, listen well because for good or for bad, the politics of this curious little place have a habit of rippling out far beyond its contested borders. Even better, come pay us a visit and see for yourself, sure the craic’s great, so it is.

David SmythDavid Smyth is head of the Evangelical Alliance in Northern Ireland and coordinates the Public Leader: Northern Ireland course. He is a former solicitor and represents the EA on a range of government, civic and charitable forums. He serves in the space where faith, law, politics and culture intersect.