There's nothing wrong with Bethel anthems, says Sam Simons, but we need to be singing the songs of Belfast and Birmingham too. 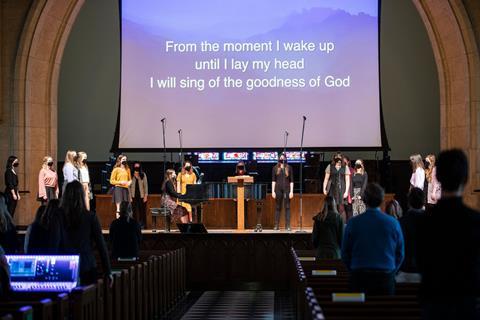 A strange thing is happening with the songs we are singing in churches here in the UK.

At some point in the last decade we just stopped singing our own songs.

If you take a look at CCLI's top 25 songs sung in UK churches, you'll see that we love singing brand new songs from the US and Australia...but there's nothing new from UK writers.

The most popular song in UK churches is '10,000 Reasons’, followed by ’In Christ Alone’ – but they are ten, and 20 years old, respectively. Why aren't there any new songs there?

If you zoom out and look at the top 100 you'll find a chunk of songs from the UK, but almost all of them are either hymns, or songs that have been around for more than 20 years.

What's happened? Have we stopped writing our own songs? Or do they exist, but UK churches are choosing not to pick up on them?

You might be wondering why it matters where our songs come from. Well, in one way it doesn’t, God is the same in every country. His attributes, his nearness, his tenderness are not dependent on your nationality. So this isn’t some sort of Brexit-inspired rant about the need to “take back control” of our worship playlists.

The wine-making world talks about “terroir” - that grapes taste different, not just because of the variety, but because of where they are grown. The weather, the altitude, the specific character of the soil all contribute to what the eventual wine will taste like. This happens in music too. Think of a band like the Arctic Monkeys – you can hear they’re from Sheffield – and when other people play their stuff, it just doesn’t sound right. It doesn’t sound authentic.

We worship a God of infinite creativity, and yet, our worship of him has ended up homogenised.

We don’t outsource creativity in other areas. We don’t think that because the runaway hit Friends exists, no other sitcom should ever be written. I don't want to imagine life without the British classics Gavin and Stacey or Only Fools and Horses!

We would never expect a pastor to use another church’s sermons week in and week out. So why are we primarily singing new songs that come from the massive worship powerhouses in the US and Australia? Maybe it’s because they’re easily accessible, or because they’re popular and we think that’s what we should be singing?

Are we worried about what people will think if we stop playing the “hits”? As we come to a Sunday as worshippers, have we become consumers? Do we have expectations of what we think worship should deliver?

We worship a God of infinite creativity, who spoke the universe into existence, and yet, our worship of him has somehow ended up homogenised. We need songs that sound like Belfast and Birmingham and Bury St Edmunds. Songs that arise out of communities’ celebration and pain. Songs that are firmly rooted in a place and a people group who are craning their heads upwards. I’m not saying that these songs aren’t being written - but we need to find them and start singing them.

What would happen if churches up and down the country started writing and singing their own songs? Songs written for specific communities, written into certain situations. We have a society fed up of insincerity and broken promises, so what could be more wonderful for a jaded heart than a simple heartfelt song written by someone that can actually be known? A song that sounds like their town. After all rainy Preston is nothing like sunny California.

I'd love it if we didn't have to rely on worship imports anymore because worship was pouring out of every community here in the UK. After such a long time of not being allowed to sing, we must not simply settle for what worked before.

Remember not the former things,

Nor consider the things of old.

Behold, I am doing a new thing;

now it springs forth, do you not perceive it?

I will make a way in the wilderness, and rivers in the desert

Sam Simons is a broadcast and print journalist for national media, and a worship pastor in a local church who is also trying to raise two small humans to love Jesus and love other people.