The week that changed the world?

After gay conversion therapy U-turns from the government, high profile debates over transgender athletes and a contentious letter signed by Lord Rowan Williams and other church leaders, Peter Lynas wonders if this was a world changing week 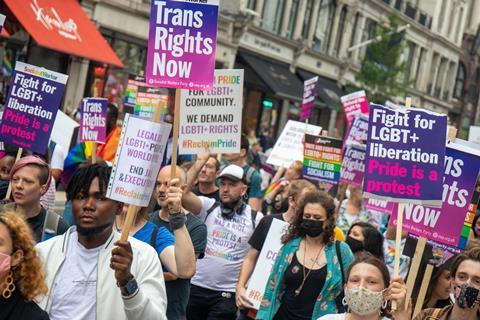 What a week of leaks, u-turns and perhaps finally some clarity on questions of sex, gender, sexuality and conversion therapy.

Late last Thursday night Paul Brand leaked plans for a government u-turn on conversion therapy. After an extended consultation the government had concluded that existing legislation needed to be better deployed along with additional non-legislative steps. In short, no new laws on conversion therapy were needed. People usually leak with a purpose in mind. This leak seemed to be an attempt to catch the government off guard and force them into a u-turn. It worked.

Within hours this position was reversed, though it is difficult to see how months of legal scrutiny could suddenly be found wanting. Stonewall doubled down and threaten to withdraw from a major government backed LGBT conference. Lots of smaller groups followed their lead leaving the government with little choice but to cancel the event.

In the meantime, the stories of the swimmer Lia Thomas and the cyclist Emily Bridges were beginning to cut through the complex policy conversations. Sport has widespread appeal - we compete, or our kids compete, or we watch sport and the get the basic question of fairness. Author JK Rowling and former Olympic swimmer Sharron Davies might be getting push back on social media, but in the real world, their views resonated. The Prime Minister’s advisers were watching.

On Wednesday, a pool clip was released of Boris Johnston chatting about a variety of issues. He bumbled along but then delivered three remarks which I suspect were well rehearsed. First, it is not reasonable to expect kids to be able to agree to irreversible treatment, they should need parental consent. Second, he is against biological males competing in female sport. Thirdly, women should have spaces dedicated to women. Twitter erupted in anger while most of the world nodded in agreement.

The Prime Minister’s comments are in line with the Cass review which has highlighted the gaps in our knowledge around gender dysphoria; sporting bodies like FINA and the UCI who are becoming more concerned about fairness; and the Equality and Human Rights Commission which released new guidance supporting single sex spaces.

So, we end the week with Westminster following Sweden, France and other countries in slowing down the process of transition for children. The pressure will now be on Scotland, Canada and America where debate has been stifled but is now finally beginning to emerge. Parents, teachers and counsellors will be able to adopt a more cautious approach - that could have been deemed conversion therapy under the abandoned proposals.

Steve Chalke, Rowan Williams and other church leaders wrote to the PM celebrating conversion in response to a loving and ever-merciful God while condemning so-called ‘conversion therapy’ involving pressure or inducement of the vulnerable or isolated. So far, so good, but then they suggested that, “To be trans is to enter a sacred journey of becoming whole.”

The LGBT movement seems to have become akin to a spiritual quest and their argument suggests the body is just a tool - something we can change at will. It undermines what it is to be human - to be made in the image of God.

The apostle Paul would disagree. So would New Testament theologian Tom Wright. There is no inner me, separate to the body I inhabit - that is a gnostic heresy. It is the very opposite to what Christianity teaches - in Jesus, God showed up in a human body. When Jesus met Thomas after his resurrection, he invited Thomas to touch his wounds - his resurrected physical body was important. To deny the body is to deny the importance of the resurrection of Jesus and the future hope of a new heavens and new earth.

In this week of rapid change, I hope those with gender dysphoria don’t get lost. I hope that churches will remain communities of welcome - and I have spoken with some this week trying to work out how to do this better. I hope there will be space for more nuanced conversations - this is more complicated than many have realised or been prepared to concede to date. I hope Christians will do a better job of wrestling with the theological questions raised and the implications of some of the things being said - bodies and biological sex matter.

Chalke and Williams are right on one point - Christians are passionate about conversion, not conversion therapy. So, this last week has not changed the world - that’s next week, the Easter week - but it has profoundly changed the conversation on sex and gender.