The Bible doesn’t condemn assisted dying. But changing the law would still be wrong

The assisted dying debate is complicated, says Chris Goswami. Christians should approach it with compassion and a healthy fear of the slippery slope that legalising it may put us on 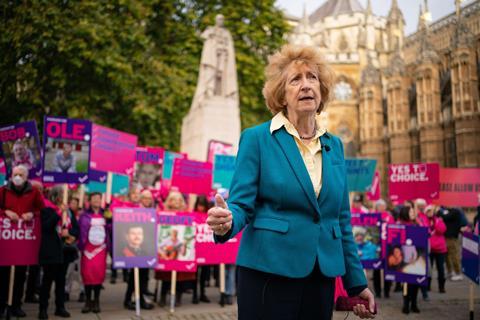 I remember reading of Jean-Dominique Bauby, editor of French fashion magazine Elle. Dominique suffered a stroke, aged 42, that left him paralysed, speechless and only able to move his left eyelid. He used this rudimentary movement to dictate his powerful and moving memoir The Diving Bell and the Butterfly (Vintage). In it, he describes an occasion where he is taken out in his wheelchair with his two children on Father’s Day:

“While I have become something of a zombie father, Theophile and Celeste are very much flesh and blood, energetic and noisy. I will never tire of seeing them…As we walk, Theophile dabs with a Kleenex at the thread of saliva escaping my closed lips. His movements are tentative, at once tender and fearful as if he were dealing with an unpredictable animal. As soon as we slow down Celeste cradles my head in her bare arms, covers my forehead with noisy kisses and says over and over ‘you’re my dad, you’re my dad’ as if in an incantation. Today is Father’s Day. Until my stroke we had felt no need to fit this made-up holiday into our emotional calendar. But this time we spend the whole of this symbolic day together, affirming that even a rough sketch, a shadow, a tiny fragment of a dad, is still a dad.”

It is heart-rending, and made me realise that the value of a human life is sometimes only fully realised by those who love us.

Even a tiny fragment of a dad is still a dad

But the heartache extends in both directions. In 2015 well-known campaigner, Bob Cole, travelled from Chester to Switzerland to end his life at the Dignitas Clinic. He suffered from aggressive lung cancer, was bent double in pain, crouching like an animal. “That’s no life,” he said, “I should be able to die with dignity in my own country, in my own bed. The law needs to change.”

Cole was followed by many others suffering terrible and incurable illnesses. But there are even more who, due to their condition, could not make the journey to Switzerland. So why can’t a person of sound mind, in terrible suffering and close to death, end their own life? After all, we wouldn’t allow an animal to suffer in this way.

That’s the position of UK parliamentarian Baroness Meacher who, on October 25th, achieved a second reading of her bill in the House of Lords. The bill, which would provide adults who are terminally ill help to die, is strongly supported by others, including Lord Field of Birkenhead, himself terminally ill. Field is now in a hospice and was too ill to attend parliament, so his words were read out by Baroness Meacher.

This summer, doctors at the British Medical Association (BMA) voted to change their position on assisted dying from “we are against” to “we are neutral”. The motion was narrowly carried by 49 per cent for, 48 per cent against.

What’s wrong with this bill?

In some cases, there may be nothing wrong with it. But, changing the law often leads to further changes. In 2002, when euthanasia was legalised in Holland, nobody imagined that, some years later, a mother suffering severe tinnitus and with two children would be legally killed. There’s always a slippery slope.

I believe it’s valid to compare this bill with the 1967 Abortion Act. Initially also brought in as a last resort for exceptional cases, today, we are all aware of the high rates of abortion, even at late stages in pregnancy. Euthanasia may start off as the exception, but it runs the high risk of becoming normalised - or even expected of people. Imagine an elderly or terminally ill person feeling under pressure to relieve their family and friends of the financial and emotional cost of caring for them?

But there is a second, simpler reason why we should not pass this bill: people change their minds. There are cases of dementia sufferers who willingly sign a directive to be euthanised but, when their situation deteriorates to a point where the directive is about to be applied, change their mind or are no longer able to confirm their wishes. Even people with all their faculties change their minds: Alison Davies wanted to die for ten years but had a change of heart even though her suffering continued.

As the above article in The Guardian says: “legalising euthanasia might resolve one ethical conundrum, but it opens a can of others – most importantly, where the limits of the practice should be drawn.” In a recent letter to The Times, experts from hospitals and universities in Oregon and Canada, where assisted dying has been legal for years, highlight a problem of unintended coercion.

3 reasons why is this a discussion for our time:

Does the Bible offer an answer?

In this case, I don’t think it does, and there are purposeful, conscientious people of faith on both sides of the debate (although most seem to oppose any change in the law).

But one thing that we must never do is oversimplify the discussion, which risks minimising people’s suffering. It’s very easy to quote clichés like “life is sacred” but this phrase, which does not occur in the Bible, can be unhelpful and simplistic. Similarly, the commandment “thou shalt not kill” was never meant for situations where a person is asking to die.

It also opens the question: “Why should such a statement only cover the length of life?” In other words: why is only the quantity of life sacred? Why isn’t quality of life also sacred?

What we do get from the Bible is the utmost need for compassion and the understanding that giving compassion will often be at our cost. All sides in this debate agree that the law should minimise suffering and maximise wellbeing. But we must choose between the rock and the hard place. Our current laws on assisted dying are imperfect but, perhaps, they are as good as they can be. Palliative care is not perfect, but it is often extremely effective at minimising physical suffering. Even though assisted dying is illegal, it is often possible through methods such as increased dosages of morphine. To date, several hundred Britons have broken UK law by helping relatives go to Switzerland for an assisted death, but none have been prosecuted.

We can live without that.

For another perspective on this story, see Heather Tomlinson’s recent feature: Euthanasia: In search of a compassionate response