Reports of the Church of England’s demise have been greatly exaggerated. Here’s where it is thriving

Church attendance may halved in the past two decades, but Sunday morning numbers only tell one story, says the Bishop of Islington. The Church is alive, growing and having an impact, he says 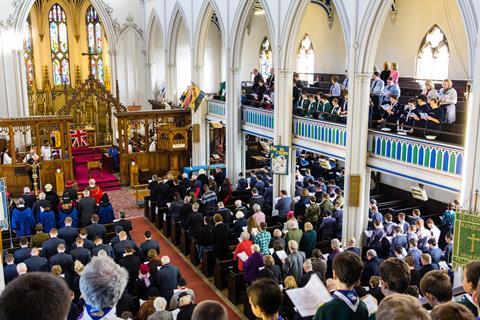 A recent report from the Church of England revealed that between 1987 and 2019, the number of people regularly attending a CofE church on a Sunday morning fell from around 1.2 million to 679,000. But over the same time period, the number of churchgoers in London actually increased slightly. Many in the press lamented the seeming decline and while I, too, am saddened that numbers in some churches are going down, I also see many positive signs that elsewhere, churches are actually growing.

Fran Carrabot is in the construction trade. He took a handful of friends from his church in Southsea, Portsmouth, and started a new church in a poorer part of the neighbourhood. In the last three years it has grown to become a viable church in its own right, and has become a place of hope and life for local people. Fran is now going to be ordained and the church he started is set to begin another church in the neighbourhood later this year.

Janie Cronin moved with her husband from London to Rochdale to start a new church. She could not get the statistic out of her mind that there is no-one under the age of 18 in any of the churches in Rochdale. The church is now up and running, in spite of lockdown, and is known in the area as ‘the red hot church’ because it meets in the premises of an old restaurant called The Red Hot Chilli. It is early days, but it is attracting young people, many of whom were not previously going to church.

Statistics cannot measure is the impact that churches have

Diane Grano heads up the Rural Resource Church in Red Lodge, part of a network of new churches in Suffolk. She is aware that there are many fine churches in the county, but there are many people who do not come to worship on a Sunday, even in the beautiful old buildings. She and her fellow leaders, none of whom are ordained, open cafés hosting a variety of ministries in strategic rural locations. Particularly in these difficult days of Covid-19, these churches, known as Lightwave, are places of comfort, hope and community for the areas they serve. They are seeing people coming to Christian faith and joining these new churches.

As well as the growth of churches such as those started by Fran, Janie and Diane, there are other notable examples of congregations increasing. Cathedrals, for instance, are showing record levels of attendance, especially at Christmas. Weekday attendance is also rising sharply, from an average of 7,000 in 2000 to 18,000 in 2017.

Research shows that smaller churches are actually growing at a faster rate than larger ones, and some parts of the country have actually seen a rise in church attendance in recent years. London, for instance, saw Sunday attendance grow by 15 per cent between 1991 and 2007, as well as the further rise seen in this latest report. Once mid-week attendance is factored in, that amounts to about 3.7 per cent of the population of London. Although this is not uniform throughout the country, a more nuanced picture than that of universal decline emerges. In some parts of the country, the opposite is true – the church is actually growing.

A new kind of church

Then, there are all kinds of new initiatives. Messy church is a movement of new congregations, founded in 2004. It is a different way of being church, aimed at families and others, based around creativity, celebration and hospitality. By 2019, there were 2,800 messy churches registered in England. So-called ‘fresh expressions’ of church are also having a substantial impact. Jonny Baker, a leader in the fresh expressions movement and director at the Church Mission Society, estimates that, on average, one new community of Christian disciples is being started each week around the country.

When the Church of England commissioned a study into church growth, one focus was fresh expressions of church in ten dioceses across the country. Put together, the number of people now attending these new churches equalled a whole new Anglican diocese. Church plants are also more and more common. Research in 2013 showed that in London, one in seven churches started a new church between 1992 and 2013 - and that trend is accelerating. ‘Resource churches’ are becoming a staple of nearly every Anglican Diocese in England. In 2012, there were just a handful of such churches. In 2020, there were over a hundred. By 2030, there may be 300. These large churches, that have the aim of starting or revitalising many other churches in their area, are often attended by several hundred worshippers, many of them young people, who the Church of England has not been successful at involving in church life of late. And then there are estate churches, set up on some of England’s poorest housing estates; new ventures to reach, serve and work with some of the most deprived people in the nation. So, although there is undoubtedly decline in the church, there are also striking instances of the opposite – new churches starting, existing churches growing, churches having an impact in areas where help is most needed.

It must be acknowledged that Covid-19 has had a profound impact on all churches, and made life, let alone growth, challenging for most. The fact that some have grown at all during such a time is all the more remarkable. It is also worth noting that patterns of church attendance are changing. An increasing number of people go to churches or church groups mid-week and not on Sundays, when there are all kinds of competing demands on people’s time. And even Sunday attendance is different. It is less regular, say once a month, rather than every Sunday. So, the numbers ‘attending church’ are likely much higher than the bare statistics might indicate.

And statistics cannot measure the impact that churches have. St Dionis church in Parsons Green, London, partnered with their local NHS trust to pack and deliver PPE at the height of the pandemic. They contribute to a foodbank, help people in debt, work with families and children who are struggling and provide support and care for those with mental health issues. In Pimlico, in central London, a new mission initiative called Heaven’s Gate meets on the Churchill Gardens estate to reach out to local people and youth. In Brixton, St John the Evangelist church works closely with their local council and other churches and charities to reduce knife crime in the area.

The Love Your Neighbour initiative, a national network of churches and charities, serve an estimated 1 million meals a month, support 16,500 people with debt advice and, last Christmas, delivered three quarters of a million Christmas boxes. The list of such programmes, showing love, kindness and practical support, could be replicated in nearly every church in the country. Numbers cannot really capture such a force in the life of our nation.

So, even though there is decline in church attendance, the picture is far more nuanced than the headlines might suggest. What is striking is that churches of all kinds are growing - the more traditional churches and the new kinds of churches. This is the mixed ecology of church in action. There remain huge challenges in these times to communicate the message of the love of God in Jesus Christ more effectively. But there are also many signs, some of them dramatic, that the church is alive, growing and having an impact. Reports of its demise have been greatly exaggerated.

Ric ThorpeThe Rt Revd Dr Ric Thorpe was appointed as Bishop of Islington in 2015 to oversee the Diocese of London’s church planting and church growth work. He also serves the Church of England nationally, supporting bishops, dioceses, church planters and pioneers, to develop church planting strategies and to plant new worshipping communities to reach new people in new places in new ways. He is the director of the Gregory Centre for Church Multiplication which offers church growth and church planting training and support for the full breadth of the church.