The Christian belief in the sanctity of human life has triumphed this week, says Alistair Thompson, as he explains why the House of Lords has again rejected calls to legalise euthanasia 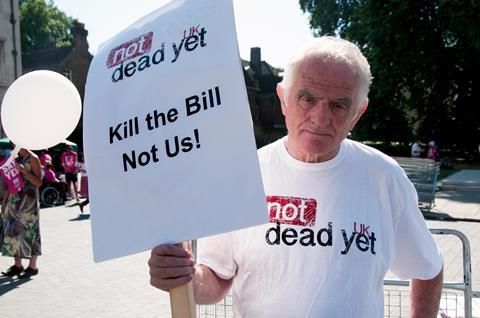 Last night the House of Lords again rejected attempts to legalise assisted suicide by 179 votes to 145. I say ‘again’ as this was the 12th attempt by campaigners since 1997 to get Parliamentarians to pass a law that would dramatically alter British law, the medical profession and society more widely.

Every time peers, MPs and MSPs have considered and rejected legalisation on euthanasia and assisted suicide (EAS) out of concern for public safety. During the discussions, those who opposed changing the law to allow EAS were accused of being somehow anti-democratic and trying to shut down debate, but this could not be further from the truth.

Some pro-EAS campaigners try to minimise anybody who believes in the sanctity of human life, that we are made in the image of God and that killing another human is bad. But being a Christian should never be used to dismiss our opposition, nor can it alter the very worrying trends we see from the handful of jurisdictions that have decided to go down this path.

In the US state of Oregon, which has an assisted suicide system similar to the one being suggested by Baroness Meacher, six in ten (or 59 per cent) of those ending their lives in 2019 cited the fear of being a burden on their families, friends and caregivers as a reason for seeking death. A further 7 per cent cited financial worries.

Powerful testimony from Dr Joel Zivot, associate professor of anaesthesiology and surgery at the Emory School of Medicine in Atlanta, Georgia, casts doubt on the myth that patients opting for the lethal cocktail of drugs die a quick and painless death. Evidence from Tennessee - which uses the same drugs to kill people on death row as the ones used in Oregon - suggest that inmates die from drowning in their own secretions, or what doctors call a pulmonary oedema. Professor Zivot goes on to explain why, in US executions, even though the person is sedated first, the authorities must also strap down both the person’s hands, and even their fingers, to stop them moving.

But it’s not just in Oregon where we see problems. In Canada, 1,400 people who were euthanised in 2020 cited loneliness as a reason. At the same time, limits on who could be killed - the so-called safeguards - have been eroded or scrapped. The Canadian government has even talked about the millions of dollars that euthanasia has saved regional health budgets. In Belgium and the Netherlands, a system designed for terminally-ill, mentally competent adults has been extended to include children, disabled people, those with mental health problems and even those who have not given consent.

In the most recent development, worrying data from the US and Europe shows that far from reducing the number of suicides, legalising euthanasia and assisted suicide seems to be associated with an increase in the number of people taking their own lives. To put this in context, a major study concluded that legalising assisted suicide in Oregon was associated with an increase of 6 per cent in the rate of suicide in the state, once all other factors had been accounted for. Among over 65-year-olds, the figure was more than double that.

Being a Christian should never be used to dismiss our opposition

This phenomenon can be seen in Europe as well. Professor David Albert Jones, from the Anscombe Bioethics Centre, has recently published a major peer-reviewed study that concluded that the legalisation of EAS is followed by considerable increases in suicide (inclusive of assisted suicide and euthanasia) and in some countries, there is a relative and/or absolute increase in non-assisted suicide too. Data from both Europe and the US indicates that women are most at risk of avoidable premature death by EAS.

Why EAS has this effect is still unclear. Perhaps it normalises the idea and practice of suicide, or perhaps it sends out a message that some lives are just worth less than others. Either way, it should represent another nail in the coffin of what is a very dangerous policy. And its why many peers argued last night that what we really need in the UK is better care for the terminally ill, disabled people and the vulnerable, not killing.

Alistair ThompsonAlistair is the director of Team Britannia PR. A former journalist, he is a communications and public affairs expert, and member of Care not Killing, a UK-based alliance of individuals and organisations oppose euthanasia and assisted suicide and promote palliative care.