Misogyny is still a massive issue in parliament. Here’s how Christians can pray for change

A Mail on Sunday article which claimed Angela Rayner was distracting Boris Johnson by crossing and uncrossing her legs has been roundly condemned. The MP described the accusation as “misogynistic”, “sexist” and “steeped in classism”. Jenny Symmons from Christians on the Left says such instances are far from isolated 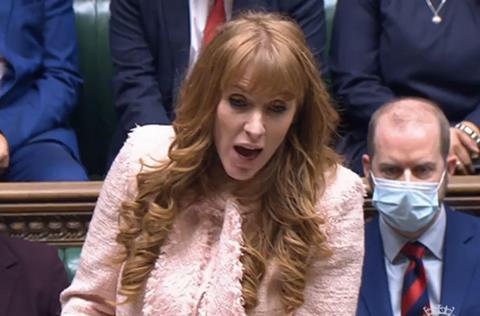 It would be great if The Mail on Sunday published an apology saying: “This was far beneath what we should be reporting in 2022.”

The people who often end up being MPs come from certain backgrounds, where misogyny can be rampant. There’s also an issue with racism and classism - and various other forms of prejudice. It seems to be a place where there is a lot of elitism and a disregard for people of other kinds of backgrounds.

Outdated and out of touch

Women have been MPs for over 100 years, and the fact that we are still the targets of salacious attacks from tabloids is pathetic.

It’s laughable to think that this story could have ever been written about a man. You could never imagine there being a piece in The Mail on Sunday about Tom Watson crossing and opening his legs when he was deputy leader of the Labour Party. Angela has been a target of so many different attacks from the press and political opponents, to do with her class, her background, her education, her family. She’s an extremely talented, fierce, brave politician who is very gifted and popular with Labour members. They can’t take her down based on her policies or her political abilities, so they try and go for her status as a woman, as a working class mum and grandma.

The story was roundly condemned by MPs across the political spectrum, including the Prime Minister, so it doesn’t meet anyone’s standards. I don’t really know what The Mail on Sunday were thinking. I hope that it will be investigated by the Independent Press Standards Organisation, but we’ll have to just see what happens. It would be great if The Mail on Sunday were to publish an apology and say: “This was far beneath what we should be reporting in 2022.”

Knowing journalists as I do, I doubt that they would ever name the person who provided the comments. But I hope that they feel thoroughly ashamed of themselves and very embarrassed, because they’ve been called out by their colleagues. They have been publicly shamed across Twitter and in the news. I hope that it would put people off, who do harbour those sorts of views, from at least expressing them. Unfortunately, we still have so many politicians who have these really outdated, grotesque views that seem to fester in Westminster. The least that could happen is for journalists to stop reporting it. Or the story could have been turned around. It should have been about the sexist views and comments of these MPs. Maybe that’s what journalists can focus on in the future.

It’s so important for Christians to be praying, particularly for young staff who are quite vulnerable in Parliament. There’s a lot of prayer needed there, as well as prayer for politicians - that they can handle the stress that they’re under without lashing out at people around them, without being unduly stressed or indeed, turning to alcohol or drugs or carrying out sexual harassment or other forms of attack. If people feel inclined to be misogynistic and abusive, they need to seek help, to recognise that in themselves, to feel convicted. I pray that people who are harbouring those sorts of damaging views and desires would try to work on themselves, to understand that they are in a position of honour and need to show integrity.

That’s something that we’re always praying in my church: for MPs to have integrity, honesty, compassion and respect for the position that they’re in. Pray for the chaplains in Parliament who are trying to help people who have experienced abuse. Pray for them and their ministry, and pray for people like Louise Davies, the leader of Christians on the Left, as well as the leaders of the Conservative Christian Fellowship and the Liberal Democrat Christian Forum; pray for those people who are trying to guide politicians - particularly Christian politicians - to be the best possible representatives of Jesus in parliament.

Jenny SymmonsJenny Symmons is a senior parliamentary researcher for Sarah Owen MP. She is head of the GMB trade union committee branch in Westminster and a member of Christians on the Left.