Matt Hancock has apologised for breaking Covid rules, but not for cheating on his wife. Should Christians care?

Sex scandals rarely end a political career these days, says James Mildred. But how concerned with the morality of our political leaders should Christians be? 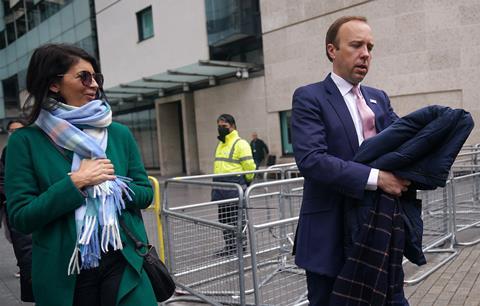 Today it emerged that Health Secretary Matt Hancock had an affair with his aide, Gina Coladangelo – someone he used taxpayer’s money to bring on board as an advisor. He is now facing calls to resign. He should, in my view, to show that there is not one rule for ministers and another for everyone else. In addition, relieving him of his duties would give him time to do the right thing and reconcile himself to his heartbroken wife and family.

There is, quite understandably, opprobrium about the news in wider society. Here is the man who, for the past 18 months, has told us all to distance ourselves from one another, splashed across newspaper pages and TV screens in a close embrace with a person not in his household, at the height of lockdown restrictions. It’s total hypocrisy. Worse than the hypocrisy, though, is the way Hancock has treated his own family. Your heart goes out to his wife of 15 years. How hurtful and humiliating for her and his three children. In these kinds of situations, it’s not unusual for the children to be the ones who suffer the most.

A question of expectations

For most political pundits and commentators, Hancock’s real crime is the breaking of Covid rules, not the fact he’s committed adultery. Given society’s general attitude towards commitment and sexuality, that’s hardly a surprise. So, as the Church, should we really care? Many will be wondering what to make of the developments today. Stories like this raise huge questions for Christians. Firstly, is it right to expect a Christian standard of behaviour from someone who is not a believer? And secondly, how much should we be concerned with the personal morality of those in authority over us?

On the question of expectations, it is right to say there’s no point expecting Christian morality from someone who has not been born again. It is only the supernatural power of the Holy Spirit that enables human beings to live for Jesus and follow in his ways. At the same time though, sin is still sin. It is still objectively wrong for anyone to commit adultery. Our response should be to be honest about the wrong that’s been done. John the Baptist didn’t simply ignore the fact Herod was sleeping with his brother’s wife but called him out on it (Mark 6:17-20). Whoever you are, God’s word is crystal clear: adultery is wrong. It’s prohibited by God’s law, given to Moses in Exodus 20, which we will all be judged under one day and condemned by if we are not in Christ. We have a responsibility to proclaim truth, and point others to God’s standards for human life.

To answer the second question, I do believe we should be concerned with the morality of our political leaders. There are worthy principles for morality in public life that have long been expected in the UK, due to the Judaeo-Christian worldview that our political institutions rose out of. In more modern times, there are seven in particular that are still recognised, known as the Nolan principles: Selflessness, Integrity, Objectivity, Accountability, Openness, Honesty, and Leadership. Surely it’s right to hold Hancock to these standards and insist that if he falls short, he should be disciplined? Sex scandals are not career-ending these days, as they often used to be. However, they should be, even by modern, secular standards. As a friend of mine said: “If Hancock cannot even honour his nearest and dearest, how can he be expected to honour his constituents?”

Often we throw stones without submitting, or submit without scrutinising

Of course, the caveat to all of this is that we are commanded to honour and obey our political leaders, despite their personal failings and sinfulness. The apostle Paul tells us to submit to governing authorities in Romans 13. He wrote that when Nero was emperor –  a serial adulterer and a murderer of Christians! If New Testament believers were expected to respect and defer to a man like Nero, how much more should we be respectful to our leaders in a democratic context which affords us much greater freedom to live out our faith without fear of persecution. Too often the Christian response is to throw stones without submitting, or submit without scrutinising. God’s word challenges us to find the right balance in both.

In conclusion, let’s pray for God’s mercy on Matt Hancock, Gina Coladangelo, and their respective spouses and children, remembering that, but for the grace of God, we ourselves might be susceptible to the same kind of sin. Let’s pray for the upholding of Christian morality in public life, which might be seen as puritanical in the eyes of some, but is God’s wisdom for all his image bearers. And let’s pray for the movement of God’s Spirit in the UK, the saving of souls, and the conformity of sinners to the beautiful image of the Lord Jesus Christ. Praise God that Jesus, who is the great servant-King, will never let us down.