If you're upset by Partygate, it's Christian outrage you're feeling

The most extraordinary thing about the hypocrisy of Boris Johnson is the fact we find it extraordinary, says Glen Scrivener. Historically, hypocritical leaders are not shocking, they are business as usual. But the Jesus revolution changed all that 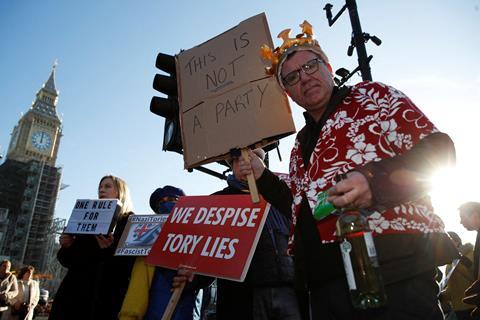 The trickle of allegations has turned into a flood. Just keeping up with all the reports of lockdown-flouting parties is now requiring an Excel spreadsheet and the regular application of palms to faces. At Prime Minister’s Questions on Wednesday, (even before the latest allegations broke), Sir Keir Starmer asked Boris Johnson when he would “do the decent thing and resign.” The “hear hears” were hearty, and they have echoed far beyond Westminster. Two-thirds of voters think Boris Johnson should step down. Virtually everyone thinks Johnson has done something wrong — even Johnson himself, who is regularly the last person to attain such insight. But what is the nature of his wrong? For most it goes beyond the rule-breaking: it’s the hypocrisy. It’s the ‘one rule for us, another rule for them.’

Whatever else divides us in society (and nowadays almost everything seems to), here is a point of rare agreement: We find it intolerable when rulers do not abide by the rules they hand down. This was the heart of our outrage at Dominic Cummings and his trip to Barnard Castle or Matt Hancock and his kiss. The adultery largely got a free pass with the public — even with the Bishop of Manchester — what was unconscionable was the Health Minister flouting his own rules. In an added layer of irony, Hancock, mid-adultery, found time to go on television to express dismay at Professor Neil Ferguson’s lockdown-breaking tryst. And so we were treated to the hyper-hypocrisy of one adulterous rule-breaker urging a police investigation into another. It seems like modern politics is not short of standards after all, it’s just they all seem to be double standards.

But allow me to ask a near unconscionable question: What’s the big deal? Seriously. Why worry about rulers breaking their own rules? Isn’t that what the powerful do? It’s certainly what the powerful have done historically. The Hammurabi Code, a nearly 4000 year old Babylonian text, preserves the basic wisdom of old: when it comes to justice, who you are is even more important than what you’ve done. Crimes and punishments all depend on the status of the perpetrator and the status of the victim. Such a caste system is found wherever you turn — whether to the Greeks, the Persians or the Romans. It’s almost a human universal. ‘One rule for us, another rule for them’ was not lamented in classical antiquity, it was both assumed and strictly enforced. Justice demanded it. As the political philosopher, Larry Siedentop, has said: “At the core of ancient thinking [was] the assumption of natural inequality.” Ask an ancient ruler whether it was one rule for them and another for the people and they would blink in incomprehension: what else does it mean to rule?

Historically, hypocritical leaders are not shocking — they are business as usual

When you stop to place our moral assumptions in historical context you realise that our outlook would sound as alien to the ancients as theirs sounds to us. Our intuitions, our values, our outrages—they are simply not the way societies have operated around the world and down through history. We believe that each individual has an equal dignity before the law no matter their age, race, sex or social standing. We believe that such laws exist above our rulers and are grounded in intangible yet inviolable things called rights. We believe that might can never make right, that a society should be judged by the way it treats its weakest members, and that rulers should serve. In moral terms, this is the air we breathe, invisible to us but essential to our lives.

Yet while these beliefs feel ubiquitous, instinctive and essential, they have not been essential to other societies—they’ve rarely been countenanced. What we take to be obvious, natural and universal—like the evil of hypocrisy—is nothing of the sort. It is the inheritance of the Jesus revolution. Christianity, in the words of historian Tom Holland, is: “the most disruptive, the most influential and the most enduring revolution in history”, and whether we consider ourselves Christian today or not, we are very much children of that revolution.

I’d urge you to press into those moral intuitions: that is your Christianity talking

It began on page one of the Bible with all humanity declared to be in God’s image (not just the king—everyone). It continues through the Old Testament with rulers commanded to reign under the law and in covenant with God and their people. It culminates in the coming of Christ, the King. He appears as “slave of all… not to be served, but to serve, and to give his life as a ransom for many.” (Mark 10:45) In the movement he births, the Lord is lowly, the Mighty One is meek, the Sovereign is a servant. Truthfully, that is the most astonishing moral disturbance, yet it’s one we rarely stop to consider.

Historically, hypocritical leaders are not shocking — they are business as usual. The idea that we would expect anything different is the shock. The most extraordinary thing about Boris’s hypocrisy is the fact we find it extraordinary. We do find it extraordinary. I believe we’re right to find it extraordinary. But the reasons it’s wrong depend very particularly on Jesus Christ and his revolution. It’s a revolution I trace out in my forthcoming book, The Air We Breathe, but I’ll leave you with the argument in a sentence: You may never have set foot inside a church, but if you’re outraged at the ways the powerful are using their powers, I’d urge you to press into those moral intuitions: that is your Christianity talking.

Glen ScrivenerGlen Scrivener is an evangelist and director of Speak Life. He is the author of many books including The Air We Breathe.
Follow @https://www.twitter.com/glenscrivener