Jesus was the king of silent protest. He’d be proud of the German football players

As Germany posed for a team photo, they placed their hands over their mouth in protest against FIFA’s sanctions of the One Love armband. George Pitcher ponders the power of silent protest 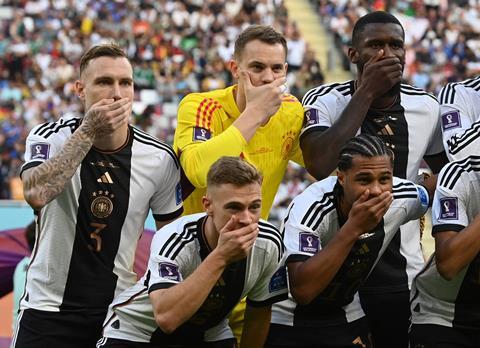 I fondly believed for a moment that I might be coining the hashtag #NotWatching on social media as I walked to the pub on Sunday afternoon with a son to avoid the opening game of the World Cup in Qatar.

Never mind that our friendly host, Martin, had rigged the biggest TV screen he could find on the garden wall of the Runt In Tun (pig in a barrel), with tented seating from the rain and beer on tap. Not watching became as much of a challenge to the Christian conscience as averting attention from Matt Hancock in another contest as he croakily asked for “a little forgiveness” (but that’s another story).

It turns out that #NotWatching was already far more viral than I had imagined. My friend David Landrum wrote here last week why he’s not watching, principally because of religious intolerance in Qatar.

Since play started, the arguments have developed. Either we should get on and enjoy the football and support our boys, or doing so makes us complicit in Qatar’s woeful human rights record and alleged financial corruptions.

It’s the silence that displaces political power, in favour of infinitely greater truth

Meanwhile, either the England team should have worn their One Love rainbow armbands for their first game in support of gay rights, or not have travelled to Qatar at all, or… actually I’ve not heard any cogent counter-arguments (there have been some plain idiotic ones) for just joining the World Cup and shutting up.

In the pro-participating lobby, there has been more than enough “whataboutery”. What about England’s triumph as hosts in the World Cup of 1966, when homosexual acts were only legalised in the UK the following year?

What about British teams competing in last weekend’s Grand Prix in Abu Dhabi? What about Russia hosting the World Cup in 2018? What about China staging the Winter Olympics this year?

Whataboutery is annoying, because we so often do what we can, not what we ought to. Past injustices don’t negate current ones. A slowly-awakening conscience is better than none at all.

I’ve also heard the case that Russia and China matter on the world stage and Qatar really doesn’t, so it’s important to turn up and object in Moscow or Beijing, but not in Doha. This is an argument that doesn’t stand up for a nano-second of extra time.

And not just because gays and migrant workers aren’t less important in Qatar than anywhere else in the world. But because UK trade with Qatar was worth some £35 billion this year. That’s a little more than half what our trade with Russia was worth in the year leading up to its invasion of Ukraine, but it ain’t hay; especially now that Russian trade has dried up due to sanctions. So realpolitik argues that we join the World Cup.

Follow the money – that’s an article of economic (and criminal) faith rather than religious conviction. But Christian scripture too exhorts us to “make disciples of all nations.” (Matthew 28:19-20). That’s a bit hard if you don’t turn up in other nations. And the oppressed of Qatar (including Christians) would probably welcome us standing in their corner.

This is where the dreaded hypocrisy cuts in. It’s one thing to turn up, but it’s not standing in anyone’s corner - except the Qatari ruling elite’s - to take off the rainbow armbands as soon as threatened with a yellow card.

Also in this context, note the media adulation that accompanied Saudi Arabia’s surprise win over tournament favourites Argentina. At the time of writing, Saudi has executed 17 prisoners for drug offences in the past fortnight. That’s not whataboutery, that’s a dereliction of moral duty at the same sporting event.

So what to do for the best? I’m far from the first to note that Iran’s team, ahead of their match with England, refused to sing their national anthem in protest against the oppression of women refusing to wear the veil in their country.

Nor am I first to note the heroism of other sporting gestures of political demonstration down the years: The clenched-fist Black Power salutes from the winners’ podium of sprinters Tommie Smith and John Carlos at the 1968 Mexico Olympics; more recently, the likes of Chicago Bulls’ Derrick Rose donning a T-shirt that read “I can’t breathe”, the last words spoken by George Floyd as he died at the hands (and knee) of Minneapolis police.

These – and many others besides – have in common with the Iranians’ World Cup dignity that they are, literally, silent protest. A point eloquently underscored by the German team covering their mouths for their team photo ahead of their match against Japan, silenced by Fifa over what the Germans called “non-negotiable” human rights.

It’s the silence that is so powerfully exercised in the face of worldly power, as the Christ stands bound before Pontius Pilate. It’s the silence that displaces political power, in favour of infinitely greater truth. It inverts that power as surely as it did in Pilate’s palace.