’Doubting Thomas’ gets a bad press. But in today’s post-truth world, full of fake news and disinformation, there is much we can learn from him, says Rev Peter Crumpler 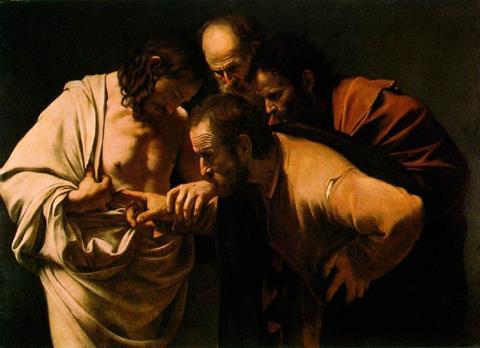 Thomas was famously not there when the resurrected Christ came and stood among the disciples as they gathered behind locked doors. When they told him what had happened, he said “Unless I see the mark of the nails in his hands, and put my finger in the mark of the nails and my hand in his side, I will not believe.” (John 20:25).

Theologians through the centuries have speculated about why Thomas was not with the others, and have drawn all kinds of conclusions. One described him as “gloomy and pessimistic”. Thomas, he said, was disposed to disbelief, tended to isolate himself from others and could not face the contradiction between what he was being told by the other disciples and the stark reality of the cross.

Having had his doubts answered, Thomas goes on to show his strong commitment to the gospel

Perhaps. But Thomas also showed a healthy scepticism about what he is being told, was willing to ask questions – and needed to be convinced by the evidence. Three useful characteristics of anyone seeking to navigate today’s post-truth environment, where people’s emotions or pre-determined beliefs can skew their view of the facts.

Thomas has a history of speaking out. In John 14:3-7, Jesus tells his disciples: “If I go and prepare a place for you, I will come back and take you to be with me that you also may be where I am. You know the way to the place where I am going.”

It’s Thomas who is brave enough to ask the question that perhaps the other disciples had in their minds. He says: “Lord, we don’t know where you are going, so how can we know the way?”

Jesus replies: “I am the way and the truth and the life. No one comes to the Father except through me. If you really know me, you will know my Father as well. From now on, you do know him and have seen him.” It is one of Jesus’s key declarations, central to the Christian faith for many, and it comes in direct response to Thomas’s question.

Traditional accounts speak of Thomas being a much-travelled evangelist for the gospel, dying as a martyr in India

In John 11, when Jesus declares his intention to go to Bethany, where he will raise Lazarus, on his way to Jerusalem, Thomas makes a stark, gloomy prediction to the other disciples: “Let us also go, that we may die with him.” (v16). Again, Thomas says aloud what the other disciples may have been thinking. He raises his doubts.

So in today’s world of disinformation, where conspiracy theories, fake news and false narratives can be across the world with a few strokes of a keyboard, what can we learn from Thomas?

Just because everyone on your social media timeline or in your friendship group believes something is true, it doesn’t mean that it is. You should still do your own research, check out the sources of the information and reach your own conclusions. That might not always make you popular, but you will be well-informed.

2. Don’t be afraid to ask questions

“I could never be a Christian,” a sceptic said to me, “I ask too many questions.” Yet questioning is good – and much of Jesus’s teaching in the gospels arose from questions he was asked. Thomas asked questions, and opened up new avenues of conversation and dialogue. Our faith can bear the weight of questioning and challenge, and we can be confident in it.

3. Be willing to speak out your doubts and reservations

The chances are that many other people are feeling the same way, but are holding back. Like Thomas, be the one to put the discomfort into words. That way, the truth of a situation becomes known and can be addressed. People raising concerns, such as whistle-blowers acting on their conscience, can open up dark situations to the light of the truth.

In John’s gospel account, when Jesus appears again to the disciples, now with Thomas among them, Jesus speaks directly to Thomas. He addresses the concerns Thomas had raised, offers him the evidence of his own risen body and calls on Thomas not to doubt but to believe. In response, Thomas declares: “My Lord and my God!” (John 20:28) demonstrating his full acceptance of Christ’s lordship and divinity. He doubted no more.

True, Thomas is lovingly reprimanded by Christ, but the episode is recorded in the gospel as an encouragement to the generations of believers who will come after and will not have the benefit of Thomas’s first-hand experience. Jesus says to Thomas, “Because you have seen me, you have believed; blessed are those who have not seen and yet have believed.” (John 20:29)

Thomas is numbered among the disciples in Acts 1:13, and traditional accounts speak of Thomas being a much-travelled evangelist for the gospel, dying as a martyr in India.

Having believed, having had his doubts answered, Thomas goes on to show his strong commitment to Christ and to the gospel. Having had his questions and concerns addressed, Thomas speaks out the truth with conviction and power. He is a true apostle for our times.