Doubt is becoming trendy. Even among Christians

With talk of 'deconstructing' your faith on the rise, and Christians embracing the view that doubt is healthy, Chris Schorah says we should be emphasising the timeless truths of Christianity, and stand firm in what we do believe 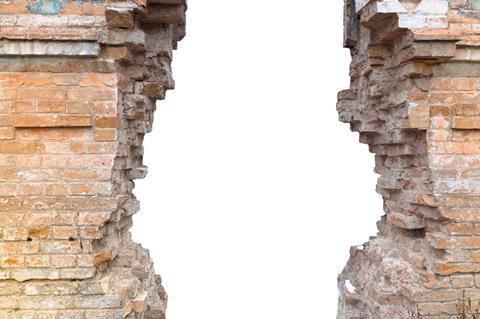 It has become fashionable in Western society to doubt the reliability of many things and so distrust and uncertainty are beginning to dominate our thinking. Christianity has not escaped this sceptical approach, with challenges to the meaning of our scriptures and the wholesomeness of our beliefs now coming from within.

Brian McLaren has long championed “paradox and uncertainty” while fellow US Christian author Peter Enns wrote a book suggesting that to be ‘certain’ about your beliefs is not a sign of mature faith, but a sin (The Sin of Certainty).

Here in the UK, Steve Chalke has argued we’ve “misread the Bible”, which he believes “is not infallible”. More recently Greg Boyd has encouraged Christians to “rethink everything we thought we knew” and the Theos director Chine McDonald has written that “everything is grey”, supposedly obscuring any clarity Christians might have about their faith.

Is there is any substance to these arguments that traditional Christian beliefs are drifting on a sea of doubt?

Both the spiritual and physical realms contain uncertainties and mysteries. Even our scientific knowledge has undefined edges. Discoveries in physics are indicating that our world emerges from a sea of unpredictable probabilities and forces. But however uncertain its foundations, emerge it does and in a stable, understandable and manageable form, which enables humans to thrive.

Similarly, from a spiritual perspective, God is unapproachable, unfathomable and deep mysteries surround him. Yet this same incomprehensible God chooses to reveal himself through the scriptures. As with the material world, there are some reliable truths that help us flourish. These run clearly, consistently and unchallenged throughout the heart of our faith. They tell a logical story of an Almighty Creator God who is transcendent and sovereign and yet intensely relational and compassionate towards us: both our Lord and Father, our Judge and Saviour.

In advocating the stability of our biblical foundations, I’m not saying that there aren’t imponderables, paradoxes and difficulties within scripture with which we have to wrestle. This would be expected in writings that need to be accessible to many different cultures. I agree there is greyness in our scriptures. What I’m opposing is the idea that we enter this process with a suspicious spirit or an imperative of scepticism. We should not build on a foundation of questioning everything and believing that all is grey. There are no good reasons within the principles of either our spiritual or material foundations for attacking basic biblical truths in this way.

We should not build on a foundation of questioning everything

Loose thinking about truth and our fundamental beliefs is destabilising both our society and our faith. I know that some Christians have been encouraged in their cynical attitude by the failure of conservative evangelicalism to allow an examination of aspects of our faith that appear difficult or at odds with our culture. However, I fear the pendulum that once bashed people with authoritarian fundamentalist doctrines has now swung past the centre of sound orthodoxy and is at the other extreme, where doubt is being encouraged as a sign of spiritual maturity. And I cannot find any biblical basis for that position, which at its worst is smashing away essential foundations of belief.

I guess this change in the direction of swing began sometime before I become a Christian. My conversion, from an agnostic background, was dramatic. As a medical research scientist, I was challenged in my newfound Christian beliefs by my sceptical colleagues. I expected that. What I did not expect was for my rather conventional Christian views also to be questioned by some of the leaders in the church. They were beginning to teach that scientific discoveries and literary-critical analysis of the Bible were seriously challenging the historical reliability of much of the New Testament. So, just as we are seeing today, an attitude of disbelief was invading the Christian faith. And the damaging effects are with us again. I hear cries of doubt, from those swimming against traditional principles, ringing out today over their troubled waters, just as, years ago, I heard those of their liberal predecessors, as they too were slowly sinking out of faith, engulfed by an ocean of scepticism.

But the 20th century liberals at least had some excuse. The tide of critical thought emerging from academia in those days had risen high and its waves were relentless. But, within the last 40 years, much of this has been washed away and there is now very little scholarly support for seriously doubting the truth of the essentials of the biblical story. The critical techniques, which once questioned the veracity of the New Testament, have themselves been shown to be unreliable. This has cast serious doubt on the robustness of the negative conclusions that had been drawn. Today there are few evidenced-based arguments for following disbelieving trends. Hence, orthodox Christian views are not seriously challenged by textual criticism. In contrast, recent holistic examination of the texts support the historical trustworthiness of the message, especially on its central features.

I believe we need to highlight the essentials of Christianity and declare the evidence that supports their veracity and reliability. We should be engaging in Christian apologetics, not Christian deconstructionalism.

We need to encourage confidence in the basics of our faith, rather than join in with the current vogue of being suspicious of everything.

Chris SchorahChris Schorah is a retired medical scientist who has an interest in Christian apologetics, particularly in the areas of science, faith and the reliability of scripture. For a number of years he was involved in leading a Pioneer Church in Leeds.