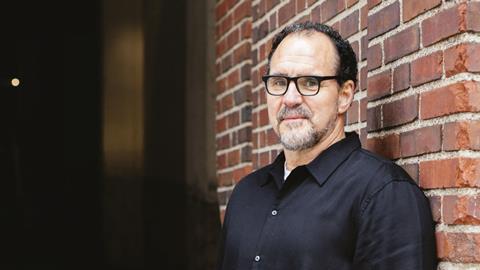 Three years before the pandemic struck, Greg Boyd received an unusual prophetic word, which prompted him to move his church’s material online. We asked him about this seemingly unique warning about Covid-19, and how he feels about being labelled both ‘charismatic’ and ‘progressive’

It’s rare for a sermon to be considered front page news by The New York Times. But Greg Boyd isn’t your typical megachurch leader. The 64-year-old senior pastor of Woodland Hills Church, Minnesota, is a gifted preacher who has often addressed some of the most contentious political and theological issues in America.

Boyd’s ‘The Cross and the Sword’ sermon series was first preached in 2004 as a warning to his 5,000-strong congregation not to fuse their faith with partisan politics. The Church is called to change the world through humble acts of self-sacrificial love, not through passing laws against abortion and gay marriage, he argued. The messages were so controversial that 1,000 people left the church.

“When the Church wins the culture wars, it inevitably loses,” Boyd declared. “When it conquers the world, it becomes the world. When you put your trust in the sword, you lose the cross.

The loss of a fifth of their congregation forced the leadership of Woodland Hills to make significant staffing cuts. Yet Boyd and his leadership team held to their views and, in the years since the mass exodus, Woodland Hills has rebuilt, and flourished. It has developed a strong online following and Boyd now connects with thousands worldwide through ReKnew, a website which hosts articles and podcasts that encourage Christians to “rethink everything you thought you knew”. Topics include the rapture, hell, penal substitution and biblical inspiration. That list might make Boyd sound like a liberal, but he’s not. He takes spiritual warfare seriously, welcomes the use of spiritual gifts and is a passionate preacher of the gospel.

When it comes to theology, Boyd is best known for espousing Open Theism. His contention is that God does not have only one plan for us, but many. As it says in Jeremiah 29:11: “‘For I know the plans I have for you,’ declares the Lord, ‘plans to prosper you and not to harm you, plans to give you hope and a future.’” If we go against plans A, B and C, then God will lead us onto his plan D. Rather than teaching that God has determined (or fixed) the future, Boyd says our free choices make a real difference. “In a creation filled with free creatures, God’s will is not the only variable that counts in deciding how things unfold.” God may be all knowing, but he understands the future “partly as a realm of possibilities” and does not have a “divine blueprint”.

This teaching is regarded by some of Boyd’s fellow evangelicals as outright heresy. The popular Calvinist pastor John Piper, who ministered a few miles down the road, has said that Open Theism fatally undermines the sovereignty of God. At the turn of the millennium, Piper, and others, tried to have Boyd’s view outlawed by the Baptist General Conference. The attempt narrowly failed but the issues are still debated to this day.

Boyd has written 22 books for both popular and academic audiences. One of his best known is Letters from a Skeptic: A Son Wrestles with his Father’s Questions about Christianity (David C Cook), which contains the detailed correspondence between Greg and his father which did, eventually, lead to his father coming to faith. The Jesus Legend made the case for the historical reliability of the Gospels while Seeing is Believing: Experience Jesus through Imaginative Prayer (Baker) has remained in print for 17 years, despite it once being dubbed: “too evangelical for Catholic publishers and too new-agey for evangelical publishers”.

During our Zoom call I find Greg to be fluent and winsome, with instant recall of relevant Bible verses. He says he has ADHD. There is something of a super-intelligent, enthusiastic, 12-year old about him.

In 2017 the executive pastor of Woodland Hills Church, who is recognised as having a strong prophetic gift, told them to put everything online. They did, and have prospered during the pandemic. My questions begin with this seemingly unique prophetic warning of Covid.

SPIRITUAL GIFTS OPERATE WELL IN SMALL GROUPS AND PERSONAL CONTEXTS, BUT NOT ALWAYS IN AN AUDITORIUM

Tell us about the advice to put everything online.

Janice is part of our leadership team and has a prophetic gift that has been of immense value to us. She is as logical, Spock-like, as stoic as any woman I have ever met. But soon after she came on staff, she started getting these visions. She never knows what they are and she’s always embarrassed by them but she feels that she can’t help but share. That’s part of what makes her credible – the last thing she wants is the spotlight. She’ll probably get mad at me for sharing this.

About a year and a half before Covid hit, she had this sense: Start getting all of your material online, because that is the direction our church is headed. There was a sense of urgency about it.

O me of little faith! When lockdown started, I thought: Our budget’s going to tank, we’re going to have to cut staff. But our church has grown, our finances have grown, it’s just been amazing. 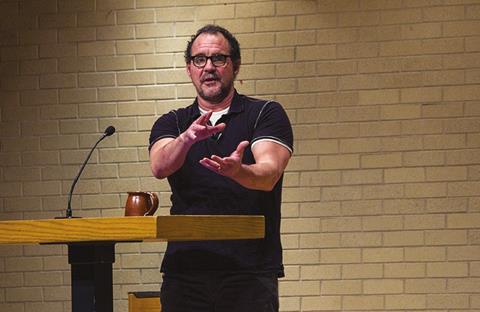 Some people would say that the prophetic advice to put everything online was a real confirmation from the Holy Spirit that he wants your teaching to prosper.

I hadn’t thought of that. Maybe because I’m so paranoid of people who make claims like that. I guess when you hang around someone like Janice for so long, it almost becomes your normal. It’s a well-known fact among the staff of Woodland Hills that you don’t want to have an affair going on, because God will tell her. She’s busted a couple of people.

Do you teach and encourage all the gifts of the Spirit? Prophecy, tongues, interpretation, healing…?

Yeah, we’re open. It’s not like our front burner. We lean more towards a general kingdom message but we definitely believe in the gifts of the Spirit used in the proper context. We don’t have that opportunity in our large group meetings. [The gifts] don’t operate well when most people don’t know most other people. When Paul is giving instruction on prophetic gifts, he’s talking to house churches. These are people who meet regularly. They are covenanted together. They know each other. I think the gifts operate really well in small groups and in a personal context. When you get into an auditorium, the people who are most inclined to speak out, as though they have a word from the Lord, are not the people you’d want to be speaking out.

You believe in a personal devil, don’t you?

I would have trouble believing in an all-good and all-powerful God if I didn’t believe in a devil.

Do you also teach and practise deliverance?

Yeah. Part of our counselling ministry is a deliverance ministry. We just keep it really simple. The thing that was distinctive about Jesus’ deliverance ministry was how simple it was compared to what everybody else was doing. Other exorcists need to know what demon is doing what, they need special incantations and charms and objects to get them out. Jesus just says: “Get out!” We basically do that.

Sometimes it gets more complicated when you have to ask questions about woundedness and things. Whenever there is a deliverance issue, we also make it a counselling issue and vice versa. You never know all that you’re dealing with, so you deal with the natural and the supernatural.

So you’re charismatic and progressive? There don’t seem to be many churches like yours.

I agree that we’re odd. We didn’t set out to become a quasi-charismatic, Anabaptist, peace, social action church, but that’s just how it grew.

For a long time, I felt alone. We were looking for a tribe. In 2005, when The New York Times featured us, we found out that there are people and churches all over the place on the same journey. We started to find each other. There’s now an organisation called the Jesus Collective (jesuscollective.com). It serves as a resource centre for people who are coming to this kind of vision. The easiest way to sum it up is: we believe in a Jesus-looking God, who is raising up a Jesus-looking people to transform the world in a Jesus kind of way. It’s very exciting.

You live and work very close to where George Floyd was killed. How have you responded to that?

Yes. And Philando Castile. He worked at the school at the edge of my block. The racial tension that was ignited with George Floyd was there already in Minneapolis for quite some time and we’re very much a part of that.

George Floyd pierced me so deeply. It was just like the face of white supremacy. For a lot of folks, their eyes were opened because they finally saw something that was unambiguously racist. We just roared on that. We talked about race issues in America, systemic racism – all of that – non-stop for maybe ten weeks. To the point that some people were saying: “OK. Can we maybe move on?” But we decided that this was so important, that this was a Kairos moment when eyes were being opened. 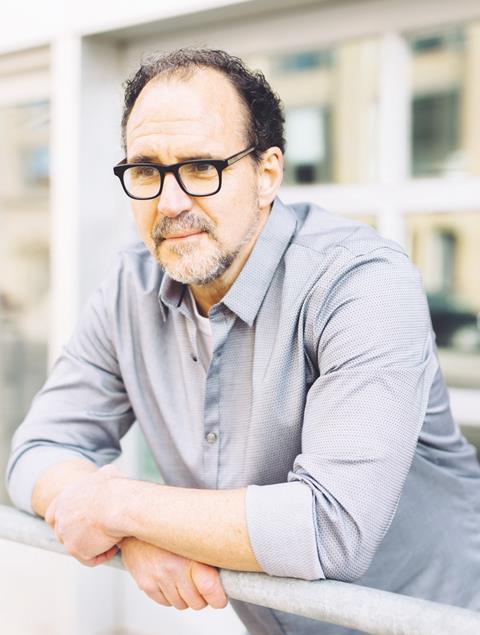 How was that received?

We lost some people as a result of that. If your gospel doesn’t have some offensive edge to it, you’ve got to wonder if you’re preaching the gospel. Paul, in Galatians 5:11, uses that as an argument for the correctness of his position. He says: “If I was still preaching the law, then there wouldn’t be any offence.”

Racism has been a front burner issue for Woodland Hills throughout our history but, for a lot of folks, this is the first time wading in the water and they’re like: “I don’t know what to say. What do you do?” So I ended up coaching a number of white pastors.

We have a thing called Transform Minnesota and they’re always putting on reconciliation seminars. They already had a network of black and white pastors – there’s usually 25 pastors. But about four weeks after the George Floyd incident, we had 300 pastors. And the number of white pastors who were willing to take a stand - I was really impressed with that. It was the greatest solidarity I have ever felt, concretely, in the Church here.

I’m in an odd season right now. God is doing a new work in me. I had planned, for over 20 years, to write the definitive book demonstrating the influence of Hellenistic philosophy on the early Church, and how all the deterministic aspects of Christian theology come from Hellenism, not the Bible. Over the years, I’ve collected three gigabytes of notes. I’ve been trying to get back into that book and I feel like I’m moving Mount Everest with a spoon. I’m not that interested in doing it. I finally came to the conclusion that I’m supposed to let that go.

Right now, I’m taking a sabbatical from writing. I’m going for a lot of walks, taking more hikes than ever. I’m just trying to commune with God and just be. Let’s just see what new thing is going to rise up.

Roger HarperRoger Harper has worked for over 30 years in Anglican ministry. He is a full time Prison Chaplain and the author of A British Crash and The Lie of Hell. He blogs at rogerharper.wordpress.com