After a black pupil was strip searched by police at her east London school, protests erupted. A safeguarding report found the search of the 15-year-old girl, known as Child Q, was unjustified and racism was “likely” to have been a factor. Arlene Small, a Christian and a barrister who attended one of the recent protests, responds 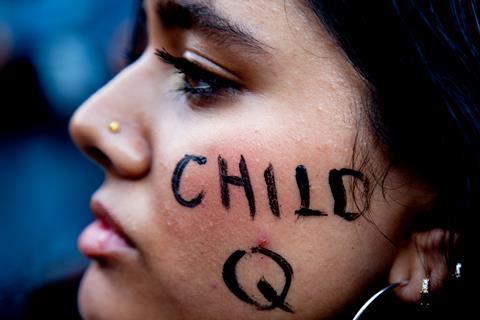 Demonstrators listen to speakers in north London in support of a 15-year old black schoolgirl known as Child Q who was strip searched at school after being wrongly suspected of carrying drugs.

I’ve been surprised at how deeply I’ve been impacted by the story of Child Q, and I know that I’m not alone. It is deeply disturbing to even read the details of what happened to her that day – removed from an exam, she was strip searched by two police officers, without a responsible adult present or her parent’s knowledge and all the while on her period. It has had a profound effect on the “former bubbly” student, upon whom no drugs were found. Overnight, she went from “top of the class” to “a shell of herself”, her aunt telling reporters that the incident has caused her to self-harm and require therapy.

It has also had a profound effect on mothers and women everywhere - but especially on black women and girls. Among those of us who were caught sleeping - and I put myself in that category - it has triggered a re-awakening; a fresh awareness of the bias that still exists and all the work that still needs to be done to eradicate it.

My own daughter is 13. When I heard about what happened to Child Q, she was still at school. I kept thinking: What would I have done if she had been put in that situation? As soon as she came home, I sat her down. It was something that I felt could not wait. I had to make her aware of what had happened; to make sure that she was educated about what to do if the same thing ever happened to her. I had to speak to my 13-year-old daughter about very adult issues – issues that I should not have had to address. Because of what I was saying to her, my daughter had to mature within minutes.

They looked at Child Q and thought: She’s a black girl. She can cope with it. She doesn’t need her mum

I’m a barrister by profession. Because of my role, I take it for granted that I can walk into a court, conduct myself according to the rules of professional etiquette, and be respected for that. I’d almost forgotten what it was like to have someone look at me and think: Oh, that’s a black woman or: I’m going to look at this person differently because of the colour of their skin. I’d almost become desensitised to that. But this has awakened my consciousness once more.

You can walk down the high street, and every shop will be advertising fundraising collections for Ukraine. But there are wars in Africa and the Middle East that have been going on for years and do not receive the same attention. I think that it is directly linked to the way that black people are perceived around the world; that we’re either the authors of our own misfortune (it’s our own fault) or we’re so used to struggling in this way that we’ll muddle through on our own. There’s a perception that we can suffer; we can take anything that comes our way and bounce right back up.

Perhaps they looked at Child Q and thought: She’s a black girl. She can cope with it. She doesn’t need her mum, she can tough it out. It’s all part of that endemic - almost racist - approach that says that black people are somehow not really people at all. That’s what I’m really angry about; that, and the injustice that attitude invariably leads to.

One people, one voice

But black people are human. We suffer pain. We can be hurt. We can feel trauma. We can be harmed emotionally and physically in all sorts of ways, just like everybody else.

Do I think that things will change now that what has happened has been exposed?

In my role as a barrister, it’s often difficult to give people hope that justice will prevail, because often the decision of the court does not seem fair to the people involved. It’s the same here. The optimist in me thinks back to the recent protests - seeing how galvanised and motivated people of all races, ethnicities and colours were – and is encouraged. I would hope that this groundswell of attention and public outrage is sufficient to see heads roll, because that’s what needs to happen. People need to be called to account for this; it cannot be swept under the rug. We’ve got to keep the momentum up. To keep talking about it and waving the flag for Child Q. This cannot be allowed to fade away into the background. We all have to play our part and keep pressing the government, and those in authority, to take action.

And as black people, we need to stop ‘apologising’ for being here. Recognising that our own experiences are valid is half the battle. There can be this sense of: We don’t want to make too much noise. We don’t want to draw too much attention to ourselves.

When I spoke to my daughter and suggested she talk to her friends at school about what happened, her reaction was: “I’m not sure whether we’re allowed to do that.” I told her that I would come to her school and speak to her teachers. If we stop apologising, stop being made to feel like it’s our fault or that we shouldn’t speak out about injustice, we can actually go into places like schools and public meetings and start speaking out. My husband used to tell me how when he was at school, his teachers used to ask him before parents evenings whether there was anything his parents were concerned about so that they could be prepared! It meant that they knew his parents had no trouble speaking out when things were not right at school. That’s the kind of parenting that is needed, and the kind of parents that my husband and I strive to be, so that our daughter feels supported. Sadly Child Q’s parents never had that chance - until now, and all parents must get behind them to make sure that this never happens to any other child.

I told my daughter that day that there’s nowhere she cannot go. If she wants to be Prime Minister, she can. I have taken her to events put on by my professional body, the Bar Council, so that she has the confidence to be around all kinds of people. She was younger at the time and thought it was a real drag, but I want her to know that there is nowhere she doesn’t belong. Even if she’s in a situation thinking: What am I doing here? I’m the only black person here, I want her to have the confidence to say: “So what?” So on that day, my attitude was, We’re going to go, we’re going to walk around and we’re going to eat the ham and cucumber sandwiches. And we’re not going to apologise for being here.”

Arlene SmallArlene Small is a barrister specialising in Family and Children Law, and is passionate about advocating for others.