Last week, the Church of England general synod discussed removing “all stand” and “all kneel” from liturgy to avoid excluding disabled people. Jade Reynolds, who has used a wheelchair since the age of 12, says inclusive language is important, but inclusive behaviour is vital 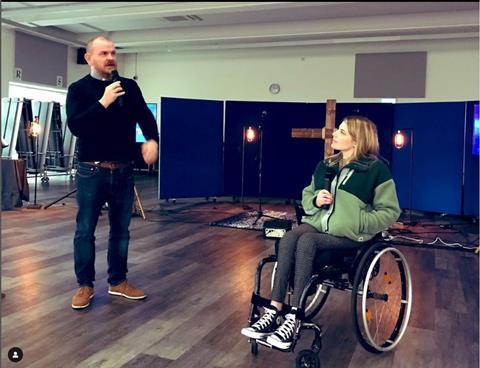 As a disabled woman, I have been watching the current debate on inclusive language within the Church of England with keen interest. Following a vote at General Synod last week, the CofE have been told to consider rewriting prayer books to make them more inclusive for congregations.

In response, Christian Concern have expressed fears that “doing away with words and traditions that have always been properly understood within their context” is a step backwards, arguing that no one using them means to discriminate.

The rewriting in question is around phrases in liturgy such as “all stand” or “all kneel”. So how do I, as a woman who has been a regular church goer all my life and paralysed since the age of 12, feel about the proposals?

On the one hand, I believe it’s important to remember that rewriting prayer books isn’t rewriting the Bible. Traditions are important and powerful, but they aren’t scripture. We’re not changing Jesus’ exclusive language in a bid to be more accepting (that would be blasphemous). Prayer books and liturgy are different, and have been reformed in the past.

Additionally, our language conveys culture. The less we include people in our language, the more likely it is that we’ll also fail to include them in other meaningful expressions of church life, membership and fellowship. I imagine the original heart of “all stand” would have been to unite the congregation - whether you had been in church 20 years or 20 minutes, you were equally welcome to partake together. Saint and sinner alike, we’re invited to stand or kneel together, having both been made right with God through Jesus.

In light of this heart for inclusivity, does asking a congregation to do something collectively alienate those who can’t? And if so, how far should we go to rectify this? Do we all stop standing or kneeling together in case those who are unable to do so are feel alienated?

Well, no, not in my opinion. Firstly, catering to the many doesn’t mean forgetting the few. At St Luke’s Blackburn, where I worship, we use phrases like: “Please stand if you’re able”. This doesn’t seem like a difficult adaption to liturgy, and ensures that those with disabilities, like myself, feel more than included.

Personally, I do not feel offended if the person leading forgets to say “if you’re able” - although I know some do. They feel considered and seen when it is included, and I get that. For me though, I just know that bit doesn’t apply to me. A bit like when the vicar invites the worship band to come up and play - I can’t walk and I also can’t play a musical instrument but, as neither of those things are central to my worship of Jesus, I’m not going to lose any sleep over my inability to partake in those moments, and I’m not offended by the invitation to those who are able.

Unless it’s a brand new injury, every person who is unable to stand has had to come to terms with that, and has developed the character and resilience that comes with such an adaption. While all disabled people have resurfacing moments of sadness about their situation from time to time, the fact of the matter is we simply would not cope if, every time someone used a common phrase that referenced standing or walking, we took it as a personal affront.

I was once giving my testimony at a youth gathering and was introduced (entirely innocently) with the words: “Let’s give a huge round of applause to Jade who is going to come up now and tell us all about her walk with Jesus.” There was a short pause, before my husband and I burst out laughing and everyone else joined in. The lady leading the service was mortified, but it was an honest (and hilarious) mistake. She was merely using a common Christian phrase. There was no malice intended.

I do believe language is important, but I also believe we can make matters worse by being so concerned about offending people that we over-focus on our differences. On more than one occasion, my friends and family have been told they shouldn’t refer to me as a “disabled woman” but as a “woman who is disabled” - usually by those unaffected by disability, because they have heard that it’s the ‘correct’ terminology. Their reasoning is usually based on the idea that the person should come before their disability, as their disability doesn’t define them.

Obviously, that’s technically correct, however we rarely fall back on the same logic when someone uses the phrase “married woman”, for example. I’m also so much more than my marriage, but I wouldn’t dream of pulling someone up on their choice of language if they called me “a married woman” by saying: “Erm excuse me, my marriage doesn’t define me! I think you’ll find the acceptable term is “a woman who is married!” In that context, we all understand that “married” is a description, not a definition; an adjective, not a noun. The same applies to “disabled”. Descriptions only define us if we let them.

Catering to the many doesn’t mean forgetting the few

My biggest concern is that we may fall into virtue signalling while failing to apply the actual substance that would genuinely make a big difference to disabled people’s experiences of church services and church family. Most church-going disabled people I know care more about inclusive buildings than inclusive language. Inaccessible entrances, toilets and seating (pews) can make church life infinitely more challenging and less welcoming than adding “if you’re able” to “please stand”.

The changes I think churches must implement - if they have still yet to do so - come from asking the question: “Are disabled people considered when we plan our church events?” I’ve been more alienated through consistent lack of practical thought than occasional linguistic oversight. And let’s face it, in most churches, oversight is all it is.

Jade ReynoldsJade Reynolds is a theology graduate and the co-host of the faith-based podcast 'Bring to Light' which she leads with her husband, John. They also have over 140k followers on TikTok. She has been paralysed since the age of 12, a mum since she was 25, and a cake addict since birth.