As our nation mourned, God sent a rainbow to remind us of his faithfulness

A double rainbow appeared over Buckingham Palace shortly before the announcement that Queen Elizabeth II had died. Pete Greig wonders if this sign in the sky was more than sheer co-incidence 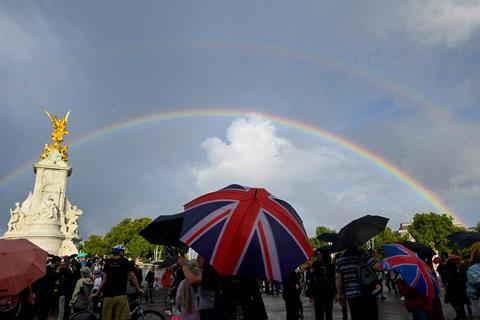 I wonder if the Lord was speaking yesterday when that great double rainbow appeared in the sky over Buckingham Palace, just as the Queen’s death was being announced to the nation?

There we were, shaking our heads in shock, trying to process the end of an era and the loss of one of the world’s greatest Christian leaders, when this sign appeared in the sky reminding us - as it has since the days of Noah - of God’s eternal, unshakeable, covenant-keeping faithfulness.

And faithfulness was, of course, the hallmark of her reign. At a time when words are cheap it’s truly extraordinary that Elizabeth II honoured every promise she made. Perhaps this ‘long obedience in the same direction’ was one of the qualities that made the ceremonial ruler of our nations also the Queen of our hearts.

A constitutional monarchy is of course, as Winston Churchill said, ‘the worst form of government – except for all the others that have been tried.’ Whatever we make of the institution of the monarchy, and wherever in the world we happen to live, we can hear heaven’s applause as Elizabeth Windsor finally jettisons that walking-stick, straightens her spine, and steps into the courts of her King.

As well as reminding us of God’s faithfulness, a rainbow also simply speaks of the refraction of light at the place where sunshine meets rain. And perhaps this too can be a sign for us at a time when such very dark clouds are filling the skies. Few can recall a season of such travail. We nod wearily hearing Jesus say: “You will hear of wars and rumours of wars…Nation will rise against nation…There will be famines and earthquakes in various places…many will turn away from the faith.” (Matthew 24:4)

When dark clouds shroud the earth, it is the rainbow that reminds us that beauty can still prevail. Somehow hope surprises grief.

The prophet Isaiah describes a moment like this after the death of another long-serving monarch: “In the year that King Uzziah died, I saw the Lord…seated on a throne.” (Isaiah 6:1) Few people could remember a life without Uzziah on the throne – he had reigned 52 years, presiding over an era of prosperity, innovation and peace. His death had shaken the nation. And yet it was then that Isaiah received his commission. Times of shaking have always been moments of extraordinary opportunity.

As the hottest, driest summer on record gives way to the rains of autumn, we sense the seasons changing in our nation. In three days we have gained a new prime minister and lost our queen. There is a changing of the guard and we must pray urgently for both our new prime minister and our new King (1 Timothy 2:1). Liz Truss and King Charles III will both need help beyond human power, and wisdom beyond their own to govern well.

This is a moment of vast opportunity. News cycles are describing the Queen’s faith; Justin Welby is preparing to point a vast global audience towards Jesus at her funeral; and our friends who might normally avoid talking about faith or thinking about death, are quietly turning to prayer.

Perhaps we may take that great double rainbow as a sign for our times? A reassurance of God’s faithfulness amid so much uncertainty, and a reminder of our Queen’s example as a persevering promise-keeper, a faithful light-refractor, and a faith-filled hope-dispenser in such dark and difficult days.

Pete GreigPete Greig is the bewildered founder of the 24-7 Prayer movement and the Senior Pastor of Emmaus Rd church. His latest book is How to Hear God: A Simple Guide for Normal People.