A new survey claims most Anglicans back gay marriage. But the truth is very different

According to recent headlines, 55 per cent of Anglicans believe that same-sex marriage is “right”. But dig a little deeper into the research, and all is not what it seems, argues Peter Ould 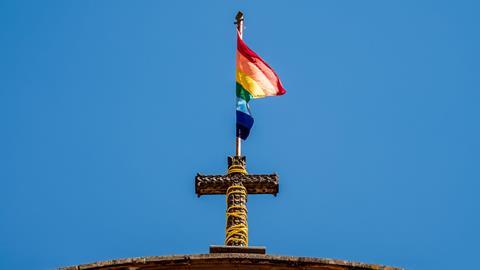 The Ozanne Foundation has published a new piece of research, conducted by YouGov, that claims that support for same-sex marriage is increasing among Anglicans. But what does that actually mean, and are the Anglicans surveyed in any sense connected to the people actually worshipping in the pews of the Church of England?

The survey claims that 55 per cent of Anglicans believe that same-sex marriage is “right” and The Times has a headline that the 'Majority of Church of England worshippers back gay marriage’. If you dig just a bit into the data however, you realise that the survey says nothing of the sort.

Let’s start with how many Anglicans there are. 5,120 people were questioned as a representative sample of the UK population. Of those, 1,088 (weighted) said they were 'Anglican’, over 21 per cent. In England and Wales that became 1,078 of 4,680, or 23 per cent. Let’s think about that for a moment – if these 'Anglicans' were in the Church of England and Church in Wales (the Anglican Church in Wales) every Sunday that would mean we had 13.5 million people in our pews each week. Actually, we wouldn’t, because we simply wouldn’t have space for them in the amazing revival that was going on!

Of course the reality is different – the most recent “Statistics for Mission” from the Church of England (the annual report on church attendance) tells us that the average weekly attendance (those attending on Sunday or another day of the week) is just short of 750,000. That means that almost 95 per cent of the 'Anglicans' in the survey are not regular church attenders, even in a non-Covid year.

Perhaps they attend for major festivals? Statistics for Mission tells us that Christmas attendance in the Church of England was 2.3 million. Even if we assume each of these was a single person (in reality, this number includes those who attend across multiple services and being counted once each time), that would mean that over 80 per cent of the 'Anglicans' took their faith so seriously they couldn’t be bothered to worship with other Christians at the celebration of Jesus’ birth.

It’s not looking good for any organisation that wants to rely on this survey to argue that there is pressure in the Church to change its doctrine. The most that can be claimed is that people who claim to be Anglican but are 95 per cent likely to not attend church regularly at all think pretty much the same as the rest of the non-church attending population of the country. Is this really an argument for the Church of England, who sees the Bible and not a mass vote as the source of its truth, to change its doctrine?

But it gets worse. We know from other research that the less likely you are to attend church, the less likely you are to believe basic doctrine. For example, the LifeWay Research 2020 survey in the USA found that those who didn’t attend church were half as likely to agree that God was perfect than those who did attend regularly, were two thirds as likely to affirm the Trinity, be less than 50 per cent likely to affirm the bodily resurrection of Jesus and as likely as not to deny Jesus’ divinity. Again, we have to ask whether these are the kind of people (non-attending, but religious affiliating) we want to be driving our doctrine? A massive 60 per cent of these people in the LifeWay survey believed that salvation was through one’s good deeds, not through the work of Jesus on the cross.

Should non-attending, but religious affiliating people be driving our doctrine?

YouGov itself has results that back this up. A survey in September 2021 showed that 70 per cent of the population never attended church, and 90 per cent only attended once or twice a year or less. Another YouGov survey showed that self-declared Christians (making up almost three-quarters of those surveyed) were more than 50 per cent likely to say religion wasn’t important in their lives, that 40 per cent didn’t believe Jesus was the Son of God, and that half didn’t bother attending church for either Easter or Christmas.

These are the kind of people that the Ozanne Foundation wants to hang its argument on – not the people actually attending church and doing the ministry of Jesus, but those who believe things contrary to basic Christian doctrine and have little evidence of commitment to Jesus.

Of course, some of these concerns could be dealt with by the Ozanne Foundation asking more questions via YouGov to see whether support for same-sex marriage changes depending on actual religious observance. After each of the two previous similar surveys I have offered to pay for such questions to tease out the answers, but there has been a wall of deathly silence from Jayne Ozanne and her supporters. Why might that be? Are they afraid that if they asked the views of the actual members of the Church of England, rather than seeking the opinion of those who use the labels of 'Anglican' and 'Christian' very loosely and don’t actually believe Christianity, that they might get a result they don’t like?

This survey doesn’t tell us anything more than that non-Church attenders believe the same things as other non-Church attenders who are simply more honest about not believing what Christianity believes. The Church of England should be led by the Bible and God, not an opinion poll.

Peter OuldPeter Ould is a Church of England priest and consultant statistician.