As Premier's Missions Week begins, Geoff Peters points out that the current statistics on Christian engagement in mission make for depressing reading. If we're to obey the Great Commission, we need to overcome fear, he says 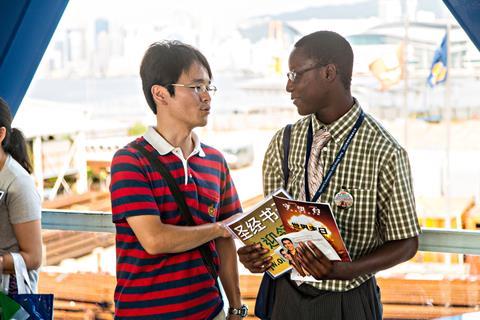 Did you know there are approximately 2.2 billion people in the world who profess to be Christians, yet less than one-tenth of one percent of us engage in cross-cultural missions?

If Christianity was a faith that was not inherently designed for sharing “to the ends of the earth” (Acts 1:8), this statistic could be understandable. But serving, loving and taking delight in delivering Christ’s hope to others is central to who we are. Actively engaging in God’s mission is the essence of how we should be living each and every day. We are disciples, to help make disciples. But the reality is, based on the numbers alone, most people outside the Church would have to conclude that “to the ends of the earth” not only isn’t a priority for us as Jesus followers, it barely registers as an incidental focus.

These data points disappoint and alarm me, and open the floodgates to a rush of questions. Chief among them: do we, as Christians understand God’s call to truly love the whole world?

With this question on our hearts and in our minds, the team at Operation Mobilisation started researching. We engaged with Christians in seven different countries to learn what they understand of God’s plans for the world. We learned which ideas motivate us to get involved and what ideas turn us away. The research nerd in me was both fascinated and disappointed as Christian after Christian, in their own language and in countries all around the world, highlighted what keeps them from engaging in God’s work with their whole life.

Here’s what we learned. Around the world, there are three common knowledge barriers and three common fear barriers.

First, as Christians, we don’t fully understand that when we said yes to following Christ, we became part of his missionary force; we opted into his mission.

Second, we don’t know that our Father’s invitation was for our full lives; many of us still think of God’s mission as a part-time gig. And third, that his goal is for all nations of the world - every woman, man, child, brother, sister, uncle, friend and enemy – to know who he is.

And when we think of stepping into that mission, it’s our fears of failure, safety and sacrifice (what we’re going to have to give up) which stop us from accepting the invitation that God has already extended to each of us. It’s almost like many of us said: “Yes, Jesus. I’ll follow you. As long as it’s not too scary.”

Fears about safety are drummed into us from a young age. “Look both ways before you cross the road!”, “Don’t touch the oven!” or in my case: “Don’t jump off the second storey roof! That large rubbish bag won’t work as a parachute!” My poor mother had her hands full.

We’re taught what to do in various emergency situations. My personal favourite was that, in the event of an earthquake, you should “crawl under your desk and put your butt toward the window.” The logic was that it’s better to pull shattered glass out of your behind than your face, but as a six-year-old learning this rule, it was just funny to hear adults talking about butts.

We should be choosing every day to look at our fears through God’s eyes, rather than our own

In our homes, cars and public spaces, safety is consistently a high priority. We avoid ‘bad’ neighbourhoods at night. We buckle our kids into age-appropriate car seats, and when they’re learning to walk, we put soft, protective guards on any and all sharp corners, like coffee tables and fireplace hearths.

Of course, fear also represents a loss of control. How do we personally view situations that threaten our perception of control? Are we willing to release our grip on what we think we can control? Or do we want to grab on tighter and resist?

As Christians, I believe we should be choosing every day to look at our fears through God’s eyes, rather than our own. God calls us to step out and trust him. Simply stated, fears give us an opportunity to grow as a disciple.

So I suppose when it comes to the idea of trusting in God, and stepping into his love to love the world, the only real question is… what are we afraid of?

Geoff PetersGeoff Peters is global chief marketing officer for Operation Mobilisation and author of The Family Business: a Parable about Stepping Into the Life You Were Made For (Tyndale House), which tells the fictional story of the ageing Jesse, founder of the nationally-known franchise Jesse’s Hardware, who wants to pass his legacy on to his five children. As his children face the challenges and fears of stepping out of the familiar into the unknown to continue their father’s mission, they discover the lives they were created to live.