US Christians campaigned for the end of abortion. Will the British Church follow in their footsteps?

As Roe v Wade is overturned, Tim Wyatt looks at the implications for the Christian pro-life movement in the UK 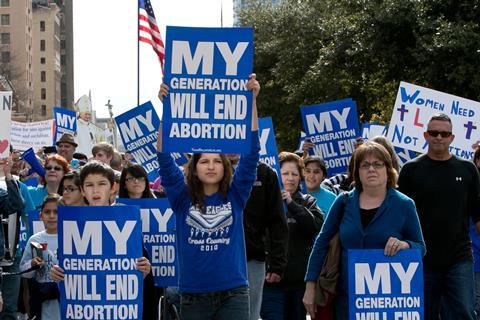 On 24 June, one of the most momentous US Supreme Court decisions of the past century – Roe v Wade – was overturned.

The constitutional right guaranteeing abortion for American women in all 50 states, which had stood since 1973, was no more. Instead, the Supreme Court ruled, the constitution was silent on abortion and laws must instead be determined by each state’s own government.

Almost immediately, dozens of states began passing their own legislation banning abortions – many already had such “trigger” laws on the books, which only required Roe to be overturned to come into effect automatically. While there was a huge backlash from pro-choice organisations and the Democratic Party in general, the end of Roe has sparked celebration across much of the US Church and political right. The famous megachurch pastor and author Rick Warren tweeted “Millions of unborn Americans say thank you!” while Pope Francis praised the judgement, likening abortion to “hiring a hit man”.

Alongside the mostly Republican-leaning states which are rushing to criminalise or restrict abortions, there have been comparable moves by pro-abortion states and the federal government under Joe Biden to explore ways to protect access to abortion for women. While ending Roe has been the pivotal goal of the pro-life movement for almost 50 years, many activists and church leaders have now said it is vital the work does not stop here.

Lois McLatchie from the Alliance Defending Freedom (ADF UK), a Christian group which has lobbied against abortion among other issues, said the anti-abortion movement had long been not just campaigning against abortion laws but also building a “pro-life culture that can sustain support for women and children”. This should expand now, she argued, pointing to the need for more crisis pregnancy centres to offer counselling and practical support to women in unplanned pregnancies who in many states no longer had the option to terminate.

Damilola Makinde, a trustee of a Christian pregnancy charity in central London, said much the same: “The overturning of Roe by no means ends the question of as a society how do we best honour women who find themselves in difficult situations and yet also protect the dignity of life in the womb. The jury’s out on that. The Supreme Court judgement is in on the overturning of Roe, but there’s a heck tonne of work to be done.”

Some have argued that the overturning of Roe will expose the shallow politicisation of the abortion debate by the religious right in America.

Many voices, including some Christians, predict those who have argued loudest against abortion laws will move on from the issue now the judgement has been reversed and will not work to expand maternity rights (America is the only developed nation on earth to not guarantee statutory parental leave) and social security for families.

But Dave Brennan, who leads the British anti-abortion group Brephos, said this was actually a “pretty empty slur”. There were already 2,500 pregnancy centres across the US, mostly led by pro-life Christians, which represented millions of dollars given freely by the church to support women and their babies.

Some pro-life believers are not rejoicing at the end of Roe. They argue prohibiting abortion does not significantly reduce the number of pregnancies terminated, it simply pushes women (especially those living in poverty or from ethnic minorities) to either seek dangerous unregulated backstreet abortions or to travel across state lines to less restrictive places. A number of large companies in the US have already pledged to pay for employees if they need to travel to find a pro-abortion state, prompting fury and threats of legal consequences from anti-abortion legislators.

However, pro-life activists insisted the data does not bear these fears out. McLatchie pointed to Poland and Malta, two European nations with highly restrictive abortion laws, which also boasted some of the best maternal health outcomes in the world. Brennan said evidence from a number of countries which had either legalised or criminalised abortion showed the number of terminations plummeted after a ban and soared after liberalisation. In Britain, there were an estimated 20-30,000 illegal backstreet abortions a year before the 1967 Abortion Act was passed; today, more than 200,000 abortions are carried out annually.

Makinde said a study in Texas which has barred the procedure after six weeks since September showed abortions had fallen by 60 per cent, without any sign of a corresponding rise in neighbouring states. She said the argument about protecting women from backstreet abortionists had merit, but questioned if the British response of de facto state-provided abortion on demand was a “proportionate response to that reality”.

Alice Czajka, the director of the Pregnancy Centres Network, said despite the huge differences in abortion laws and context from the US, the Supreme Court ruling was bound to restart conversations in Britain about abortion. McLatchie agreed, arguing the most seismic impact would be reiterating to British people, on both the pro-life and pro-choice sides of the argument, that “the question is not settled”. “It’s one of the most fundamentally important questions in my lifetime – how do we support equality for all people, no matter how big or small?”

Makinde agreed, suggesting the end of Roe had opened a window for the British church to re-enter the national conversation on abortion. “In many respects, abortion has fallen off our radar. By and large, in our churches, we don’t have language for what it is to discuss pregnancy and abortion well. I do think this is a unique opportunity for the Christian church to take hold of this cultural moment – not to try and win political games or gain cultural currency, but to make it a conversation again.”

She lamented the approach of some of the religious right in America, however, which had allowed Christians to be “politically hijacked” on the issue, and said the UK Church must avoid becoming co-opted by right-wing anti-abortion factions here. Instead, there was a chance to step up in areas such as fostering, adoption, pregnancy counselling and support, as well as modelling compassionate, respectful dialogue around how our laws can balance the rights and needs of both pregnant women and their unborn children. “That’s the opportunity away from the fluff of the culture war,” she concluded.

This is a unique opportunity for the British church

But Brennan suggested a different tack for British believers in the wake of the Supreme Court’s abolition of Roe. Rather than aiming to depoliticise the issue of abortion, he said the ruling should energise the UK anti-abortion movement. The time was right to step up teaching on abortion in church and public advocacy in the streets, he argued. “I think you want to engage wisely, [but] culture wars needn’t be an embarrassment or something to be avoided, per se.” While the pro-life movement in the UK was smaller and weaker than its American counterpart, polls showed significant numbers of British people backed reducing the time limit for abortions, so there was a foothold for Christians hoping to eventually emulate the US and repeal the Abortion Act. He pointed to American Christians who had voted for Donald Trump as president because they trusted him to appoint pro-life justices to the Supreme Court as an example to follow. While believers mustn’t become single-issue voters, Christians must junk a political ethos which prefers “polite, fine-looking” pro-abortion politician such as Barack Obama or Joe Biden over the brash, flawed but pro-life Trump.

But many in the British church are not on board with this response to the end of Roe. Czajka said the Supreme Court’s decision did not change anything for the crisis pregnancy centres she worked with, which remained committed to non-directive counselling rather than legal lobbying. It would be a “disservice to the cause of Jesus Christ” if the church simply celebrated the closure of US abortion clinics, Makinde said, without reaching out to those devastated by the news. Many well-intentioned people have believed the “lie” that abortion was necessary for women to flourish equally in society. Rather than revelling in their victory, Christians must reach across the aisle and seek to understand their bewildered opponents, she argued. “To together see a genuinely life-affirming culture where women are released to participate at all levels of society and not see their reproductive capacity as in the way of that… and also to be a culture that affirms preborn life.”