I’m a pro-life Christian, but here’s why I’m not rejoicing over Roe v Wade

Not all Christians are overjoyed at last week’s US Supreme Court ruling on abortion. Here’s why Megan Cornwell is still concerned 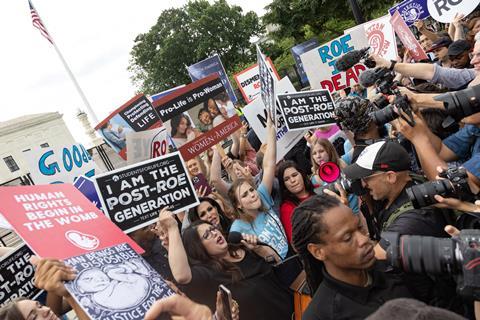 For as long as I can remember I have been pro-life. Like many other Christians around the world I believe that life begins at conception and should end naturally. I hold that every human being is made in the image of God and that life is sacred. I also think that abortion, in any circumstances, is heart-breaking

So when I read the news this weekend that the US Supreme Court had overturned its historic abortion ruling, Roe v Wade, which gives women the right to terminate a pregnancy, I should have been overjoyed. But I wasn’t. And here’s why:

The World Health Organisation estimates that 32 million unsafe abortions happen every single year. This latest ruling won’t result in fewer abortions taking place, it will result in them going underground, leading to immeasurable harm for desperate women pursuing illegal and unsafe means to terminate their pregnancies. Victims of incest and rape – abused children and women – could, in some US States, be forced to give birth, exacerbating their trauma. This doesn’t make me think of the love and grace of Jesus, but of the millstones and heavy burdens placed on people’s shoulders by the Pharisees (Matthew 23:4).

2. It will adversely affect women of colour and women from low-income backgrounds

In 2019, the abortion rate for black women in America was 23.8 per 1,000 women. For Hispanic women, it was 11.7 per 1,000. And for white women, it was 6.6 per 1,000. Half of all women who seek an abortion live below the poverty line. That tells us something important. The overturning of Roe v Wade will only make inequalities more entrenched. Women who can afford to will simply travel to states where they can terminate their pregnancies. Women who can’t will struggle to feed another mouth and clothe another body, sustaining the socio-economic inequalities that Christians should be railing against.

If a change to abortion law isn’t accompanied by welfare reform then disadvantaged women will suffer, which brings me to my third point…

3. It’s not accompanied by holistic policy-making

Hospital fees for having an uncomplicated birth can cost, on average, $10,808 in the United States. Figures vary, but total costs, or the cost of a Caesarean section, can be significantly higher. Even for low-wage families who rely on Obamacare health plans, there are often hundreds of dollars to pay in insurance premiums every year. In short, the US doesn’t have a free healthcare system like we do in the UK, so pregnant mothers (not fathers – more on that later) will shoulder the financial burden of bringing a new life into the world. This comes at a time when the cost of living crisis is driving more and more people further into poverty.

America is one of the worst countries in the rich world for maternal rights and benefits. It is the only OECD nation without national statutory paid maternity, paternity or parental leave. The Family and Medical Leave Act requires some employers to provide the bare minimum - twelve weeks of unpaid leave – but only 60 per cent of workers are eligible for even this paltry package.

The fact that American women are forced to return to work a mere twelve weeks after giving birth (if they’re lucky!), when they are still healing physically and emotionally from labour, is barbaric. I would expect American Christians to be calling for a radical overhaul of maternity rights and social security to ensure that families have the proper support to nurture new life. On this, those same Christians celebrating abortion bans, are silent.

As well as improvements to leave and pay, for the women forced to continue unwanted pregnancies, I would expect a tranche of public money poured into mental health services. Becoming a parent is one of the most challenging periods in a person’s life. Those families forced to welcome an unexpected (and perhaps unwanted) baby into their lives will need substantial psychological support. Is this being seen as a priority for legislators, or Christians celebrating the overturning of Roe v Wade? I don’t think so.

4. What about the fathers?

In this whole abortion debate, we rarely hear the word ‘father’ mentioned. It’s almost as if a baby appears in a womb as if by magic. It’s good and right that the men who father these children shoulder the burden and responsibility for them, so why are men being left out of this conversation?

In the UK, fewer than half of eligible children receive anything at all in child maintenance payments from their fathers. And single parents are currently owed nearly half a billion in unpaid child maintenance. The proportion of families without a child maintenance arrangement reached a whopping 44 per cent in 2019-2020, up 25 per cent on nearly a decade ago.

I don’t claim to know all the ins and outs of the American system, but what I do know from looking at the UK context is that child support isn’t enough and is notoriously difficult to police. This leaves women in a precarious position, shouldering not just the mental and emotional load of having children, but the financial one, too.

If legislation is being changed that will disproportionately affect women, there should be corresponding laws requiring men to share the financial burden. Writing in The Guardian earlier this year, columnist Polly Toynbee said: “If anyone doubts that society remains run by and for men, the quiet story of fathers being allowed to get away with refusal to pay for their children should be evidence enough.” She has previously suggested laws to make reneging on payments akin to tax fraud or avoidance. Failing to do so puts equality and hard-won women’s rights back centuries. Again, I don’t see Christians publicly calling this out.

5. It will lead to more children in care

One of the expected outcomes of changes to Roe v Wade is an increase in the number of children being placed in the US care system. Are those rejoicing at the news also ready to provide a safe and loving home for one or more children who will be born into a lifetime of institutional care?

Adoption is thankfully something Christians already think and care about, but how many of us actually step up and step out? American Christians who are passionately pro-life must now be ready to open their homes and hearts to children in desperate need of families.

In a perfect world abortion wouldn’t exist. But we don’t live in a perfect world yet. We live in a fallen, broken world. One where women and children are raped, where fathers desert mothers and refuse – or fail – to support their children financially, and where governments decline to provide the support needed for families to thrive. As Christians, we should absolutely pray and campaign for change, as well as labour to grow kingdom values here on earth, but legislative reform can’t happen in isolation. If other structures and strongholds remain in place which oppress and disadvantage women, decisions such as the overturning of Roe v Wade will increase suffering, not alleviate it. And that’s why, despite being pro-life, I’m not rejoicing today at the news on abortion from across the pond.

To read an alternative view on why overturning Roe v Wade should be welcomed by Christians, read Lois McLatchie’s piece here