Should church leaders be forced to break confidentiality and report abuse?

If the Government brings in mandatory reporting, church leaders would be legally bound to disclose any instances of abuse they hear about during Confession. Would the move bring necessary reform to protect society’s most vulnerable, or constitute unjust interference with religious freedom? Tim Wyatt speaks to those on both sides of the debate 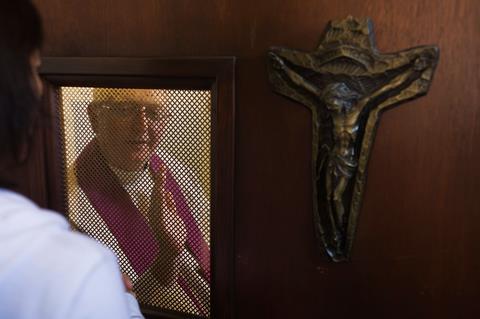 A journey which had begun with furore and controversy – the then Home Secretary Theresa May ordered the inquiry in 2014 amid fears of a Jimmy Savile-style abuse scandal lurking among high-level Westminster politics – ended in a sober yet devastating 468-page document.

In the end, there was no evidence of a network of paedophiles operating in government circles. Instead, IICSA’s report begins with more than 100 pages of testimonies from victims and survivors of child abuse. And among the horrifying accounts are plenty from those who suffered at the hands of vicars and priests, bishops and monks. Out of IICSA’s 17 formal investigations it carried out, an astonishing seven were focused on abuse linked to the Church.

There are a lengthy list of recommendations from IICSA. But the most eye-catching call, for both secular society and Christians, was mandatory reporting.

Mandatory reporting means the government would bring in a new law creating criminal penalties for anyone in a designated position (mostly those working with children or in a position of trust) who becomes aware of child abuse and does not report it to the police. It has long been a demand from victims’ groups and many children’s charities, but has also been resisted by some within the Church, especially traditions which value the historic confidentiality of confession.

If the government does follow through on IICSA’s report, it would mean if a priest hears a confession from either a child abuser or their victim in which they talk about the abuse, they are legally bound to pass this information on. If they do not do so, they could be prosecuted, fined or even imprisoned.

But in both the Church of England and the Catholic Church, this new law would clash with centuries-old religious law, as both denominations have strict rules which forbid a priest to disclose anything heard during confession with anyone else.

IICSA’s call for mandatory reporting reignited a simmering row that has been going on for years, particularly within the Church of England. For some years the CofE has already had its own duty to report allegations of abuse on all clergy and church workers, but it has an exemption for any details gathered under what is known as the “seal of the confessional”.

Canon law dating back to 1603 means that priests who hear a penitent’s confession have a duty to not disclose it to anyone, ever. However, more recent guidelines state the priest should refuse to give the abuser absolution until they have first reported themselves to the police.

Confession is not a common practice in the CofE, but it is cherished by the Anglo-Catholic wing of the Church, which has strongly resisted any calls to soften the rules around confidentiality. Many argue that it is exceedingly rare for either victims or abusers to disclose during confession anyway, and that breaking confidentiality would make it less likely for victims to have the confidence to come forward and receive the pastoral care of a priest as well.

But others are appalled at the idea the Church would demand special treatment to maintain its own internal rules in defiance of attempts to root out child abuse. Furthermore, the suggestion abusers never address their crimes during confession has been challenged, including by an Irish academic who conducted a study of clerical offenders. Eight of the nine priests she interviewed said they had talked about their abuse during confession. Several said the experience of being forgiven after confessing effectively “wiped the slate clean” and enabled them to minimise what they had done internally, making it much more likely they would continue offending in the future.

Jane Chevous, a survivor of church-related abuse and co-founder of the group Survivors’ Voices, said the resistance to mandatory reporting in confession was a “straw man” as statistically it was going to be a tiny number of cases. “But no, religion cannot make a moral argument that it is above the law, whatever the situation and however theologically difficult that is for us to sit with.” She herself had grown up in an Anglo-Catholic church and been to confession, but insisted the safety of children trumped everything else.

A decade ago it emerged that the former Dean of Manchester Cathedral, Robert Waddington, had been a prolific child abuser and had told his victims they could not blow the whistle on his crimes because he had already been absolved of his sin during confession. In response, the CofE’s bishops set up a committee to examine the question of the seal of the confessional. But when the working group reported back in 2019, it could not come to a conclusion on whether to create a child abuse exception and the status quo remained in place.

Despite this, the Church’s own head of safeguarding and their team are on the record stating their support for abolishing confessional confidentiality, and a second committee has been set up to look at the question again. In response to the IICSA report, the CofE’s lead bishop for safeguarding said they strongly supported mandatory reporting in general. However, on the question of the whether this should include breaking the confidentiality of confession, the bishop only said that a new working party was already considering this and “will now include this recommendation in its work”.

The centrality of confession

In the Catholic Church, where confession is a much more central part of parish life, there has been strong opposition to any kind of weakening of confessional confidentiality. The Church takes this so seriously it has at times even defrocked priests known to have breached the seal of the confessional.

Unlike the Anglicans, there has not been any meaningful voices within the Catholic Church calling for change or serious exploration of whether an abuse exemption could be made. In his evidence to IICSA, Cardinal Vincent Nichols, the leader of Catholics in England and Wales, said: “The seal is an essential part of the exercise of priesthood and I would defend the seal of the confession, absolutely.” He noted people in history have died to defend confessional confidentiality and said, “it might come to that”.

If the government followed IICSA’s lead and did introduce a mandatory reporting law to the UK for the first time, it would lead to civil disobedience by clergy, Cardinal Nichols warned.

This would follow the pattern set in other countries which have brought in mandatory reporting already. In Australia, Catholic bishops have publicly attacked such laws as undermining religious freedom and insisted priests will simply ignore their new requirements and keep all confessions secret. Similarly, in Ireland the official church safeguarding board’s own guidelines tell priests that they should only report disclosures when made outside of formal confession, in direct contravention of the law which has no exemption for confession.

A spokesperson for the Catholic Bishops of England and Wales said they took the IICSA report very seriously, and any recommendations which “pertain to the Catholic Church, including mandatory reporting, will need to be studied and considered very carefully”.

Beyond church leaders, the response to IICSA’s call for mandatory reporting has been positive, with victims’ groups, lawyers and advocates urging the government to legislate as soon as possible. Many have said in fact IICSA’s proposals do not go far enough, as they only criminalise those who fail to report after witnessing abuse or being told about it directly by either victim or perpetrator.

Richard Scorer, a lawyer who has acted for abuse victims in dozens of cases involving the church, said mandatory reporting should also include when people have “reasonable suspicion” abuse has occurred, even without any formal disclosure. “If you look at the religious settings we see investigated in the inquiry, in most cases people within the institution had at least a reasonable suspicion that abuse was going on,” he said. “What we want is to create a strong reporting obligation around that, backed up by criminal sanction. That’s particularly weak when it comes to religious settings – you do have a lot of recalcitrance and reluctance to report combined with strong cultural barriers for victims to disclose.”

The leading Christian safeguarding organisation Thirtyone:eight said they also backed mandatory reporting without any exceptions for confessional confidentiality. A spokeswoman noted this would be challenged for churches and other faith bodies but said: “We support measures and recommendations which ultimately put the welfare and safety of children above any practice that allows secrecy. We have to listen to children’s voices and we are broadly in support of mandatory reporting in regulated activities, including in that context [confession].”

The government has yet to indicate which of IICSA’s recommendations it will implement and so it remains at this stage unknown if a conflict over confessional confidentiality will actually happen. But the battle lines have been drawn and it seems neither side is ready to stand down.