Former Pope Benedict XVI argued the Catholic church can be trusted to self-police itself when accusations of abuse emerge. But a new report alleges Benedict failed to act over child abuse cases when he was archbishop of Munich. Human rights lawyer Richard Scorer says this “hypocrisy” is further evidence that the church must be forced to report abuse to secular authorities 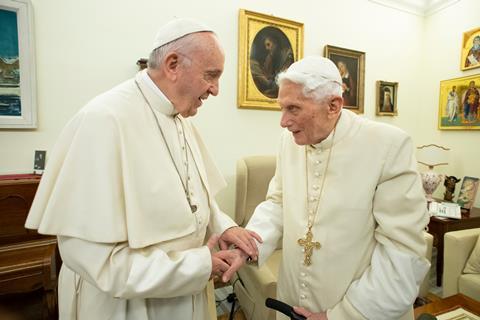 As the media reported last week, an investigation in Germany into historic abuse allegations has concluded that the former Pope Benedict XVI failed to act against four priests accused of sexual abuse when he was Archbishop of Munich.

The law firm commissioned to undertake the investigation said that two of these cases concerned abuse committed during his tenure as Archbishop and “in both cases, the perpetrators remained active in pastoral care”.

This news comes as no surprise to me. Questions about the former Pope’s actions in such cases when he was Archbishop of Munich have been around for years. The latest investigation seems to add more detail about events in Munich, particularly regarding Benedict’s personal culpability, but the basic pattern is depressingly familiar from Catholic abuse scandals worldwide. When allegations against paedophile priests came to light, police were not informed, and those priests were moved around from parish to parish to keep the scandal hidden. In one of the Munich cases, a priest was convicted of abusing children in 1986 and given a suspended prison sentence but was then allowed to continue working with children.

What are the wider implications for the church? Benedict himself, and his conservative supporters within the church, have long argued that the Catholic abuse crisis is a result of the church becoming too liberal following the Second Vatican Council and societal changes in the 1960s. In particular, Benedict and other conservatives maintain that the basic problem was that canon law (internal church law) fell into disuse and that within the church penal measures were no longer deployed against suspected abusers, leaving them free to abuse again. As Benedict put it, from the 1960s “the prevailing mentality was that the church must not be a church of laws but rather a church of love; she must not punish. Thus the awareness that punishment can be an act of love ceased to exist. This led to a darkening of the mind..” Therefore, Benedict argued, the solution to the clerical sex abuse crisis lay within the church itself – in particular, in stricter and more rigorous application of canon law, and better self-policing. This has remained the church’s basic mantra under Pope Benedict’s successor, and since 2005 the Vatican has issued various updates to canon law, claiming that these ‘reforms’ will tackle the crisis, and emphasising internal church measures rather than reporting to secular authorities, something about which the Vatican has always been notably unenthusiastic.

The clerical sex abuse crisis, however, shows no signs of abating. The Munich report confirms – if proof were needed - that Benedict himself was guilty of the very failings of which he accused others in the church, and many will focus on the obvious hypocrisy. Benedict – the Pope who argued that the church could solve this problem by self-policing – failed to self-police when faced with a scandal on his own doorstep. When the reputation of his own diocese was at stake, Benedict chose to sweep the problem under the carpet. This is surely the most important lesson of the report – when it comes to the clerical abuse scandal, self-policing always fails; even senior leaders who promise otherwise will try to protect the church’s reputation at the expense of children. No canonical edict from the Vatican will change this fundamental reality, exposed repeatedly again and again by reports like the latest one from Munich.

As I have repeatedly argued, the only way to tackle clerical sex abuse effectively is by mandatory reporting - a requirement, underpinned by secular criminal law, that known or suspected child abuse within the church must be reported to secular authorities so that it can be investigated and tackled independently of those who know the abuser and have a vested interest in covering up. As the Munich report demonstrates, whatever promises are made, when push comes to shove the church will give priority to protection of its own reputation, and self-policing never works. Despite yet another report confirming this undeniable fact, the Vatican remains fundamentally resistant to the idea of mandatory reporting of abuse allegations to secular authorities. In England and Wales, we await the final report from the Independent Inquiry into Child Sexual Abuse (IICSA), expected in a few months’ time. I hope this will include a clear endorsement of mandatory reporting, so that clerical sex abuse will be dealt with by secular authorities rather than by self-policing by a Catholic church which has demonstrated time and again that it is wholly incapable and unsuited to the task.

Richard ScorerRichard Scorer is Head of Abuse Law at Slater and Gordon, and author of Betrayed: The English Catholic Church and the Sex Abuse Crisis (Biteback Books)