Rev Richard Coles on grief, death and what heaven looks like

Having lost his husband David to alcoholic liver disease, Rev Richard Coles is set to explore grief in a new Channel 4 documentary. He tells Sam Hailes that bereavement never caused him to doubt his faith and argues it's a mistake to hold funerals that celebrate a person's life 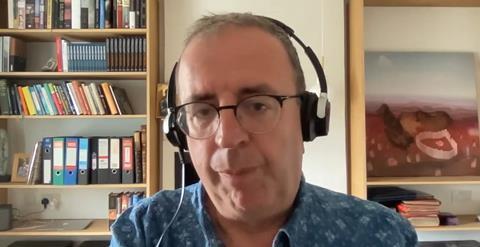 Good Grief will air on Channel 4 on Monday night. You try a few different ways of dealing with grief in the film. What were they?

No one’s grief conforms precisely to any pattern. It’s different for everybody, so I wanted to try a range of things. I got up close and personal with some alpacas who were charming, one of the few creatures whose breath seem to be worse than mine. Surfing - or rather, an old, overweight person trying to do surfing. Laughter yoga. I did a bit of skydiving, and I joined a ship with other bereaved people to spend some time together.

Did any of those things help?

Yes, I think they all have their merits. My favourite thing was boxing, which I didn’t see coming at all. I actually needed something physical, I think. Perhaps that’s partly to do with expressing the anger that you inevitably feel if someone has been taken from you.

Is it true that if you aren’t able to process or work through your grief on some level that it can be detrimental?

Lockdown happened very soon after David died. And for me, it was good. Because otherwise I would have worked and worked and worked as an avoidance strategy. I don’t really want to have to greet this grim visitor on the doorstep called bereavement every morning. But you have to let them in. Because they’re coming in anyway. They’ll kick your door down if you don’t open it.

Other cultures have lots of traditions around mourning and death. We don’t have many in British culture anymore, do we?

As a kid, I remember people would draw the curtains on the day of a funeral. Policeman used to salute the hearse. Traffic would stop. People would cross themselves. I’m not sure that always happens now. I think we’ve lost that. And with it, we lose really important resources because, obviously, we’re all gonna die. But also, if you’re lucky enough to spend your life with someone and you love them, and they love you, the chances are 50-50 that you’re going to be bereaved. And it’s worth thinking about that.

For the documentary we went to an island off the coast of Honduras. And in traditional culture there, they mark the anniversary of death with this huge drumming and dancing thing, which was wonderful. I remember saying to the guy, “this is great to celebrate that”. He said, “No, we’re sad.” And it may be there’s more than one way of being sad.

What’s the difference that Christian faith makes when it comes to grieving?

That’s an interesting one. People thought me being a Christian would mitigate the loss in some way. And of course, it doesn’t.

What you really want is not the consolation of heaven. You want Lazarus to emerge from the grave. You want the dead person to walk in the door and be living again, and it doesn’t happen. So that’s tough, there’s no way round that.

What about the Christian hope that death is not the end. That the person is in a better place. Does that give you some level of hope?

It’s different for different people. Someone said to me, because David’s death was particularly tragic, "Did it effect your faith?” And the answer is "no, not at all." Because my faith is not dependent on me getting a lucky break.

I doubted just about everything else. But I didn’t doubt [my faith]

I’ve always thought that faith is not particularly consoling, it’s much more about challenge.

Others I know, have had a very lively sense of the departed loved one having just “gone into the next room”.

I think one of the common mistakes that people make with funerals is they want it to be a celebration of the life because actually, the fact of the death is so awful, and so appalling, it’s unthinkable. So everyone will turn up wearing bright colours, and they want it all to be lovely. But actually, it is deeply sad. What has happened is really, really bad. And that has to be acknowledged and faced in one way or another. It’s the same thing with rushing them into heaven.

Death has been called the last taboo. The idea of a conversation about death is is still pretty awkward for most people.

I get into fights with friends about this, but I think one of the hallmarks of secularism is it prides itself on not needing the comforting mythologies of religion or faith to face the tough realities. But I think it’s exactly the other way around. It’s the secular world, which can’t even bring itself to say the word “death” and talks about people having “passed away”. And that produces this vocabulary of euphemism.

I’m sure in the process of conducting funerals in your ministry as a vicar, people have asked you, “where is my loved one now?” What’s your answer to that?

I try not to give answers, because I try to get alongside them in the question.

If people want to know that, I would say something pretty open, which is, "I don’t think anything good is ever lost." And, "I don’t think this is all there is." If you put those two together, then it seems to me that the promise that Jesus made to us in this world is fulfilled in the next world. And I live by that. And if that works for me, maybe it would work for others?

I’d love to have a more elaborate vision of heaven. I mean, to die and then see David coming towards me with all our dogs bounding through the meadows of Elysium. But I’m much more persuaded now by looking at things like the 15th century Botticelli illustrations of Divine Comedy. When the pilgrim gets to heaven, it just becomes geometry circles - the most likely visualized abstractions if I can put it that way - and maybe as I get older, I think that’s more helpful to me.

Do you wonder much about where David is now?

I think the compelling thing for me is that everything good in David endures in his individual reality. For secular people, individual reality disappears at the point of death, as brain activity ceases. My belief is that it endures. But it’s beyond suffering and pain, and separation. And it endures in the eternal unfading delight of God. And I think we know enough in this life of what that might be, to keep us interested.

That’s a very uplifting and positive portrayal of life after death. But what do you do with Jesus’ words about hell? He gave dire warnings about that subject, and it isn’t an easy one to talk about in modern Britain today. How do you make sense of it?

I think as modern Christians, our relation to that is no different from ancient Christians. I think that everything that is good in someone endures. I’d like to think that when push comes to shove and the offer is made, we would all accept it. The concept of hell is not one I struggle with. Whether anyone’s in it or not - that’s the difficult one.

I’m very reluctant to assign people their place in the hereafter. I think that’s God’s business. And the relationship we have with God, in God’s mercy, and wisdom and judgement is not for others to trespass on.

1 Thessalonians 4:13 is oft-quoted when it comes to grief in the Church. Paul says to Christians “do not grieve like the rest of mankind, who have no hope.” Has that idea been meaningful to you?

Yes absolutely. I was trained for the Priesthood at Mirfield, Anglican monastic community. When one of the monks dies, their funerals are held and the custom is to sing the Russian Kontakion. I don’t know if you know it, but just think of bearded guys with deep voices, singing in clouds of incense.

And that says it for me.

What are you hoping the film will achieve?

I want to encourage people to get together. So if you are grief stricken, to use a overused expression, reach out. Because you do need to reach out, and you’ll find other people who’ve been through that same thing. Sharing that is really important.

I’m a Christian who has the opportunity to stand in a more mainstream place than most others. I’m very conscious that we live in a world where lots of people are very alienated from the church, and very hostile to Christianity. And I sometimes think that if we are too "in your face", it alienates people and I don’t want to do that. I’d rather get alongside people and walk with them a bit of the way and see if that’s a fruitful experience.

That must be a very difficult task, because you can’t please everyone. You can’t go on TV and deliver a sermon - which might disappoint some Christians. But you’ll also receive criticism from the mainstream who might appreciate your work on grief but wish you’d keep the ‘God stuff’ out of it…

Well, you do get flack from everybody. But you can’t put your head over the parapet without people throwing things at you. And that’s fine, I have no problem with that. And also, I get things really wrong sometimes. And when I do, I deserve to be held to account for it. I want to be held to account for it, even if it doesn’t feel like it at the time.

I think the dog collar has done a lot of heavy lifting for me, because I don’t have to say anything - I just put it on - and then people know who I am.

People don’t sing the hymns anymore. They’re not interested in our preaching or our doctrine…but they are interested in people who do it. It’s a curious thing. There is something about the figure of the priest, the minister, the confessor, the pastor, that still resonates with people.

If you’re in a dog collar, and you take public transport, then amazingly frequently, someone will come and talk to you. And they’ll probably talk about the weather or the football. But before you know it, something comes up. And I sometimes think the dog collar is like a lightning conductor of conscience. People see the dog collar and it fires their conscience in some way.

Hear the full interview with Rev Richard Coles on The Profile podcast. As well as talking more about grief, Richard also shares his view on the current sexuality debates in the Church of England, and comments on this week's Lambeth Conference.