Kate Forbes: The rising political star on glorifying God and aiming for excellence

When she stepped in to deliver the Scottish budget with just two hours’ notice, Kate Forbes was thrust into the political spotlight 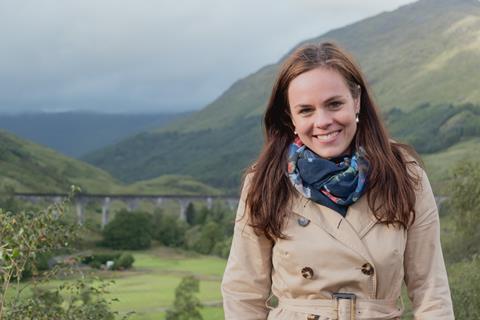 It was during a recent BBC interview that most people started to realise just how serious Kate Forbes, Scottish secretary for finance and the economy, is about her faith. The 31-year-old MSP told Nick Robinson: “To be straight, I believe in the person of Jesus Christ. I believe that he died for me, he saved me and that my calling is to serve and to love him and to serve and love my neighbours with all my heart and soul and mind and strength. So that, for me, is essential to my being. Politics will pass. I was a person before I was a politician and that person will continue to believe that I am made in the image of God.”

The Spectator picked up on the quote, praising her for boldness: “Forbes’ profession of faith is a small, humble act but one that took real political bravery. It will bring her no advantage and may well earn her more brickbats; it is more likely to hinder than help any designs she might have on her party’s leadership”, wrote Stephen Daisley.

Being in the public eye can tempt even the most faithful follower to grow quiet about their Christian beliefs. So, last February, when Forbes was given the job of delivering the Scottish budget with only a few hours’ notice (following the sudden resignation of the previous finance secretary), some may have doubted her steadfastness. But she has proved any naysayers wrong.

IT’S EASY TO TALK ABOUT THE FLAWS IN POLITICS, BUT TO ACTUALLY STEP UP AND DO SOMETHING ABOUT IT IS A LOT HARDER

In our conversation, she comes across as rigorous, bright and socially aware, thoroughly thinking through the choices that she makes. These characteristics have helped her to deal with the political and religious scrutiny that have come her way. Her natural confidence clearly enables her to speak boldly about her faith in Jesus Christ.

She’s also canny – in the sense that she manages to be bold about Christianity without putting her foot it in – using clever inference to communicate her faith: “If anybody looks at my career, they’ll see that I’m where I am by accident – or there’s another word perhaps that those of us with faith would use in such circumstances!”

Forbes is one of many Christian politicians in the Scottish National Party (SNP), which includes representatives from across the denominations. Figures such as Dr Lisa Cameron, David Linden, Carol Monaghan and Margaret Ferrier span Catholicism to evangelicalism, building a diverse party in which Forbes feels there is plenty of room to progress in her career and work out her faith. She has no problem with being ambitious, seeing it as using the gifts given to her by God, but recognises that there may be lines she will be unable to cross due to her faith. However her career progresses in the future, Forbes is a wonderful example of a politician who is able to hold their religious and political convictions together. Long may that continue.

Tell us a little bit about your upbringing and how you became a Christian.

I had a very strange upbringing that’s quite difficult to categorise. My parents always disagreed with the characterisation of them as missionaries. Growing up, reading stories of Hudson Taylor and Elisabeth Elliot, my sense of missionaries were of brave, courageous souls that ended up being martyred for their faith. We were a fairly ordinary family that found ourselves in India. My dad was involved with Bible teaching and he’s also an accountant, so he was managing the finances of a group of mission hospitals, trying to ensure that people were able to access free healthcare.

We felt quite removed from the great missionary journeys of David Livingstone but that meant, of course, our upbringing was between countries, cultures and backgrounds. Aged ten, I left my very safe primary school [in Scotland] and arrived in India to sit in a classroom with 60 other kids. If you got poor test results, you would feel a ruler on the palm of your hand. So while I had the safety and security of my own family, it felt like everything else had changed.

At the same time, we lived through an earthquake. It was hugely traumatic for those involved but dramatic for a young girl, seeing massive devastation, so many thousands of lives lost. And so a mixture of trying to find consistency in life and realising that my tomorrow wasn’t guaranteed brought me to Christ. 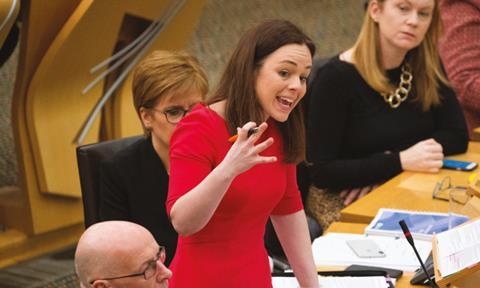 You left India aged 15 to study back in Scotland, and then found yourself working in finance – am I right?

That’s right. We came back to Scotland, then I went to study history at Cambridge and then ended up working for a bank in London and training as a chartered accountant.

Was there ever a moment you thought you would also be a missionary accountant?

I’d always vowed never to follow in my father’s footsteps, and that included accountancy. I don’t know how I ended up there, but I did! But you know, we were always taught that you had one life. Every second counted. Much had been given to us and, therefore, much would be expected from us. So irrespective of whether we were living unpaid, like my dad was for most of his adult life, or working in a bank, it boiled down to the same priorities: trying to serve others. Often we didn’t do that as well as we should have, but that was certainly the big objective that I was passed down from my parents.

And something led you to decide that politics was for you – what was that?

An accident! I was minding my own business, really, working as an accountant, and the opportunity came to stand for election. I really didn’t expect to be selected. I was up against some fairly impressive characters and I looked at myself, thinking I was too young, too immature, had too little life experience…but I went for it. When a door is opening, you’ve got to come up with a really good justification for not at least trying to go through it. And I had no great justification.

CHRISTIANS SHOULD BE AMBITIOUS FOR EXCELLENCE

It’s easy to talk about changing the world, or pontificate on the greed and flaws in political policy, but to actually step up and do something about it is a lot harder. That was a challenge that I wanted to see if I could rise to.

You’re not shy about talking about your faith and do it in a very respectful and appropriate way. But that obviously invites tricky questions. How do you prepare for them?

The first step is to know what you believe and why. Those of us in the Church, or with Christian friends, often just accept truth without ever querying it. It’s a lot easier to defend a position that you inherently believe than a position you just think Christians should hold.

The second thing is, you’ve got to figure out how to build a bridge to your listeners. I’ve made lots of mistakes along the way. I’ve got lots of things wrong. There is trial and error. Sometimes you connect, sometimes you don’t.

It’s asking: What relevance does the gospel have to the 21st Century UK? How would you sit next to somebody on a train and explain why you believe what you believe, because if it doesn’t resonate with them, then it’s not going to make sense on a podcast or in a media interview.

What is the world out there hearing when we speak? You’ve got to make sure they’re hearing what you intend to say, rather than hearing something because of all the baggage and filtering that goes on with Christian views. And just practise! I have got things so wrong in the past in media interviews, and when just speaking to friends and family. But through God’s grace, sometimes things connect in ways that I can’t control. 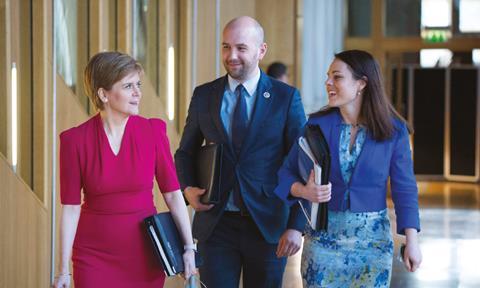 One of the things that’s always attracted me about the SNP is how diverse it is, from branch members all the way through to the Westminster group. That means people of diverse political views, backgrounds and religious views can come together. In government, inevitably, you need to settle on particular policy positions. And compromise is part and parcel of that. But all of those individuals will be figuring out where their red lines are, and that’s why I feel like there is a tolerance internally for me. There’s robust debate in private, and that should be the case. And then there’s a united front.

To paraphrase David Cameron: “I was the future once.” You definitely are. You’re in a very senior role at a relatively young age. Is it OK for a Christian to be ambitious for themselves and for their future?

If anybody looks at my career, they’ll see that I’m where I am by accident – or there’s another word perhaps that those of us with faith would use in such circumstances!

I think that Christians should absolutely be ambitious – for excellence. They should be ambitious to be the best they can be, not because they get praised but because we’ve all been given gifts and we will give an account for how we have used those. One of my all-time heroes is Eric Liddell. My favourite film is Chariots of Fire and he says in the film that when he runs, he feels God’s pleasure. He was made to run and he ran well, but he had his own red line – which, in his case, was not running on a Sunday. We all have our red lines but God has given each of us gifts – and he does not want us to keep those gifts in a locked box. He wants us to use those gifts and, in using them, so long as we are sending the praise back to him and not claiming the credit for ourselves, becoming prideful and conceited, then I think we have a duty to be ambitious.

We ultimately need to follow God’s leading. William Wilberforce famously decided ‘this far and no further’ in terms of his own political career because he could best serve at that level. So the ambition is for being excellent, not for status or position.

Listen to the full interview on Tim Farron’s A Mucky Business podcast. Download it at premierchristianradio.com/podcasts