Sojourner Truth: The slave who became a gospel preacher

Sojourner Truth confounded the expectations of her day for both women and black people. Her Christian faith led her to call out injustice wherever she saw it. Find out more about her inspiring life this Black History Month 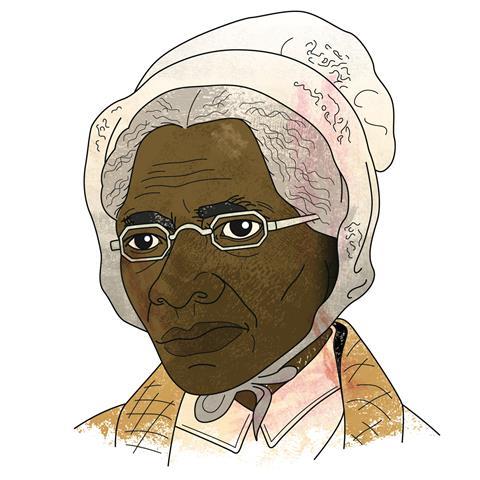 No one knows when the girl who would become Sojourner Truth was born, but her best guess was that it was between 1797 and 1800. Named simply Isabella, she was the youngest of ten or twelve children born to James and Betsy, Dutch-speaking black slaves in Ulster County, New York state. By the time Isabella was old enough to remember, only one brother remained, as all the other siblings had been sold. Some of Isabella’s earliest memories were of her parents’ tears over the children who had been taken from them.

Isabella’s mother instilled religion into her children as best she could, but Isabella was left with the impression of a distant God. She knew that she could appeal to him for help in trouble but had no inkling that he might disapprove of the oppression she and her fellow slaves faced.

At the age of nine, Isabella was sold. Her new mistress spoke no Dutch and Isabella spoke no English, meaning the young girl was often in trouble for offences she did not fully understand. Battered and unhappy, she prayed to God for her father to visit her, which he did, and she appealed to him for help. He managed to persuade a tavern-owning couple to buy Isabella from her current owners. Her physical situation was much improved but Isabella learned to smoke, drink and swear during her time at the tavern, habits that she would later struggle to kick.

Finally, aged about twelve, Isabella was sold to the Dumont family, where she would remain for the rest of her enslavement. Mrs Dumont disliked slaves but Mr Dumont was fond of Isabella and she worked tirelessly to please him.

Despite daily deprivation, Isabella took after her father, who had been nicknamed Bomefree, or tree, and grew to be tall and stately. Her first romantic relationship was violently ended by the young man’s owner, who did not want him to father children who would belong to Isabella’s master. Instead, Isabella settled down with Thomas, a man who had already seen two wives sold away from him. She had five children and was happy and proud to add them to Dumont’s wealth. Having grown up surrounded by people who accepted slavery as the right and proper order of things, Isabella, too, believed that white people had a perfect right to buy, sell and use black people. She could hope for nothing more than a good master and for her children to be sold to owners close enough that they could return for visits. Things were about to change, however, for New York state and for Isabella.

In 1817, the state of New York passed a law to emancipate adult slaves on 4 July 1827. Dumont offered to free Isabella a year early in return for her good service, but later reneged, saying that an injury to her hand had made her less productive. Riled by the injustice, Isabella worked extra hard to finish processing that year’s wool and then walked out one morning, taking her youngest child, Sophia, with her. She found work with the nearby Van Wagenens. Although opposed to slavery, Mr Van Wagenen agreed to pay Dumont a fee for Isabella and Sophia for the remainder of the year, making everything legal.

Even though the Van Wagenens had been kind, Isabella was tempted to return to Dumont for a festival (probably Pentecost), at which slaves would be included in the carousing. She was on the point of going back when she was overwhelmed by a vision of God. She became painfully aware of God’s omnipresence and goodness, and of her own moral corruption. “Oh God,” she exclaimed. “I did not know you were so big!” After the revelation, Isabella struggled with the problem of how to relate to a perfect God when she was so sinful, until a further vision of Jesus Christ provided her with an intercessor. Thus, at the age of about 30, she began her life as a free woman and a Christian.

IN HER OWN WORDS

“Let others say what they will of the efficacy of prayer, I believe in it, and I shall pray. Thank God! Yes, I shall always pray.”

“The Spirit calls me, and I must go.”

“If coloured men get their rights, and not coloured women theirs, you see, the coloured men will be masters over the women, and it will be just as bad as it was before.”

“You know, children, I don’t read such small stuff as letters, I read men and nations.”

“Truth is powerful and it prevails.”

Isabella’s first task was to reclaim her youngest son, Peter, who had been sold to slaver owners in Alabama, where there was no emancipation. With the help of some Quakers (who provided a bed for the night – the first she had ever slept in) she served a writ on the man who had illegally sold Peter out of the state and, after months of legal procedure, got her son back – scarred, traumatised and barely remembering his mother. For the next few years, Isabella’s main concern was providing for Peter and Sophia.

Post-emancipation New York was a hard place for ex-slaves. They faced terrible racism in the streets and their children were barred from public schools. Wages were low, and wages for black women were especially pathetic. After finding Sophia a job, Isabella moved to New York City. The big city was not good for Isabella or her son. Peter took to petty crime and, eventually, Isabella thought it best to send him to sea. They would never meet again. Isabella became involved with a cult led by ‘prophet’ Matthias, who abused her and expected her to work for free. The cult collapsed in scandal and Isabella lost whatever small savings she had. But the experience did not dim her religious enthusiasm.

In 1843, Isabella felt a call from God to go east and preach. She asked God for a new name and received Sojourner, because she would be an itinerant preacher for the rest of her life, and Truth, because she would speak the truth to people. Trusting God’s provision and taking almost nothing with her, she set off towards Connecticut and Massachusetts.

At first, Truth simply preached the gospel. Although she was illiterate, she had memorised large parts of the Bible by having it read to her, and her speeches were full of scriptural references, straight-talking and humour. Soon, however, she met abolitionists such as Frederick Douglass on the same speaking circuits and became part of the anti-slavery movement. Her days of thinking that slavery was justified were long behind her, and Truth now threw herself into the anti-slavery cause. In 1846 she collaborated with other abolitionists to write her memoir, The Narrative of Sojourner Truth (CreateSpace), which placed her story in the context of the brutal slavery that continued to exist in the southern states of America. Sales of this memoir supported Isabella in her work and even provided enough for her to buy her own house.

But slavery and racism were not the only injustices that Truth saw in the United States. She also met and befriended women’s suffrage activists, such as Susan B. Anthony, and started to speak on behalf of woman’s rights – usually as the only non-white speaker. Temperance and prison reform also became areas of interest. In 1851 she gave the speech for which she is most famous, Ain’t I a Woman? in which she ridiculed the idea that she, a former farm labourer, was too weak and delicate to be trusted with political rights.

Although they were all fighting social ills, there was sometimes hostility between the different movements in which she was involved. The feminist Lucretia Mott was not allowed to speak at the World Anti Slavery Convention in 1840 because she was a woman, and black advocates of temperance were expelled from the World Temperance Convention in 1853 on the basis of their race. Truth knew that the difficulties she had faced – and continued to face – were not just because she was black, or a woman, but because she was both. She worked across intersecting issues of social justice in a way that would not become mainstream for another 150 years.

Truth became well known in the USA on the strength of her Narrative and for her work during the Civil War, when she recruited soldiers for the Unionist force and fought for rights, land and improved conditions for freed slaves in the aftermath. She met three presidents (Abraham Lincoln, Andrew Johnson and Ulysses S Grant) but the meeting that brought her most joy was with her old master, Dumont. Now elderly, he admitted that he had come to understand that slavery was “the wickedest thing in the world”. With characteristic humour, Truth laughed to think that he was the one who had taught her not to steal while he had been stealing from her the whole time, by keeping her enslaved.

Truth lived into her mid-80s, spending her final years in Battle Creek, Michigan. Her contribution to the emancipation of woman and people of colour has not been forgotten. A new $10 bill is planned, featuring the images of Truth and other women’s liberation activists. Despite the undeniable prejudice and injustice that still exists, the legacy of Truth and her allies is found in the way that rights that once seemed preposterous for women or people of colour (voting, holding property, choosing who to marry) are now regarded as essential to any civilised country. Truth’s recognition of the way in which different forms of social oppression interact was farsighted, and the living faith and sheer determination with which she fought these evils continues to be an inspiration today.